Greetings! What a time to be alive! We’ve all been allowed to witness the glorious gift of the Elder Gods, Tyrod Taylor, make gizzards out of three opposing secondaries. This young legend was COMPLETELY left out of a certain ESPN analyst’s weekly quarterback rankings last week, and I for one believe he deserves to be fired for committing such a despicable act of disgracefulness. After Blake Bortles treated their secondary like a porta-potty the previous week, any respectable man would have to assume Tygod would drop a double-dose of feces on those peasants. I feel like I’m taking crazy pills! What are people not seeing?! This stallion has every skill-set imaginable and should only improve from here on out. I’m a TAD concerned with Taylor not having Watkins and McCoy in the arsenal this week against the Giants, but I believe he’ll make up for that just by taking off and running a lot more. By the way, the Giants are DEAD LAST in the NFL in pass yards given up. Suck that in for a second. Oooohweeee, the Rodfather is a top-5 option this week at QB and a must-own in all formats. If you wanna keep hating, I’ll grant you a front row seat into my induction into the “writers wing” of the NFL Hall of Fame (as long as Jay continues editing my work).

My dear friend, Justin Mason, (a fantasy podcast host) had the balls to tell me that Tygod would fall off once defenses figured him out and that they were running “high percentage plays”. Ummmm, Ma$e, by high percentage plays do you mean: diming it all over the damned field, throwing one of the best deep balls I’ve ever witnessed, and taking off and running for big yards when a play breaks down? If that’s what you meant, then yeah, you’re totally correct bruh. Say one thing or Justin Mason, he’s an intellectual. Super sweet tats though. The audacity that some of these Tyrod haters have is vomit inducing and downright pathetic. Shame and emotional distress will be thrust down upon the deniers by the Elder Gods. FEEL THEIR WRATH!  It has been written so just sit back and allow Tyrod and I to show us a whole new world.

Is Tyrod the next Michael Vick, only with superior ball security? 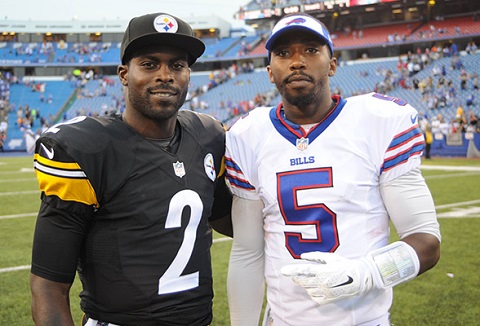 Blake Bortles – That Indy secondary is leakier than my urinary incontinent grandfather, and when you also figure that EVERY single game the Colts are involved in is a shootout, this should be no different. With Vontae Davis on Robinson, I fully expect Hurns to get one to two tubs this week but I’ll speak on that in Saturday’s column. Or write on it. Whatever. I’d much rather start a Bortles than, say, a Stafford or possibly even Eli Manning this week. Pootie tang with the arm game, show some respect.

Karlos Williams – Errone and dey Momma gon’ be starting this raging bull in DFS this week as LeSean McCoy is likely sitting, but I believe it’s still worth pounding into your brain with a sledgehammer. The Giants are somehow ranked second overall in run defense, giving up only 3.4 ypa, but be my guest if you continue to insist on doubting MY Buffalo Bills. You’ll wake up on Monday feeling like a city bus drove through your rectum.

Melvin Gordon – If not this week, then when? Cleveland is DEAD LAST in run defense and Latavius tha God just went hog wild on that ass so if Gordo is unable to produce 80-plus yards and a score against these peons, it’s almost a guarantee he won’t be in my delight section for the rest of the season. That was an insanely long sentence but if anything it just makes what I said more true… or nah?

Amari Cooper – After abusing Jimmy Smith and then Joe Haden, I’d have to be an absolute nut job to deny that Cooper is now a top-10 option at wideout each and every week from here on out. When factoring in that the Bears secondary has more penetrable holes than a Kardashian, Cooper could be a top-5 play in Week 4. Did I use that joke last week? Still funny…

Percy Harvin – Harvin looks great thus far and Tygod BARELY missed him on what would have been a 50-plus-yard TD in Week 3, which by the way would have caused me to simultaneously orgasm in my man thong, so if Watkins sits, expect an 100-yard day with a high probability of some runs mixed in.

Charles Clay – Again, the Giants have given up more passing yards than anyone and if Watkins sits, those yards have to go somewhere. Clay has been living up to expectations thus far and I expect him to be a top five play this week. Basically, anything Tyrod touches turns to gold. He’s that legendary.

Arizona Cardinals – Nick Fails comes to town and if he was unable to even dent that dumpster fire of a Steelers secondary, I would fully expect the Cardinals playmakers to make his mediocre talents fully apparent.

Teddy Bridgewater – How’s life on the Teddy train? Still riding for him or nah? This is a running team, folks, and the Broncos secondary is giving up an mind blowing 176 yards a game. Hopefully you put his ass on the waiver wire for Tyrod weeks ago. If not, Shame. Shame. Shame.

Matthew Stafford – The Lions offense has been abysmal thus far and traveling to Seattle is not the greatest place to get it humming. Expect multiple turnovers and an 0-4 start for the Lions. Stafford’s Lions are 3-31 against teams that finish with a winning record. They are 0-17 against those teams on the road. Yeah, WOW! It’s not going to happen this week. You’ve got to be realistic about these things.

Lamar Miller – I tire of bashing of this young man but it simply must be done. I was hammered for not having Miller ranked higher on my preseason list and now I hammer my naysayers in the chest with the mighty hammer of Thor. HIGHLY unlikely he gets it going against the Jets in jolly old England.

Ameer Abdullah – Best believe the Seahawks will be attempting to strip this fumbling machine on each and every touch, as he’s known to give it up easier than Lindsay Lohan on a Friday night in rehab. Expect nothing.

Charles Johnson – Remember how everyone was super high on Johnson before the season? Well, just like my thong modeling days, those are long gone. Cut bait.

Rishard Matthews – I’ve always been a Matthews fan but unfortunately he’s going against an incredible Jets secondary, so his string of miraculous games will no doubt come to a screeching halt. He’ll be back though.

Martellus Bennett – IF Clausen is at quarterback in Week 4, EVEN against a pathetic Raiders secondary, I’m looking at other options.

Thank you for joining me for another edition of Disgrace/Delight. As per usual your questions and comments will be responded to in the section below. I very much look forward to servicing you……