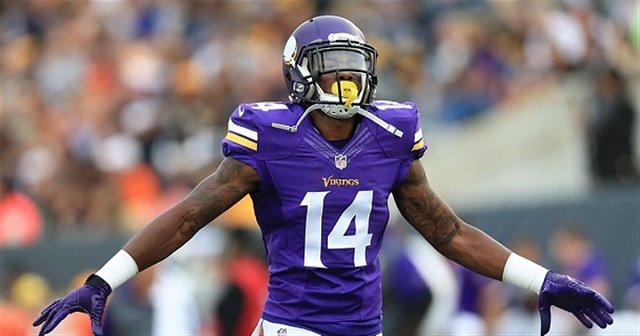 Wide receiver is a tough position to draft outside of the top 15.  Within the next 35 players of the preseason top 50, there are 10 guys who are going to outplay their ADP, maybe by a lot. There are also 10 other receivers getting hype, who just don’t live up to it, whether they are a complete bust or just somebody who frustrates you to put into your lineup every week.  I’ve been there, I drafted Kelvin Benjamin and Sammy Watkins on the same team last season.  This league is a two-keeper league and my keepers were ho-hum going into the draft, and I knew that I had to make a splash.  Doug Martin and Brandin Cooks were career hit or miss guys so I went high upside with my first couple of picks…

You guessed it, I finished last place in this league.  That’s a tough pill to swallow when you’re thought of as the guy in your league who writes about fantasy football.  If I would have gone with my gut, I would have picked someone safer like Jordy Nelson instead of Sammy Watkins, or anyone in the entire universe over Kelvin Benjamin and had a shot to compete.  Stefon Diggs just sticks out to me as one of those guys that my gut just tells me no, even though my bodyyyyy is telling me yessssss. I’m so sorry about that R. Kelly reference.  Bad taste, bad timing.

When you look at last season’s numbers as a whole, Stefon Diggs had a season that tells you there is some potential here.  Diggs had 903 yards receiving on 84 catches which was a pleasant surprise.  The fact of the matter is, if you subtract his two best games, you are left with 62 catches for 557 yards and two touchdowns in 12 games.  As a matter of fact, if you include his two outlier games, he only had 3 touchdowns all season.  Obviously, the talent is there to be able to have two games with 160+ yards.  Names like Brandin Cooks, Antonio Brown, and 2015 Allen Robinson come to mind when mentioning those single game numbers.

The ADP is what makes me cringe.  Stefon is the 28th wide receiver off of the board, and in 3 WR leagues that is a starter.  Even if you play in a 2 WR league with a flex spot, that is also a starter a lot of the time.  Diggs throws up some stinkers.  Diggs had 5 games last season where he had neither 50 receiving yards or a touchdown.

Sam Bradford has been in the NFL since 2010, yet he hasn’t thrown for 4,000 yards in a single season.  That doesn’t bode well for a high-upside receiver who failed to put together a full season when he had all of the momentum going his way.  Not to mention, the Vikings had an offensive line that completely stunk last year and didn’t get much better, besides Riley Reiff replacing Matt Khalil.

His teammate, Adam Thielen, is being drafted 42 picks later and had more receiving yards and touchdowns than Stefon Diggs on 15 fewer receptions last season.   There has to be some sort of improvement in the running game with the addition of Dalvin Cook through the NFL draft.  Even though he’s not my cup of tea this season, Laquon Treadwell is almost sure to see the field this season so the Vikings can see what he is made of.  For me, the insecurity of not getting consistent production out of Stefon Diggs heavily outweighs the possible upside.  I would rather have players such as Devante Parker, Corey Davis, and Willie Snead whom are all being drafted after Stefon Diggs.