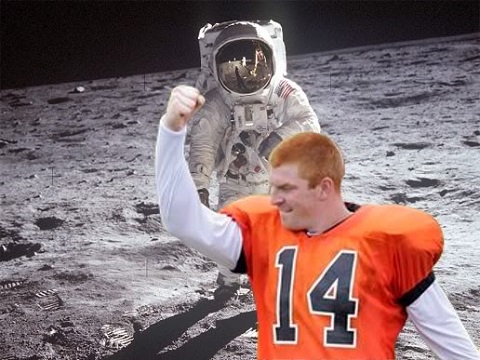 The first month of the season is already gone (or I guess more accurately, one quarter), but however you’d like to describe the passage of time this football season, one thing is eminently clear: there are a lot of undefeated teams. Six in fact. They are the Bengals, Broncos, Falcons, Packers, Panthers, and the Patriots (because there is no God). Out of those teams, it is my pedestrian opinion, only two teams have staying power to continue at an elite level all the way through to the Super Bowl, and that’s the Packers and the Patriots (because of the aforementioned God being missing in action.) The Bengals will once again go 12-4 and then 0-1 in the playoffs (until they tell me otherwise), Peyton Manning’s arm will probably fall off once December comes around, the Falcons have feasted on teams that measure right below suck, and the Panthers are pretty beat up. Plus, I don’t believe the NFL accepts playoff teams from the NFC South unless they are under .500. This kinda-sorta (close enough!) segues into the interesting Seahawks/Bengals game. Can Dalton continue playing above the Dalton line? Will Seattle’s offensive line continue to be about as effective as what recovery water is to concussions? Learn the answers to these questions and more!

Rankings have been updated for today’s games and can be found here.