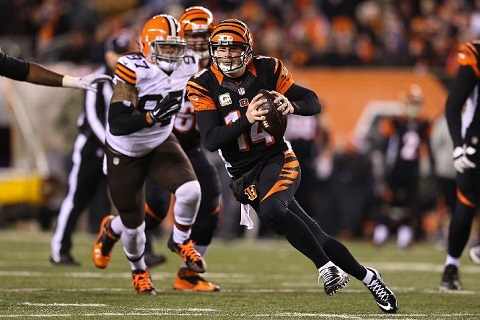 Well, that was an interesting game, said no one ever. To be honest, I’m not sure what I was expecting from a game featuring two teams that originate from the state that created Skyline Chili, but I suppose this would be a fair enough assessment of where they stand in all things. Whatever that means. For all intents and purposes, the game ended with a little over four minutes expired in the first quarter as Ben Tate rushed for a touchdown on a Browns possession that resulted from an early Andy Dalton interception. The two teams kept playing for the next two hours, though I have no idea why. Probably just to troll us. Thanks Ohio! In other news, the Browns have a winning record in November. Wait, what?

Brian Hoyer – 15/23, 198 YDS and 4 CAR, 1 YDS. Hoyer’s tour of the NFL hasn’t really been the best of all things. It’s kind of like the equivalent of leaving home to see the country, the wonders, the majesty, staking your own claim at life… and then at the age of 25, moving back in with your parents.

Jeremy Hill – 12 CAR, 55 YDS and 1 REC, 6 YDS. Okay, so let me get this straight. One fumble (in which a players helmet actually hit the ball and arm, making Hill’s fault for said fumble “murky” at best) and that’s it, bench time… as opposed to Andy Dalton’s continual stream of f*ck ups… Look, yeah, I get why you don’t bench a quarterback. But sending out your fifth string running back in a close game as a lesson just screams stupidity. Marvin Lewis ladies and gentlemen…