Well, what can you say about the Cleveland Browns that hasn’t already been said about, well, the Cleveland Browns? In what was billed as a “rivalry” on Thursday Night Football, I have to ask, if both teams have sucked for most of their history, can it be really called a rivalry? I’d lean towards the no group on that one, but that’s just me. That being said, the Bengals clearly have had the most recent success… at least in the regular season. But let’s go back to the Browns, seeing as Cincinatti appears to be on autopilot for their annual successful regular season run that will end in a one-and-done playoff loss, I have to say, the Browns did give us a valiant effort up until half-time. A stunningly competent Johnny Manziel and quite useful Duke Johnson Jr. helped keep the game close. Odd, as either the Browns are completely devastated about two minutes into a game, or they wait until the last two minutes to begin mass-producing sadness. Here, they were sort of wishy-washy, and I’m not sure if I should commend them or come away with disappointment. Then I realize it’s the Cleveland Browns and I stop caring… Like my wise mother once said: “Just be happy with what you have. There are plenty of people out there who have nothing. And then there are Browns fans.”

Gary Barnidge – 2 REC, 35 YDS. I read somewhere that the Colts are trying to get some new weapons for Andrew Luck, players he can better relate to, and have attempted to trade for Gary Barnidge. They’re also looking at DeSean Horsebuggy and T.J. Butterchurn.

Andy Dalton – 21/27, 234 YDS, 3 TD and 6 CAR, 5 YDS. I still don’t believe in this Andy Dalton. From my robust experience, Average Andy plus Primetime usually equals WTF ANDY. Good Andy plus Primetime usually equals Adequate Andy. I don’t even know how to gauge this or what the scale is anymore… I feel like this is an early warning sign of dementia.

Mohamed Sanu – 3 REC, 25 YDS, 1 CAR, 25 YDS, 1 TD. Congratulations to that person in the deepest league in America who has Sanu on their team. Here’s your insurmountable lead of 10ish points! 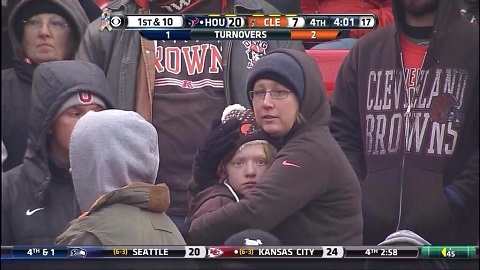