I’m not going to sugarcoat it, this team is an abomination. While the names on the jerseys indicate point scoring should be better, there is no excuse for being 150 points behind 7th place out of 8 teams. THERE’S ONLY 113 POINTS BETWEEN 7TH AND 1ST. Truly a special bunch, I haven’t seen this level of ineptitude since my son’s 3rd grade rendition of Macbeth. And the ending is projecting to be at least as tragic.

There really isn’t a trade to make as virtually no one on this team is playing very well, so any move would be selling low and not netting a return that is going to boost KJ up the standings. Being this far down the totem pole, you have little leverage in a redraft league. The players that should produce just need to start breaking out.

I do think that DeAndre Hopkins gets right this week. I expect Watson to force feed him against the Chiefs like he did Fuller last week. At RB, Le’Veon Bell has been seeing all the work but the Jets’ offense has been grounded since losing Sam Darnold to a spin-the-bottle mishap. LVB should see a bump in production, but I don’t know if it will be enough to pry this team from the dank crypt it currently resides in. TE continues to be a dead zone but there is surprisingly some hope on the wire. 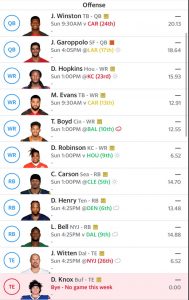 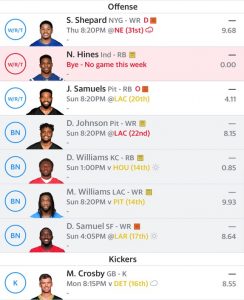 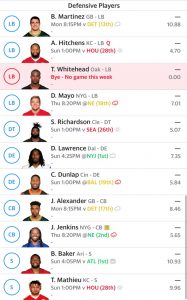 Looking at last week’s moves some were hits, but one regret stands out:

Neither QB topped 20 points, but they were improvements over Daniel Jones. Josh Allen found a way to score 1 more point than Jameis, not that it really mattered.

Well, we tried. I may be done trying to mine in San Francisco. There is a chance that no receiver from this offense is very relevant with them running at a league high rate, Kittle as the centerpiece when they do pass, and the defense playing well.

Was worth a shot, although Samuels’ biggest contribution this Sunday was an interception. And now he’s out for at least a month.

Hines led the Colts in receiving!… with 46 scoreless yards.

Jenkins gets picked up by KJ and has his lowest fantasy output all year.

How is it possible Dunlap didn’t register a sack against the Cards OL?

Wow a good decision! Mayo wasn’t a problem accounting for 5 tackles and 4 assists.

Take These and Call Me in the Morning

There is not a lot of game changing help on waivers this week, although these pieces may provide a spark.

Kenyan Drake, RB, MIA – Desperate times call for desperate measures. Drake is a member of the bottom feeding Miami Dolphins but his role should only grow with #BallageSZN being cancelled. The Dolphins look to earn their first win against the ghastly Redskins, and this is the best matchup Drake can ask for outside facing his own Dolphins defense every day in practice. UPDATE: Success!

Chase Edmonds, RB, ARI – If David Johnson is out, Edmonds slides right into an RB1 workload and he has the talent to produce. Maybe this is the break KJ needs. UPDATE: Success!

Gerald Everett, TE, LAR – Although KJ is unlikely to land Everett, we’re going to give it the ol’ college try. His 19 targets over the last 2 weeks are tantalizing. UPDATE: missed out.

Chris Herndon, TE, NYJ – I was happy to see him on waivers. He is a no brainer add coming off suspension and Darnold with a healthy spleen. UPDATE: missed out.

OJ Howard, TE, TB – It’s been a horrific start, but we’re swinging for the fences here. Howard offers the highest upside available if it all comes together. UPDATE: Success!

Noah Fant, TE, DEN – Really getting creative, at least Fant has a premium TE matchup against the Titans. UPDATE: I texted KJ to grab him as a free agent but hadn’t heard back at press time.

Don’t Get So Defensive!

(IDP info courtesy of the IDPguru.com and 4for4.com)

Linebacker – As I stated last week, when streaming LBs, the first step is to look for an every down linebacker who can rack up tackles, pass deflections and an occasional interception. KJ needs to replace Tahir Whitehead who is on bye. An easy choice is Patrick Onwuasor for the Ravens who is locked in playing 100% of Baltimore’s snaps. Also Anthony Hitchens may be injured for Kansas City and Todd Davis of Denver gets a very nice matchup against the Titans who run the ball a lot, creating plenty of tackle opportunities.

That’s it on defense this week. Unless someone is severely underperforming or gets injured there’s usually not a reason to make a ton of moves. Outside of someone lucking into a DTD, there probably isn’t a season changing move to make.

This is a last ditch effort to find a shred of hope in this season. When he came to me, KJ’s unit was pale and lifeless… and it still is. It’s only been 3 weeks but after only losing ground, this could be insurmountable. We’ve done the best we can, scoured the wire and sent some trades out (that got no bites). Ultimately, as KJ’s provider, I have to inform him that we may be at the end of the road. There is only so much our technology can do and every case has it’s breaking point.

Send your Ts and Ps to KJ during this difficult time. And if they’re not going against your team, maybe root a little but for some of his players.

On a bright note, P&E won again! They sit at 3-1 in their league. Granted it’s become pretty clear that anyone with a pulse and even the slightest effort can probably win this league but nonetheless, I celebrate victories.