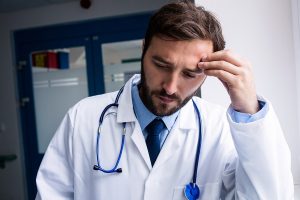 Hey, we weren’t last this week! But there is still a lot of work to be done. Sitting in 8th place (out of 8) after 4 weeks may require some drastic changes. Because this is a total points league and not weekly head to head, my plan is to treat this team like a daily fantasy tournament lineup. A consistent floor won’t get KJ where he wants to be, so we need to be shooting for upside to make up some ground. What we’re looking for is weekly waiver fill-ins who should get touches in high scoring games and hope for the best. If it crashes, well KJ is no worse for the wear.

Week 5 offers a few opportunities to add players on teams that have top 10 implied point totals such as Cincinnati and San Francisco. Players specifically in the Arizona/Cincinnati game are appealing as both teams play fast and have bad defenses. Good thing KJ already has Tyler Boyd. 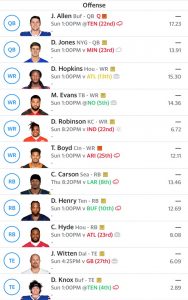 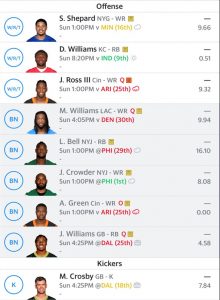 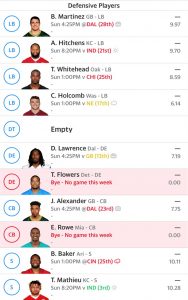 Looking at last week’s moves some were hits, but one regret stands out:

One step forward, one step back. DW 2.0 was great but Samuels is now someone who should be rostered after the Steelers got creative and gave Samuels 21 opportunities and he piled up 114 total yards and a score.

Knox was certainly more useful than AB, but Josh Allen’s predictable meltdown against Bill Belichick limited his production. We need to just stay away from the Patriots D in general.

Perhaps we dropped Mayfield too soon, and certainly Jones was not the right substitute despite a jackpot matchup. For the record the good doctor recommended Jameis Winston who went HAM for 30 points.

Both players are “whatever”. Although Williams is looking like he’ll miss time after a vicious hit on Thursday night.

KJ picked up Ross after he was dropped, which was smart, although now he’s injured for at least a month and can probably be dropped again.

You Could Stand To Lose A Few

There are a few Week 5 matchups that should be avoided and some injured players we’re going to have to cut loose. Because of the short, 4 man bench I recommend just cutting most of these players for better options that fit the needs of this team.

Daniel Jones (v. MIN) – Minnesota is bottom half in fantasy points allowed to QBs. I don’t think a rookie against this defense is a good idea.

Josh Allen (@TEN) – He may not even play, and if he did I wouldn’t try to exploit a matchup with the Titans who allow the 7th fewest points to opposing QBs.

Carlos Hyde (v. ATL) – The matchup isnt bad, but Hyde has yet to produce 10 fantasy points in a game. He’s the definition of low ceiling.

Sterling Shepard (v. MIN) – WR1 Golden Tate will be back, and the matchup is not favorable anyway.

Jameson Crowder (@PHI) – Normally we would target the Eagles’ 31st ranked secondary but not with Luke Falk weaponry.

John Ross III (v. ARI) – Elite matchup, too bad he won’t play. Ross is going to be out for at least a month.

Dawson Knox (@TEN) – See Allen, Josh. However, one positive is that the Titans are particularly forgiving against TEs. If Barkley starts maybe he will look towards Knox as a safety valve.

Take These and Call Me in the Morning

UPDATE – Got Deebo. Geronimo was taken. KJ hates the Bengals offense (I can’t blame him) so no go on Tate.

UPDATE – Graham was taken. We’ll roll with Witten and Knox.

Don’t Get So Defensive!

(IDP info courtesy of the IDPguru.com and 4for4.com)

Linebacker – The lifeblood of IDP is an every down linebacker who can rack up tackles, pass deflections and an occasional interception. One player I think KJ can stand to cut is Cole Holcomb who hasn’t played 70% of snaps since week 2. One replacement would be David Mayo who steps into an opportunity for snaps due to injuries on the Giants. This week is a good matchup as well as Minnesota allows 15 solo tackles to linebackers with their run heavy scheme.

Defensive Line – We’ve got some holes to fill along the DL this week due to byes as a DE and DT spot are open. Carlos Dunlap is available and jumps off the page going up against a Cardinals line that has allowed the most sacks in the NFL.  He should be a fine choice to wreak havoc on the field and in our lineup. This league has a DT specific spot so we’d be looking for run stuffers that can rack up tackles. This is a low scoring position, but we have to start someone and will go with Sheldon Richardson. He’s safe to produce about 5 fantasy points which will play.

I actually feel pretty good about this weeks lineup. Any time you’re attempting a run from the bottom to the top some lucky breaks need to fall for you. KJ is set up with some upside plays and should make up some points in week 5.

Changes to the starting lineup will be switching out the QBs, obviously adding Le’Veon Bell back in, and a likely FLEX trio of Hines, Johnson, and Darrel Williams. If KC is healthy and DW looks to be in a 3 man committee this weekend, I would sub in Deebo Samuel. Jaylen would probably get in over Hines if Conner (knee) is ruled out. With mid-week injuries seeming to pop up like never before, it’s good to have options.

For those that have been with Fantasy 911 since the beginning, our dear friends P&E are 2-1 after winning in week 4 and now officially can plug in MGIII this week. That squad is happy and healthy at the season’s quarter pole.