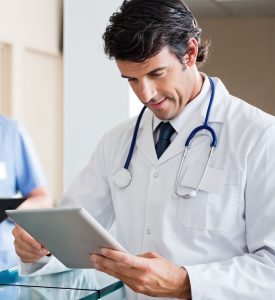 P&E came into the office today for a checkup and I am pleased to report excellent progress with a Week 1 victory!

They got exactly what the doctor ordered, and without a doubt the biggest development was Sammy Watkins. He turned in a historical performance, carrying P&E to an easy victory. Now with Tyreek Hill shelved for a while this team has 2 top 10 WRs to go along with Travis Kelce and Brandin Cooks. What’s more is that Devin Singletary played 70% of Buffalo’s snaps and looks to be one of the first late round RB darts to hit. 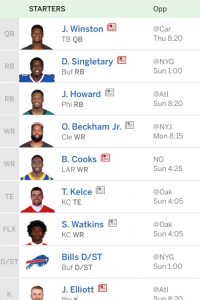 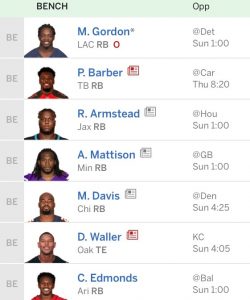 Week 2 matchup – BYE (strange setup with 13 teams, everyone gets a bye week)

We had to hit the week 0 waiver hard, and so P&E sits 10th in priority. Now that we’ve seen the games, let’s put our adds under the microscope:

Darren Waller – Eureka! Waller will be one of the hottest TE pickups after playing every snap and earning a 30% target share on Monday night.

Alexander Mattison – Despite being a pure handcuff, Mattison saw the field some in Minnesota’s blowout of Atlanta. He looked good and is one of the closest things to a league winning add should Dalvin Cook go down.

Mike Davis – He shared time in the uninspiring Chicago backfield with David Montgomery but was targeted 7 times which you love to see. What wasn’t so good is those targets yielded only 17 yards. Still, he remains a live body to sub in should P&E need an emergency RB.

Ryquell Armstead, Chase Edmonds – Both these players are handcuffs with zero current value. Still worth holding onto for now.

With the 10th position, P&E seemed unlikely to land any of the popular WR adds and there wasn’t a helpful RB on the wire. The priority does reset weekly, so we submitted a few moves looking ahead to week 3:

This will lock up the best defense for week 3 as Dallas will be at home vs. Miami’s roster of first year interns. UPDATE: success!

Barber looks to have already lost his footing in the battle with Ronald Jones and is unlikely to help P&E. We won’t get John Ross but in the interest of due diligence, I still suggested placing a claim. We’ll look to settle for one of the Colts WRs that could pop in the wake of Devin Funchess being sent to IR. UPDATE: success! Wow, Ross fell to P&E despite low waiver priority. This league certainly did not #overreact.

This is another luxury pickup, looking ahead to Cam’s week 3 tilt against Arizona. Both these players looked bad the opening week but Arizona should cure anyone’s ills. It appears we will follow a strict, matchup based QB regimen this season. Fortunately I am a board certified QB streamer. UPDATE: the patient decided against my advice and feels good about Jameis going forward.

We discussed the risks and benefits of trading Kelce although the beauty of a Week 1 win and an early bye is that there is no reason to press the issue. Cooks and Beckham are coming off bad games so not optimal trade chips at the moment.

Sammy Watkins is a good problem to have. Should he remain with P&E, he is the top target in the league’s most explosive offense. However, this unusual week 2 bye offers some interesting options. I like Watkins a lot so I didn’t want to rush to move him, but after careful consideration I suggested sending out an offer for Joe Mixon.

Mixon is coming off a dud where he suffered an ankle injury that doesn’t appear to be serious. Should P&E land Mixon, the bye removes any concerns for his availability this week and he would solve the gaping RB1 hole on the roster. UPDATE: trade is still pending, and if this group shows the same zeal for trades as they did for waivers, we may not be trading much.

This team is a testament to how quickly things can turn around! One sleeper (Singletary) and one key injury (Hill) injected life into this roster overnight. The RB position is still tender and healing, but we can rest through week 2 and hope the injury bug opens up more opportunities. P&E are somehow just one solid RB away from a legit playoff team, and left my office in good spirits.

There are no sit/start decisions this week.

Recovery is often a “one step forward, two steps back” process, so P&E are certainly not out of the woods yet. But at this time I remain hopeful of a full recovery. Check back in next week after the bye!

One correction from the previous article is that the league is PPR scoring, not standard. Just another example of how our subject is a poor historian.