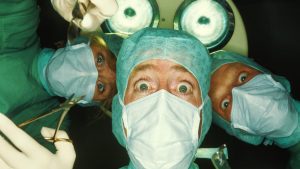 The other night I was sitting around, flipping channels when my phone started blowing up with “911” and then “we’ve got a bleeder!” The messages were from a friend of mine who isn’t much of a fantasy footballer but he and his wife (we’ll call them P&E) were wrangled into a couple’s league with some neighborhood friends. It is a 13 team, standard scoring league with a 1/2/2/1/1 starting roster. I watched in horror as the texts continued: 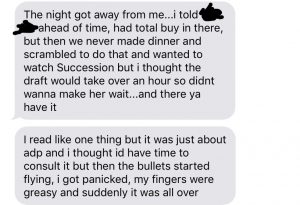 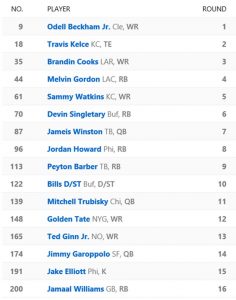 MGIII! Golden Tate! Singletary in the 6th! A 10th round DEFENSE! 3QBs!!!!!!!!! This was #ZeroRB but without the elite wide receivers. I knew it was going to be a long night, but I had to help my friends. I slipped into my scrubs and headed downstairs for emergency surgery. After interviewing the family, I found out that P&E didn’t know MGIII was a no show and also thought it was a 2QB league… but alas, it isn’t.  A few things had to happen right away, and I delicately gave my initial assessment.

“Well, there is an entire Garoppolo lodged in the anus and it appears a Trubisky has lanced the esophagus”

First things first, we have to clean the wound and that means removing useless quarterbacks in favor of high upside, lottery ticket running backs. I ordered heavy doses of Ryquell Armstead and Alexander Mattison. This at least stops the bleeding for now, but the only hope for RB is a workhorse that emerges due to injury. I don’t usually do this, but in this situation we needed to employ 2 full blown handcuffs.

Imagine drafting a suspended Golden Tate in a non-PPR league where you only start 2 WR and you have no RBs. For the record, Justin Jackson and Justice Hill were both available at that draft slot. Anyway, I cleansed the system of Tate and Ted Ginn, by administering antidotes Mike Davis and Chase Edmonds. These could turn into matchup plays at RB but also offer workhorse potential on good offenses in the event of an injury. I think we got this thing stabilized for the moment.

Because of the utter disregard for any semblance of a useful running back, Kelce may have to be sacrificed down the line. Before this can be attempted, I suggested adding Darren Waller and cutting Jamaal Williams, who hasn’t participated much this preseason. While he’s missed time the Packers have installed an offense that doesn’t fit his style. If Waller pops, it may be worth exploring a Kelce-for-RB deal.

Unfortunately, the first few weeks will be the darkest. An opening day backfield of Jordan Howard and Devin Singletary is ghastly. At least Howard has a perfect matchup against a Washington team that may give up by halftime. We’ll just have to hope he gets 15 carries and falls into the end zone. Singletary could be something, or he could get 8 touches in a 3 way committee. This team will certainly take its lumps, and will probably need to scratch out some low scoring slugfests in the early going.

“I’ll need to see you in follow up clinic”

Before I left the distraught drafters, we went over future plans. I will need to check in on the patient every few days for the first month. We’ll need to assess if the wounds are healing, if they are taking their medicine as prescribed, and what additional therapies are available. Of course, waiver wire action is vital to survival here and we’ll just have to take it one week at a time. The good news is that Beckham and Kelce can win weeks, pair that with being on the right side of some TD variance and maybe they can earn some breathing room.

This is one of the toughest cases I have seen in over a decade doing this line of work. The saddest part is it wasn’t even an auto-draft, this was actually a manually selected roster. I felt for my friend and his spouse in the aftermath, and my heart really went out to them in the midst of these unimaginable circumstances. As we shook hands, I said I did all I could and the only thing their team needed now was time.

I will be documenting their story this season so be sure and check back every Friday. I have received permission to share team record, roster moves and the entire process so we can all learn from this. Any one of us could find ourselves in a similar situation someday and it’s best to plan ahead. Maybe if we can all walk alongside P&E they won’t have to go at it alone. Maybe that’s what all this is really for anyway.