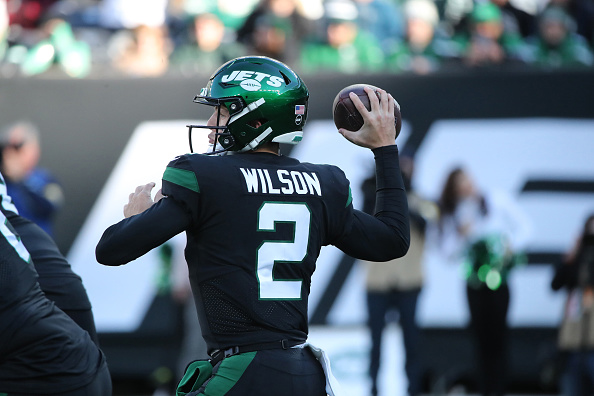 The 2021 NFL Draft was a special one with tons of top talents, including six rookies taken in the top 24 picks making the Pro Bowl. It was also unique because it featured five quarterbacks in the top 15 picks in Trevor Lawrence, Zach Wilson, Trey Lance, Justin Fields, and Mac Jones. Davis Mills also showed enough potential to make him Houston’s starter for this season. As we enter the second year of those passers’ careers, which one has the best chance to break out this season? This article will focus on the offseason moves made around the player and their support from personnel and coaching.

With the NFL Draft and Free Agency now wrapped up, we turn to the new season. Sports betting continues to expand into new states and new sportsbooks. If you are looking to join ahead of the NFL season, use Caesars Promo Code and BetMGM Bonus Code to get the best new-user bonus.

I had Justin Fields ranked ahead of Zach Wilson in the draft last year, but if I had to pick one to have the better career at this point, the answer is simple – it’s BYU’s Wilson. The Jets have simply done an expert job of supporting him with talent this offseason. The offensive line mostly stays intact from last year, with Laken Tomlinson joining the fold as a Pro Bowl guard from a season ago. The team’s putrid tight end room was also addressed in the offseason with the additions of C.J. Uzomah and Tyler Conklin.

The Jets also did a great job of adding talent in the draft. Garrett Wilson was my WR3 on the board, but there wasn’t much separation from Jameson Williams and Drake London for me. Wilson adds a dynamic element to the offense with elite YAC creation, smooth route-running, and surprisingly excellent contested-catch ability. It will also help that the Jets should have an improved defense as there will be less pressure on Wilson as a passer. The Jets also drafted Breece Hall, a durable, talented running back with a three-down skill set, and Jeremy Ruckert, an elite run-blocking tight end with untapped receiving potential.

The Jets may not have made any big splashes in the offseason, like trading for an established superstar receiver or making a big play for a veteran on defense, but this is the better approach. Joe Douglas is taking a much more measured, calculated approach to roster building than recent Jets’ front offices, and the big winner is Wilson, as he’s set up for a big step forward in Year Two.

The 49ers didn’t have to make any offseason moves, and they already would have been in a great spot to allow Trey Lance to come on strong this season. It’s hard to imagine a head coach I’d rather have coaching my young quarterback than Kyle Shanahan with his ability to make things easier for his passers with zone running concepts and short-area West Coast passing. That’s especially true on this Niners team with Trent Williams, the best left tackle in football, and a dynamic set of receivers in Deebo Samuel, George Kittle, and Brandon Aiyuk.

I would have loved to have seen the Niners add to their interior offensive line in the draft after losing Laken Tomlinson in free agency, especially with Alex Mack set to turn 37 years old this year. Still, Williams and Mike McGlinchey will help hold things down at the tackle spots. In the third round, the Niners did add Danny Gray, a discount deep threat who ran a 4.33-second 40-yard dash. It’s easy to see some Lance-Gray deep-ball connections in the future with his big arm. The rest of the Niners’ draft was fairly nondescript – Ty Davis-Price was a reach at #93, especially for a team that constantly finds undervalued running backs. Still, Spencer Burford is a decent developmental tackle. Regardless of the draft, the offense is well set up for Lance.

Trey Lance was always going to need a year to sit on the bench and adjust to the speed of the NFL game as he polished his field progressions, decision-making, and overall mechanics. However, as we enter his second season in the NFL and first as the starter, I have high hopes for what Lance can become.

The Jaguars had tons of draft capital and salary cap space to use as they hoped to forget a horrendous season under Urban Meyer, but they didn’t maximize their resources. Despite the signing of Brandon Scherff, the offensive line is arguably in even worse shape after the retirement of Brandon Linder and the departure of Andrew Norwell. Christian Kirk was given a big-money contract despite never having 1,000 yards in a season. Much of the rest of the team’s cap space was invested in the defense.

The Jaguars brought in Luke Fortner to presumably be their starting center in the draft. However, they also spent two premium draft picks on off-ball linebackers after signing Foyesade Oluokun to a top-five contract at the position. Not only is that a non-premium position, but you can only really play two linebackers at once in the modern NFL. Jacksonville used a first-round pick on Travis Etienne last year, and he missed the entire 2021 season with a foot injury. They’re hoping he can provide stability in the backfield with James Robinson’s Achilles injury severely limiting his potential production.

Partially just by the coaching upgrade from Urban Meyer to Doug Pederson, Trevor Lawrence should be expected to take a significant step forward. However, Jacksonville had among the most draft capital and salary cap space in the NFL and didn’t do enough with it. Unlike the Jets and 49ers, they will be leaning on their quarterback rather than fostering his growth by not putting pressure on him.

New England’s offseason started when Josh McDaniels became the new head coach of the Raiders and took several executives with him. While some Patriots fans aren’t the biggest supporters of McDaniels and his play-calling, it’s undoubtedly a hurdle for Jones to overcome as he enters this season with a new offensive coordinator. To make matters worse, the new offensive coordinator will presumably be some combination of Matt Patricia and Joe Judge – that’s… not great.

The Patriots’ acquisition of DeVante Parker on the cheap was commendable – he gives their offense a physical, contested-catch X-receiver they lacked in their receiver room. New England arguably overspent in their acquisitions from a season ago. However, Hunter Henry, Jonnu Smith, Nelson Agholor, and Kendrick Bourne will count for a combined $49.9 million against the cap this year. Tyqaun Thornton could theoretically offer a vertical element to the offense. Still, he’s very unpolished, and Cole Strange was a massive reach in the first round despite being a solid player. The draft didn’t do much to inspire more confidence in the offense.

Mac Jones was the only one of these second-year quarterbacks to make the Pro Bowl last season, and he led the Patriots to the playoffs last year. However, the attrition in the coaching staff and lack of significant improvement in the team’s skill-position corps limits his upside. The Patriots haven’t done enough to invest in their rookie-contract quarterback.

The Texans had a very nice draft overall, but they have a lot more work to do before their roster is close to competitive. In particular, I loved the addition of John Metchie as a slot receiver alongside Brandin Cooks and Nico Collins. Kenyon Green will be an immediate starter at guard and perhaps will get the chance to play tackle. Dameon Pierce was an excellent value at running back on Day 3, while teams reached on other prospects on Day 2. The additions of Derek Stingley Jr., Jalen Pitre, and Christian Harris will also improve the defense, making the team more competitive overall.

Nonetheless, it’s difficult to call this a phenomenal situation for Davis Mills. The Texans still have a putrid offensive line that won’t be fixed overnight by the selection of Green, which was arguably a reach with Zion Johnson and Tyler Smith still on the board. Still, new offensive coordinator Pep Hamilton has a solid track record with player development, including recently helping Justin Herbert win Offensive Rookie of the Year as the Chargers’ quarterbacks coach.

Davis Mills showed plenty last season as a third-round pick with the odds stacked against him to win another shot at the starting job this season, but he’ll have to overcome difficult circumstances once again. Still, by keeping Brandin Cooks and Laremy Tunsil in Houston, the team is doing right by Mills and giving him as much opportunity to succeed.

When I came up with the idea for this article, I already knew Justin Fields would be last on the list, and it’s sad to see how little the new Bears’ regime has invested in supporting the young quarterback. The free agency signings of Byron Pringle and Equanimeous St. Brown don’t do much to move the needle, especially with the offensive line still in putrid shape. After allowing the most sacks in the NFL last season, Chicago’s offensive line might somehow be in even worse shape this year.

However, with solid receiver and offensive line prospects on the board, the Bears’ decision not to attempt to help Fields was surprising. In the draft, Bears landed two solid defensive prospects in the second round in Kyler Gordon and Jaquan Brisker, who should start this year. Velus Jones Jr. was added in the third round, but he will turn 25 years old before the season and had never even had 300 yards in a season before last year, his sixth collegiate season.

The Bears clearly have the least talent in their pass-catching group and offensive line among the quarterbacks on this list. Darnell Mooney is an ascending talent, and David Montgomery is a solid running back. However, Chicago’s offense is mostly devoid of talent outside of Fields, Mooney, and Montgomery. That reality is incredibly concerning for Fields’s long-term trajectory in the NFL.