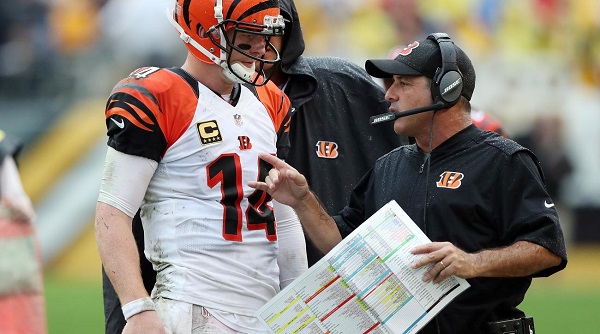 If you tuned into last week’s primer, you’ll know that the beginning of the season began the right way with large amounts of New England schadenfreude, which is pretty much the best kind of schadenfreude if you’re into that whole German thing. And I only mention this not as another opportunity to give my best to the Northeast (well…), but to segue into Week 2, where once again, things are starting off right (depending on how much you enjoy Skyline Chili) with the Cincinnati Bengals already in full playoffs mode. I’m not sure firing your offensive coordinator (and quarterbacks coach Bill Lazor, pew pew!) after your second game is the best thing to do, only because any time previously two weeks ago would have been gajillion times better. If the Bengals organization went into this season saying “Gee, Ken Zampese (and Bill Lazor, pew pew!) sure seems like he’s right on the cusp of something awful or something great. We’ll just gauge where he’s at on the awful-to-great scale on a week-to-week basis…” then maybe the actual problem is Mike Brown and the Bengals front office. And that Andy Dalton is a ginger…

Here’s your updated Razzball Fantasy Football Rankings for Week 2 (STD, Half-PPR, PPR, IDP) including our Staff Consensus, player updates, and an opportunity to ask those all so important roster questions to myself, MB, and Zach in the comment section!