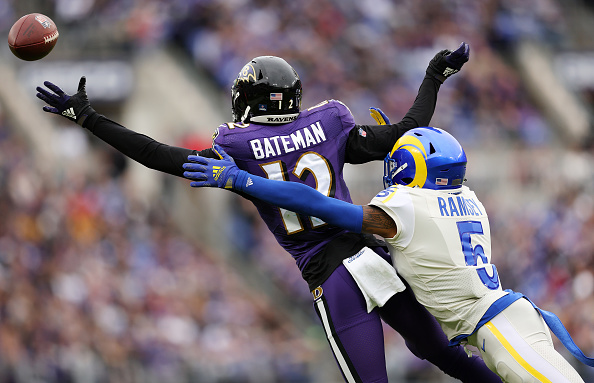 Every year, the NFL draft brings in new competition for veteran players, whether they like it or not. As the three-day event comes to a close, we can get a sense of how teams feel about their existing talent at various positions and long-term plans for the roster. Sometimes, the addition of players will be helpful, such as an offensive lineman or receiver for a quarterback. Other times, it’s harmful as a rookie running back can take away touches from the existing backfield. This article will identify a handful of winners and losers among veteran players from the 2022 NFL Draft.

I was a big fan of Rashod Bateman entering the draft with his crisp route-running, impressive collegiate production, and NFL-caliber size and length. However, the landing spot with the Ravens was tricky, with Marquise Brown entrenched as the top receiver in a low-volume passing offense. On Day 1 of the NFL draft this year, the Ravens traded Brown to the Cardinals, paving the way for Bateman to be the #1 receiver this year. Bateman should be poised for a sophomore breakout as a top-20 fantasy receiver without much-proven target competition.

Carter and Penny fall into the same category as the unlucky running backs whose teams drafted the top two backs in this class in Breece Hall and Kenneth Walker III. If a team is investing a top-40 pick in the running back, they likely want that player to be an every-down player on offense, leaving Carter and Penny looking in as incumbents on the outside. Carter had a solid rookie season but dealt with injuries last year, and Rashaad Penny has dealt with injuries for his entire career. Both are good late-round options in redraft leagues, but I’d be looking to sell both for whatever value you can in dynasty formats.

With the Saints projected to draft a quarterback after procuring a second first-round pick in this draft, Jameis Winston could have been a loser in this column. However, the Saints instead added to their wide receiver room, which was in desparate need of talent, and added an offensive tackle in Trevor Penning to replace Terron Armstead. While I didn’t love the value in the trade, and I’m not the biggest fan of Penning, there’s no doubt that these moves were made to make the most of this season with Winston as the starter and a top-12 QB finish isn’t overtly outlandish for this season with Olave and a hopefully healthy Michael Thomas catching passes.

A.J. Brown certainly won’t feel like a loser after his four-year, $100 million extension with the Eagles following their trade acquisition of the superstar receiver. However, the new landing spot for Brown represents a hit to his fantasy value. Tennessee and Philadelphia were in the bottom ten for passing attempts last season. Still, Brown was often the only legitimate receiving weapon for the Titans last year, with Julio Jones struggling to stay on the field. He’ll be competing for targets in Philly with the ascendant Devonta Smith and the steady Dallas Goedert. With Jalen Hurts a less accurate passer than Ryan Tannehill, it wouldn’t be shocking to see Brown fall outside the top-12 receivers, even if he can play an entire season.

Many draft pundits expected the Lions to come out of this weekend with a quarterback, but Brad Holmes and his staff put their chips into Jared Goff, at least for one more season. That isn’t surprising as Holmes was part of the staff with the Rams that drafted Goff. The Lions’ passing offense will also benefit from the addition of Jameson Williams, an elite field-stretching vertical threat who should open everything up underneath for Amon-Ra St. Brown, T.J. Hockenson, and D’Andre Swift. With one of the better offensive lines in the league, this offense is sneakily very talented, and it wouldn’t be shocking to see Goff have some fantasy utility this year.

The Bears didn’t have a first-round pick at their disposal, but with two second-round picks to work with in the draft this year, they were expected to add some legitimate talent for Justin Fields. Instead, they drafted two secondary players who can become long-term building blocks for the defense. Those were fine picks in isolation, but new general manager Ryan Poles hasn’t shown much urgency in supporting his second-year quarterback. Fields flashed some great talent last year, but the Chicago offensive line will again be one of the worst in the league, and the skill position rooms are very limited outside of Darnell Mooney and David Montgomery.

I’m writing this after the news that DeAndre Hopkins will be suspended for the first six games of the 2022 season after violating the NFL’s PED policy, which only helps further boost Marquise Brown’s stock. He’s the vertical receiver the Cardinals were missing in their offense, and with Christian Kirk now in Jacksonville, there are plenty of targets up for grabs. Baltimore’s offense was due for overall passing volume regression with the defense and running backs getting healthy, so Brown was unlikely to see the target volume as last year. In Arizona, he’ll be the #1 target at least for the first six weeks of the season, and I will likely have him as a low-end WR1 or high-end WR2 for this season.

The Chiefs didn’t draft a wide receiver in the first round like many expected, but they drafted a player who excels from the slot in the second round in Skyy Moore. The Western Michigan product represents an immediate threat to Smith-Schuster’s snap share from the slot this season, where he does his best work. The Chiefs only gave Smith-Schuster a one-year contract, so they won’t be terribly committed to him past this season, and Moore is an incredibly talented receiver who I had higher ranked than Jahan Dotson and Treylon Burks. It might be time to see what you can get in a trade for JuJu in dynasty leagues.

These two veteran running backs will fit into a similar category as they will likely be first-round picks in redraft leagues, but fantasy owners won’t be thrilled when they hit the draft button. However, both have secured massive upgrades on the offensive line to help boost their productivity. In the first round, the Panthers selected Ikem Ekwonu, and the Giants selected Evan Neal, who are very talented run blockers. We can expect a heavy dose of the run game with murky quarterback situations for both teams. If McCaffrey and Barkley can stay healthy, which is a major “if” for both, the offensive line additions will be beneficial.

The Bills nearly signed J.D. McKissic in free agency before he balked and returned to Washington, so it’s not shocking to see them target James Cook in the draft. Cook will fill a similar role in their offense as an electric pass-catcher who’s essentially another wide receiver out of the backfield. His open-field elusiveness and refined route-running will earn him playing time right away. Singletary’s production exploded near the end of last season, but it’s unlikely he reaches those peaks again with Cook on the roster, and that was probably the right time to sell him in dynasty leagues.