The guys over at Fantasy Phenoms invited me to do a 12 team non-ppr mock draft the other day and here is how my team came out.  It had all its fingers and toes thankfully. 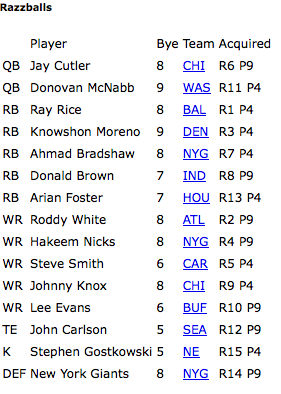 Out of all of my mocks so far I feel like this is one of my strongest, or at least most stable.  I had the #4 slot for the first time this season and I believe that had a lot to do with how my team turned out (yet another reason for auction drafts).  With the #4 you automatically get one of the Fab 4 and you don’t have to wait as long as you would with the #1 pick for your next player. And with one of the top 4 your options for the next pick seem better because no matter who you go with you can say, “well, at least I have so and so anchoring my team.”  And so and so is awesome!

So yeah, with my first pick Ray Rice was sitting there just waiting for me.  In non-ppr he’s probably who will be there at #4 and I feel completely fine with that, especially with the Ravens improving their offense.  He might not get quite as many touches, but he should stay a little fresher and have more scoring opportunities.

With my second pick I went with Roddy White.  With Rice in my pocket I felt like I was the best man at a wedding and Jessica Alba was the maid of honor with a drinking problem and a bit of resentment.  So I was feeling pretty good and didn’t want to miss out on a top receiver.  White is easily a top 10 receiver with top 5 upside as long as Ryan has a bit of a comeback season.

With my third pick I was glad to have Knowshon Moreno available.  I would be scared to have him as my #1 back, but at #2 I am happy.  He is the main back in what should be a more run oriented offense while they work at forgetting Brandon Marshall.

My fourth pick was Hakeem Nicks which sets me at two good backs and two good receivers, which is where I like to be at this point.  Nicks is getting a lot of hype, but I am on the hype machine.  Which probably means I should up Eli’s numbers bit.

Steve Smith fell to me with my fifth pick.  The Panther that is.  With his broken arm and down season he can be had at great value with season.  Just make sure you mention his arm in your draft chat in case your league mates aren’t up on current events.  Delhomme put a damper on his numbers last season and Moore put the opposite of damper on his numbers late in the season.

With my sixth pick I went with Mr. Jay Cutler.  I’m grabbing Cutler in most of my drafts and I think he’ll be worth it, but of course he’s not Peyton Manning, so I’m making sure I have a decent backup.

Number seven went to Ahmad Bradshaw.  You’ve seen why I like him and I think he makes a good flex option.  This is a 2 RB league with a flex so my 3rd RB doesn’t have to be an every down starter since I can throw a WR in there if Bradshaw just isn’t getting the carries I think he will/should.

The eighth pick went to another RB I like a lot, Donald Brown.  I believe Bradshaw and Brown make a great flex pair.  They can be interchanged based on matchup and projected use.

Johnny Knox was my ninth pick and my 3rd starter.  Yes, I took a backup RB before I grabbed my starting WR or TE.  I felt like it was more important to have an upside RB than an upside WR.  And Knox is an extreme upside WR.  Right now the whole fantasy world is trying to decide who will be the top receivers under Martz, and Knox is currently the #2, with a chance at being #1 (just like all three of the Bears’ receivers).  I think he is safe for a few deep TDs no matter how he is used.

With upside Knox as my third receiver I wanted a little more stability backing him up.  So with my tenth pick I went with Lee Evans.  The Bills passing game isn’t stable, but Evans is.  He is the best receiver by a wide margin on the team and with TO gone, he will get the bulk of the targets.

With Cutler leading my team I needed a stable backup, and Donovan McNabb is that.  The Redskins’ receivers leave a lot to be desired so I don’t see McNabb having huge games, but he doesn’t throw picks like Cutler and will have Cooley and Moss to make sure he doesn’t get shut out.

My main TE Zach Miller went off the board quicker than usual so I missed out and decided to just grab the best upside pick in round 13 and that was John Carlson.  He was used more as a blocker last season which was the worst way to use a pass catching TE.  This year there will be more 2 TE sets in Seattle which will allow Carlson to go back to catching passes.

I was happy to get a possible starting RB in the 14th round in Arian Foster.  Yes, Ben Tate and Steve Slaton make Foster risky, but not in round 14.  And if Foster starts out strong he’ll make good trade bait to help fill an early hole in your lineup.