Granted, there isn’t a rich history to draw from in terms of “quality football” on Thursdays, but you have to think that this being an actual Sunday Night production, coupled with the fact that we actually haven’t had a real game in what feels like decades, I’m pretty sure I would have been enamored if it was the Vikings playing against the Titans (which we’ll actually receive this Sunday! Wooo?). That being said, the game was actually pretty good on the scale of Graham Gano to those muscles in your arm that benefit the most if you’re throwing a penalty flag. (I mean, there were so many flags this game, it felt more like a United Nations summit, amirite?) Both teams looked sluggish throughout though, which was probably to be expected in the first game of the season. The Broncos and Panthers burned a lot of timeouts too, each for their own derpy reasons. For Denver, they seemingly forgot to count and had multiple downs where 12 men were on the field. For Carolina, five total timeouts from both halves were wasted because of terrible clock management by Newton (though I’m pretty sure Jerry Richardson was only upset with three-fifths of them). In fact, Andy Reid probably uploaded all these timeouts to his PornHUB account. That being said, I have to add that I found myself pretty frustrated with the continued non-calls on what were some brutal hits to Cam Newton. There were at least three blatant roughing the passer calls that were missed (or ignored?), and the last hit, late in the fourth quarter that actually drew a flag (you can see it after the jump), which was a helmet spear of all things, was offset by an intentional grounding. Oh, okay then, that makes sense. But the game was close throughout and quite entertaining, and due to the fact that Trevor Siemian flirted between the lines of profoundly mediocre and downright awful, the Panthers had a chance with seven seconds to win the game with a 44-yard field goal attempt in altitude… so yeah, we know how that turned out. Congrats to your 0-1 undefeated Panthers! Wait a second…

Kelvin Benjamin – 6 REC, 91 YDS, 15.2 AVG, 1 TD. All about the Benjamins! I am the master of timely references! And yes, in retrospect, my ranking was very conservative (40 in Standard and 41 in PPR), and while it sometimes helps you guys and gals for me to be aggressive with such things, I just didn’t feel confidant enough. That’s my olive branch to everyone out there who left him on the bench (like myself). Or we can even call it olive oil if you, are in fact, a fan of Mediterranean food.

Cam Newton – 18/33, 194 YDS, 5.9 AVG, 1 TD, 1 INT, 69.5 RTG and 11 CAR, 54 YDS, 4.9 AVG, 1 TD. “Uh, yes occifer? I’d like yum fries, a large-to-medium cheese pizza, and a diet fruit. My address? Man, f*ck if I know. I’m Ca…Kat…Cam…f*cking… hey, honey, what’s my last name again? Right, Newton. Occifer, I’m Fig f*cking Newton. You know what’s up.” And by the way, I’m just going to assume that he’s having this conversation not with an actual police officer, but with a coat rack. And despite all the brain damage, did anyone catch him flossing his teeth during the third quarter? My instinctive reaction is to defend him, but let’s be honest, flossing on the sidelines is pretty odd. I mean, why can’t he do normal things while the defense is on the field? Like taxes?

Greg Olsen – 7 REC, 73 YDS, 10.4 AVG. Hey Bears fans, remember when Mike Martz thought that the offense didn’t need a tight end who could catch the ball so he traded Olsen away? Because I’m not reminded about that every time he catches the ball.

Jonathan Stewart – 15 CAR, 64 YDS, 4.3 AVG. If Newton actually survives this season, I’m pretty sure he’s going to vulture all of Stewart’s touchdowns this year… JUST A FEELING GUYS. Granted, he still looked pretty good last night despite their overall offensive issues and I’m still an advocate… but I’m a little worried. I mean, you trust the Panthers’ run game now, but you just wait until they replace Jonathan Stewart with Trevor Noah and tell me how you feel.

Trevor Siemian – 18/26, 178 YDS, 6.8 AVG, 1 TD, 2 INT, 69.1 RTG and 5 CAR, 20 YDS, 4.0 AVG. Is it just me or does he look like Nick Sobotka‘s character from The Wire? Now, I’m sure there are some out there in Colorado that weren’t too excited that Siemian was named the starter, especially last night when he pretty much threw six interceptions with four ending up as lucky drops. But look, first, he spent all of last season under the tutelage of Peyton Manning. (Though, part of me doesn’t really believe this because I didn’t hear him shout “OMAHA!” the entire game.) Second, it was either going to be him or this guy. And lastly, would you rather watch Paxton Lynch or Trevor Siemian go out and throw six interceptions over and over again? Okay, actually, as a Chargers fan, I’m good with either of those options. I’ll just say that I’m shocked at the fact that Kubiak can make a dump-off quarterback out of anyone. SHOCKED! And oh, before I move on, I want to take note that the Panthers just lost to Northwestern’s second best quarterback in 2014. Think about that for a second. Let it breathe for a while…

Dear Panthers fans, I’ve included some instructions on how to deal with last nights game. Due to the difficulty level and overall complexity, please pay special attention to them. God bless. 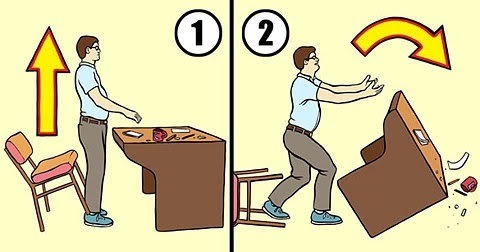