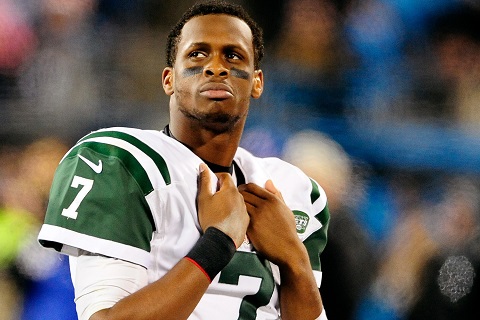 Well, Steve Smith wasn’t actually there to throw the punch, but I’d like to think that in loving memory of Smith’s brilliant and punch-happy career, reserve linebacker IK Enemkpali (which, coincidentally, is the name of a Somali pirate   dinghy…) sucker-punched Geno Smith, breaking his jaw and sending to the sideline for six-to-ten weeks.

“It was nothing to do with football. … It was very childish,” coach Todd Bowles said. “He got cold-cocked … sucker punched, whatever you want to call it, in the jaw. He’s got a broken jaw, a fractured jaw.”

The Somali   dinghy was a sixth-round pick back in 2014, and was immediately released by the Jets. I don’t know about you guys, but a successful career in the NFL is usual predicated with not knocking out your own quarterback for more than half the season. I’d have to think this is the last time we hear the name IK Enemkpali. Unless the Patriots sign him as a reclamation project, only to see Tom Brady sucker-punched. Then his name would be: Hero.

While the fantasy impact is minimal, I’d argue that this may have saved some deep format owners from drafting what is probably one of the most frustrating starting quarterbacks (in both fantasy and the real game) that exists. Though, there is still E.J. Manuel… but I guess he’s not a starter anymore. So there’s that. I always joke that watching one Geno Smith game was the equivalent of Tony Romo’s career in a nutshell. He’ll quickly coordinate a 70-yard drive inside the five, then promptly throw a pick-six. I’ll say that it’s hard to question his “gusto”, as he clearly has a fierce competitiveness and wears a gauntlet of emotions on his sleeve, but his erratic accuracy and sometime questionable decisions seems like something that will always dampen his ceiling.

But hey, that means we get to see Ryan Fitzpatrick in a starting role once again. That can’t be that bad, right? Eh, no comment.