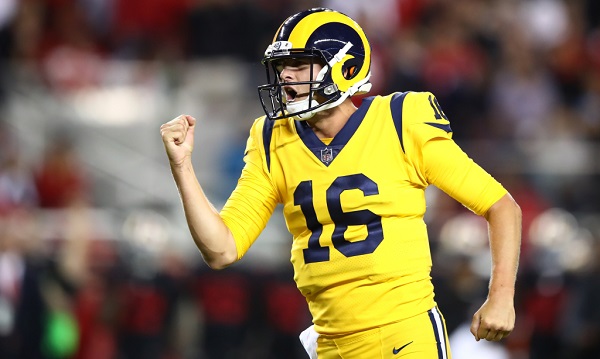 Jared Goff and Brock Osweiler – The QB landscape this week in our territory is downright pitiful. Dalton, Goff, Manning, McCown, Bortles, Brissett, Flacco, Cutler, Hundley, Osweiler, Stanton, Beathard. Them’s the pickings right there below 65% in Yahoo leagues. Jacoby Brissett has made this article multiple times this year and you can bet he’s one I’m willing to play this week. The Texans D was carved up by Russell Wilson last week and there could be more of the same coming for this week. If I’m begrudgingly picking two more from this group, I’ll take Jared Goff and Brock Osweiler. For Brock – maybe it’s a good thing that he’s playing on the road. At least the boos will be consistant for him all game as opposed to having the Denver home crowd give him the buisness if he comes out to a slow start. Goff and Dalton are probably the top talent options from that group, and with Dalton drawing the Jags, let’s pick on the Giants a bit (because everyone else is). Only 5 teams give up more passing yards per game than the Giants, and the boys in blue will be without Janoris Jenkins this week for a violation of team rules. But let’s just hope you aren’t fishing from this pool this week.

Greg Olsen – Owned in less than 50% of Yahoo leagues. If you’re in a decent position to make the playoffs, I’d bite on Olsen early. We’re still 3 weeks away from his return, but you know what they say about the early bird and the worm. Similar timetables in play for both Charles Clay and CJ Fiedorowicz, but they don’t have the appeal for me that Olsen does, especially with Kelvin Benjamin now out of Carolina.

Vernon Davis – Surprise! Jordan Reed is hurt! The Redskins need to find something going in their receiving game outside of Chris Thompson. You’ve got Terrelle Pryor pining for the good ol Browns, Jamison Crowder’s big week after doing basically nothing all season, and Josh Doctson doing nothing but catching TDs really. The other consistent thing is Vernon going over 50 yards, as he’s done it more games than not this year. The Seahawks D hasn’t had to play many great QBs this week, and while “great” may be a bit of a stretch for Kirk Cousins, he’s going to be a test for this Seattle D that was just punished by Deshaun Watson(or DeSauce as I’ve started referring to him).

AJ Derby – I will table the Adam Shaheen talk with the Bears being on bye (and it’d have to be an insanely deep league for me to roll those bones), but let’s talk about what’s going on in Denver. With Osweiler back for the Broncos, if Denver fans want flashbacks, they want the positive ones of him hooking up with Owen Daniels and Vernon Davis, making them semi-viable options back in 2015. Jake Butt is now practicing with the team, but there’s still a chance he just gets shut down for the year. Derby will have the role until then, and could get a heavier workload if the front in Philly is up in Brock’s grill.

Saints D/ST – The Bucs will be more of a challenge this week for the Saints than the Bears were last week, but I think it’s one that New Orleans should meet fairly well. Jameis Winston isn’t only having issues with his shoulder, but he doesn’t have great history against the Saints. In 4 matchups with them, he has only surpassed 210 passing yards once, last year on Christmas Eve wherehe threw for 277 yards. That same Christmas Eve provided him with 2 TDs, which is half of the 4 total he’s thrown against the Saints in his career. The Bucs have lost their last 4 and you’d hope they come out with some fire. I expect the spiral to continue a bit.

Raiders D/ST – We haven’t really gotten into trade deadline stuff, so let’s do a bit of that. The Dolphins are now without Jay Ajayi, and while I was not a big Ajayi guy this year (or any year really), it still hurts. Not to mention that everyone that said “oh Matt Moore can’t be worse than Jay Cutler” was instantly shut up when the Ravens hung a 40 burger shutout on them with the devestating one-two punch of Joe Flacco and Ryan Mallett. Smoking Jay should be back this week bumming his way to an INT or two and the Raiders could be a sneaky play if someone else already snapped up the good plays.

Josh Lambo – Who doesn’t love the 2017 version of the Jaguars? They are top 12 in both yards and points per game and this may just be the new reality here. Exit Jason Myers and enter Josh Lambo, and you’ve got a party. At least as much fun as you can have with kickers I guess….. LET’S GET WEIRD!