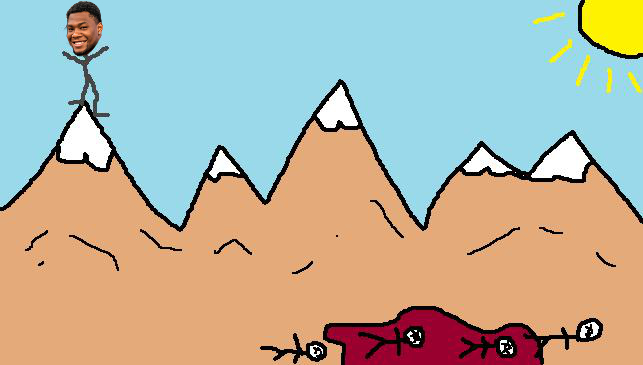 At home. Drawing pictures. Of mountain tops. With him on top. Lemon yellow sun. Arms raised in a V… Every Forte owner that handcuffed him with Jeremy Langford didn’t miss a beat this past weekend. And the owners that were able to snag him from the waiver wire were just as happy. With Matt Forte out with an MCL injury, Langford was given the start and as Eddie has said thousands of times over the years, “Jeremy spoke in class today”. He did so with 142 all purpose yards. He carried the ball 18 times for 72 yards and touchdown and caught 3 receptions for another 70. The touchdown was his third of the season. Forte has only two. On the season Forte is averaging 78 yards rushing and 27.3 yards receiving per game. His 548 yards on the ground on 136 carries comes to 4.03 yards per carry. Langford averaged 4 yards per carry on Monday night. Like I said, Matt Fore who? Ok, now maybe that’s a bit harsh. After all, coming into this game the Chargers defense was giving up 116 rushing yards per game. Only Cleveland had given up more. San Diego’s defense was also near the bottom with respect to receiving yards yielded to opposing running backs. Needless to say this is somewhat of an unfair sample. Nonetheless, it might make for an interesting situation in Chicago when Forte is ready to return.

So who else is going to join King Jeremy the Wicked in this week’s iteration of Who Are These Guys?

Matt Cassell – Cassel had a decent game Sunday night against the Eagles, completing 25 of 38 pass attempts for 299 yards. He threw 3 touchdowns and only 1 interception. Decent stats, but I have absolutely no interest. And neither should you. Even with the questions circulating of Tony Romo sitting the rest of the season if their playoff chances are slim, Cassel does nothing for me. He’s on this list cause he managed 24.66 points in his overtime game.

James Starks – I’m not sure if this should be about how pathetic Eddie Lacy has been or how Starks doesn’t really excite me. Last week James of House Starks was given an opportunity because Lacy has been terrible. Plus he fumbled and was dealing with a groin issue. Starks carried the ball ten times for 39 yards. One of those runs was a 15-yarder. That means he had 24 yards on his other 9 carries (2.6 ypc). Where he did shine was with his 6 receptions for 83 yards and a touchdown. I have no idea what we will see out of Starks as we move forward. How much Lacy plays is obviously the big factor. But even if they share the load, are you really going to want to start Starks? If you can grab him, grab him. And then trade him to the Lacy owner.

Cole Beasley – Unless your name is Gerrit Cole or Cole Hamels, I really don’t have much interest in you. Even if you did have an awesome game this week. Beasley caught 9 of 11 targets for 112 yards and 2 scores. Given his stat lines coming into this game, these results are certainly the outlier. I really don’t want any part of any of the Cowboys. McFadden might be the only guy I’d be interested in. I almost forgot about Cole Trickle.

Devin Funchess – Have you met his alter ego, David Boringcheckers? Here we have yet another player on today’s team that I have zero interest in owning. Three catches for 71 yards and a touchdown seem like numbers I can easily match on a weekly basis. Check mate.

Richard Rodgers – Rodgers to Rodgers. That’s when Aaron passes to Richard. Rodger that! Unsurprisingly I’m sure, here we have another player that will never find himself in my real fantasy lineup. “Real fantasy”. How’s that for an oxymoron. Rodgers saw a season high in targets (9), catching 5 of them for a whopping 19 yards. Why the hell is he on this list you ask? Two of those receptions were touchdowns. Damnit Rodger! Rodger Rodger.

Owen Daniels – Why not conclude today’s post with another player I don’t want on my team. He did have 6 catches for 102 yards and a touchdown, but I’m still going to have to take a pass. He’s done little to nothing the rest of the season and I’m pretty sure he won’t do much moving forward.

And he hit me with a surprise left…