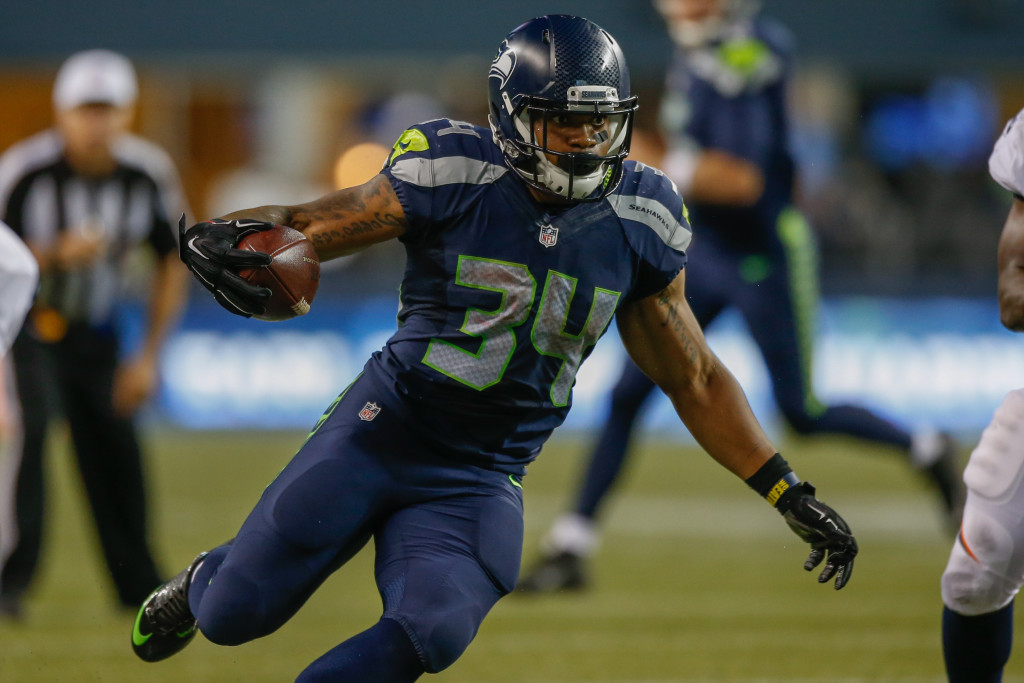 If the Seahawks-Niners game had been on Monday night, the title to this post might have been “Monday Night Rawl“. There was no way I was going to deny Thomas Rawls of his duly earned honors and bury the lede on this one. I had every intention of taking a page out of my own book and replaying what I said back in week 6 when I was fired up about Rawls. Unfortunately it seems that fellow writer Doug had the same idea when he titled his Through The Wire post. Allow myself to plagiarize myself. I guess it’s not really plagiarism if I am repurposing my own words. Here is what I said back in week 6. “The fact that he is only 47% owned is a little baffling. With Lynch out for the second straight week, Rawls should have been picked up everywhere. Especially by Lynch owners. Those that picked him up (like me) and started him (like me) were rewarded with 169 yards rushing and a score. He now has two 100+ yard rushing games. Lynch has none. Keep rawlin, rawlin, rawlin, rawlin…” And that’s me quoting me. I’m going to give Doug the benefit of the doubt and assume that he didn’t read that post. Besides, we’re one big happy family here at Razzball.

Speaking of which, did I mention that I am currently 10-1 in the Razzball Writer’s League and, as of last week, sixth overall in the RCL standings. And with two of the five teams ahead of me losing this week, I have a decent chance of moving on up to a deluxe apartment in the sky. George Jefferson style!

Week after week I have managed to piecemeal a team together using the scraps I am able to find on the majority of waiver wires in Yahoo! fantasy leagues that is strong enough to beat just about any team, any week. Obviously with the benefit of hindsight, cherry picking these needles in the haystack is not much of an impressive feat. The intent of this exercise is to prove that Waldo can be found.

This week’s lineup combined for 191.3 fantasy points and contains only one player owned in at least 40% of leagues.

Brock Osweiler – When Brock Lesnar bulldozed his way into the WWE, he was nicknamed “The Next Big Thing”. Last week another Brock introduced himself to the world. Osweiler threw for 250 yards and 2 touchdowns as he helped the Denver Broncos stop a two game losing skid in the first start of his NFL career. The guy he replaced was a quarterback named Peyton Manning. Perhaps you’ve heard of him. Hopefully you don’t own him, as he is having the worst season of his career and at this point can be safely dropped. Is Osweiler the next big thing? I would temper expectations. At least for this season. With bye weeks out of the way, I don’t think Brock is a player that needs to be rostered. Is it me or does he remind you of Jason Street from the Dillon Panthers?

Thomas Rawls – It’s time to rawl out the red carpet. With Marshawn Lynch expected to miss at least a month, Rawls could quite possibly prove to be one of the most valuable waiver wire picks this season as he is just the dose of “rawl power” teams need for that extra push to the finish line. Back in week 6 I said that he needed to be owned. Those that ignored the writing on the wall, shame on you. I own him in every one of my leagues. I do not own Lynch anywhere. On 30 carries Rawls had 209 yards and a touchdown. Keep the ball rawling! He also had 3 catches for another 46 yards and a score. Do I smell an endorsement deal with Rawlings? Perhaps a little Coolio music. Rawling with my homies. Or as they say in Alabama, Rawl Tide!

Spencer Ware – This guy’s name sounds like clothing that you can buy at the Spencer’s in your local mall. Just when Charcandrick West had us saying Jamaal Charles who, he pulls up lame with a bad hammy. While he is listed as day-to-day, hamstring issues have a habit of lingering, and considering the explosiveness required by the running back position, I am a little concerned. As a West owner, I am ever more concerned. When West left the game on Sunday, Ware stepped in. How’d he do? He ran for 96 yards on 11 carries and 2 touchdowns. Pretty good, huh? Sure, except when you consider that the Chargers defense was allowing 115 yards per game to opposing running backs, it seems a bit par for the course. We have very little NFL data to go on here. If you own West, I’d try and pick him up.

J.J. Nelson – How many good wide receivers do the Cardinals have? Do they grow on trees in Arizona? It almost seems unfair. This week J.J. Nelson put his name on that list catching 4 of 6 targets for 142 yards and a touchdown. The week before he was 3 of 4 for 70. He looked good on Sunday night. But even so, I don’t know that can be trusted to produce on a weekly basis given the quality of receivers in Arizona ahead of him.

Tyler Lockett – From one rookie to the next. Not to be confused with teammate Ricardo Lockette, Tyler posted 4 catches for 48 yards and 2 touchdowns against the 49ers. He had one other reasonable fantasy game back in week 7. His opponent that week? The Niners! I think I’m going to have take a pass on this one.

Kyle Rudolph – Rudolph the purple nosed Viking had a very shiny 47-yard touchdown. And if you ever saw it. You would even say it glows. It was actually a pretty nice pass from Bridgewater. After the first two weeks of the season, I was convinced that this was the year that Rudolph was going to break out. But once week 3 kicked in, Rudolph basically disappeared. Last week, however, he caught 6 of 8 targets for 106 yards and a score. I view Rudolph as a fringe starter. More of a bye week fill-in with big play potential. Unfortunately bye weeks are complete, rendering Rudolph incapable of guiding your sled tonight.

The touch on this Teddy Bridgewater 47-yard TD to Kyle Rudolph is just, wow. #GBvsMIN https://t.co/OUXWZyMkFQ

Ahmad Bradshaw – Guess who’s back! Bradshaw’s back. Bradshaw’s back. Bradshaw’s back. In my opinion Ahmad should have been owned already. He’s Gore’s clear handcuff and now looks to perhaps be a bit more than a handcuff. In PPR leagues, he close to a must own. Last week he had 4 catches for 20 yards and 2 touchdowns. Remember, before getting hurt last season he had 38 receptions with 6 touchdowns in 10 games. This year he has 3 in 5. The stats say he’s in line for 3 more before the season ends. That is, of course, unless he gets hurt.

Jason Myers – I don’t usually write about kickers, but when your name sounds like you might be the offspring of two famous big screen horror villains, I take notice…