In 1989, James Dalton gave us three simple rules. One, never underestimate your opponent. Expect the unexpected. Two, take it outside. Never start anything inside the bar unless it’s absolutely necessary. And three, be nice. I bet most of you had no idea that Dalton’s first name was actually James. And for those of you that have no idea who Dalton is, shame on you! Close your browser, get yourself a six pack of brewskis and a bottle of Jack and watch Road House. Dalton, portrayed by the late Patrick Swayze, was one of the toughest, ass kicking dudes in movie history. Recruited by the owner of The Double Deuce, a rowdy dive bar in Missouri, Dalton moves from NYC to take over security and help clean up the violence that is destroying the bar. Dalton is a professional “cooler”, or bouncer for those of you less informed readers. Despite being able to handout a beatdown like it’s his job (which it is), Dalton doesn’t actually like violence. He has a degree in philosophy and practices thai chi. This, however, does not keep him from literally ripping Jimmy’s throat out with his bare hands. Bottom line, Road House is one bad ass film. From Jasper, Missouri we travel nearly 650 miles east to Cincinnati. From one Dalton to another. My lineup of waiver wire fodder is led at quarterback by The Red Rifle, aka Andy Dalton. No relation to James.

This lineup combined for 167.96 points and would have beaten any lineup you might have faced last week. Just as an example, in our Razzball Writers League the average points scored by a team was 117 points. That’s 50 points less than my star studded, Dalton-led, lineup above. I scored 131.24 points getting the best of Tehol, who put up 126.22 points. It seems starting Benjamin Cunningham wasn’t such a bad play.

Let’s take a closer look at this week’s unexpected heroes. For the record, except for Jenkins, not one player is owned in more than 50% of Yahoo! leagues (at the time this was written).

Andy Dalton – It would have made my title even cooler if Dalton had scored 22 points this week. Instead he put up just under 19 by throwing for 269 yards and 2 touchdowns. Before you jump to any conclusions let me state that I am not endorsing Andy Dalton. He belongs on the waiver wire. Given the right matchup, he could be a serviceable bye week fill-in. I selected him this week mostly because his last name was Dalton and it allowed me to seamlessly do a post on Road House. However, for a player owned in just 26% of leagues, he did have a nice week. I probably should have selected Alex Smith who scored 23.22 points and is owned in just 20% of leagues. If Swayze’s character’s name had been Smith, I would have.

Bishop Sankey – I’m trying to figure out how Sankey is owned in only 49 percent of leagues. He’s a starting RB, and his primary preseason competition, David Cobb, is on IR and will be out for at least half the season. Sankey rushed for 74 yards on just 12 carries (6.1 yards per carry), while scoring a rushing touchdown. He also caught 2 passes for 12 yards, including his second touchdown of the game. One if by land, two if by air. Bishop takes knight. He should be owned!

Danny Woodhead – Pinocchio had a wood head. Was Danny carved by Geppetto too? While Woodhead was only able to rush for 42 yards on his 12 carries, he was able to find the end zone twice during those 12 carries. He added 4 receptions for another 20 yards on 7 targets, scoring just over 20 points. Woodhead has been, and still is, a very good PPR play. Melvin Gordon put up very similar numbers only he scored 0 touchdowns. If I were in your league and Woodhead was on the wire, he wouldn’t be after tomorrow. Then again, if I were in your league he wouldn’t have been on the wire in the first place.

James Jones – Jones makes this list because he managed to catch 2 touchdown passes. While that’s nothing to shake a stick at, without those two touchdowns, he would have only scored 7.1 points. Aaron Rodgers and the Packers are going to score a lot of points, and now we know that Jones is in the mix. I wouldn’t mind having Jones on my bench, but I’m not dropping Stevie Johnson or Roddy White to make room.

Travis Benjamin – Is Travis doing his best Kelvin impersonation? Perhaps, but even with 3 receptions on 3 targets for 89 yards and a touchdown, I’d still rather have a healthy Kelvin. Considering most of his production came on a 54-yard touchdown pass from Johnny Manziel, I’m not intrigued by his performance. If he’s on the wire in your league, and I know he is since his ownership is 0%, leave him there.

Percy Harvin – Harvin had 5 receptions for 79 yards and a touchdown. However, that touchdown was a 51-yard bomb from Tyrod Taylor. I know, we’ve all seen it. It was pretty, but without that catch, Harvin’s stats are pedestrian. I’ll put him in my watch list, but that’s as far as I’m willing to go.

Tennessee Titans – The Titans DST had a nice weekend. The only points they allowed were Austin Seferian-Jenkin’s two touchdowns. Two interceptions, including a pick-6, helped the Tennessee DST put up 15 points. I’m a defensive streamer, so you’re not really going to hear me recommend picking up a defense that just had a good week as I’m all about the next matchup. However, the Titans do get the Browns next week…

Zach Hocker – Quite honestly I only chose this dude because his last name was Hocker. I wonder if he spits a lot? Does he like to sell all of his sh*t?

Just to compare. Going into last week, would you rather have had the above lineup or the following lineup. I think we both know which one you are going to say. And for the record, even though this lineup only scored 86.54 points, the correct answer is the this lineup because I’m willing to bet that it will outscore my motley crew of players the rest of the season.

In related news, a Road House remake is in the works with Ronda Rousey set to play the role of Dalton. I don’t care how tough she is, I hate this with a passion. Even if she tried to break Turtle’s arm because he wasn’t trying to screw her, I just don’t like it. What’s her next role? Maximus in a remake of Gladiator? Don’t do it Ronda…

“Give me the biggest guy in the world, you smash his knee and he’ll drop like stone…” -Dalton 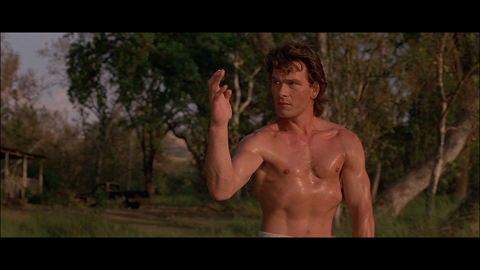