Last week, I had the ALCS on the television as I was researching some fantasy fantasy football on my MacBook Pro, and something funny happened. My wife, who’s more of a Total Divas and House Hunters kind of viewer, looked up at the game and said “is that Philip Seymour Hoffman?” Without turning my head I knew exactly who she was talking about, and immediately starting laughing. While she knows that the inventor of the shart is no longer with us, I have to admit, the resemblance is a bit uncanny. And in case you haven’t figured it out, the Philip Seymour Hoffman impersonator I am referring to is none other than Buck Showalter… 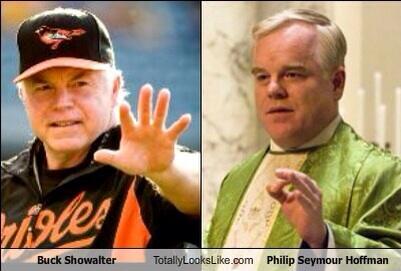 Here is a list of lesser owned players impersonating starters that would have won just about any head-to-head matchup in Yahoo! half point PPR leagues by combining for 148.74 points.

But should you be rostering any of these guys or are they all just fakes?

Denard Robinson carried 22 times for 127 yards and a touchdown. This was the first time all season that a Jaguars running back put together a legitimate performance and as a result Jacksonville won their first game of the season. Before going down with an injury Toby Gerhart was just plain awful. Storm Johnson was supposed to step in and take Gerhart’s place, but in the last 2 weeks he has averaged just 2.3125 yards per carry. While he did manage to find the end zone in both of those weeks, Robinson has likely weathered “the storm” and emerged as the starter. I’d still like to see how things shake out, but I have no doubt that Denard will be scooped up in many leagues this week. With Gerhart still out, Robinson is definitely worth taking a flier on if you are in need at running back.

While Stepfan Taylor scored twice last Sunday, I wouldn’t rush out to pick him up. Unless of course you own Andre Ellington who is clearly the guy to own in Arizona.

But if you are need of some help at running back, I suggest you order the special enTRE of the week. Tre Mason is serving up an 18 carry, 85-yard dish with a side order of a touchdown. Sounds delicious. Confidence in Zac Stacy seems to have disappeared leaving the job to Mason. Stacy had a grand total of 0 carries last week. However, I wouldn’t count out Benjamin Cunningham quite yet who has now managed to score a touchdown in 3 consecutive games.

I have been one of Andrew Hawkins biggest fans all season in PPR formats. If you can look past the goose egg he put up in week 6, Hawkins has been great. Ignoring week 6, he has averaged 5.8 receptions and 76.4 yards per game. And while he has yet to catch a touchdown pass he has been putting up solid numbers in Cleveland. If he’s out there and you are in a PPR league, I suggest you see if you can find a spot for him on your roster if you are in need at wide receiver.

Stevie Johnson had a nice game Sunday night, but unless you are in a really deep league, I don’t think he brings much value to the table.

Who needs studs? Not me!!! I’ll be back next week with another list of lookalikes that will look a lot like a losing team.