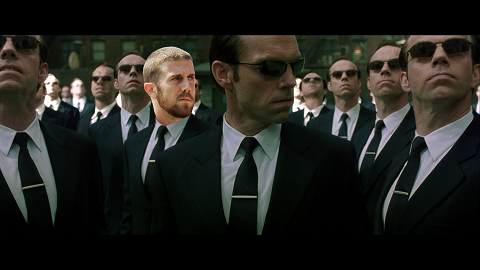 Mr. Anderson. Welcome back. We missed you. This week I tried to make things a bit more difficult by limiting myself to just the Sunday early games from which to choose. The unsurprisingly reality was that it was still quite easy to cobble together a lineup that would beat just about any team it was matched up against. Next week perhaps I will try using only players from the late games. This week’s crew combined for 180.1 points and includes one player that will undoubtedly be the top waiver wire pickup this week.

Alex Smith – With 139 fantasy points, Smith is currently in the top ten among quarterbacks, ahead of names such as Russell Wilson, Matt Ryan and Joe Flacco. Even though he only threw for 145 yards, he managed 2 touchdowns and a 97.9 QBR. He even ran for 78 yards. On the season he is averaging 245 yards passing per game. I know he isn’t sexy, but is he better than your current QB? If so, you should consider making Agent Smith your guy.

DeAngelo Williams – Ding. Ding. That’s Le’Veon ringing the bell on his season. For him, schools out for summer. For Steve Smith it might be out forever. For the Bell owners that did not handcuff him with DeAngelo Williams, you have only yourself to blame. Unless you have the number one waiver claim, you stand no chance at him. In the first two games of the season while Le’Veon was serving his suspension Williams rushed for 204 yards and scored 3 touchdowns. After replacing Bell following his injury last week, he rushed for 71 yards on 9 attempts. Williams is a must own. The only thing I’m not sure of is whether he looks more like Venus or Serena.

Taiwan Jones – Where did this guy come from. He was made in Taiwan. Ha! You get it. If you are in the 1% that own Jones and are not in a 20-team league with large rosters, please invite me to join your league next season. He had a 59-yard touchdown reception and that is the only reason he made this list. Like most of the stuff that comes from Taiwan, he’s junk.

Tavon Austin – Tavon’s week 4 performance earned him a spotlight in week 5’s Stats Machine post. In that post I said I’d pass on Austin. The following week he had 2 receptions for 6 yards. While one of those catches was a touchdown, that’s hardly a good day. The game after that he had 4 catches for 43 yards. Another dud. This past week he had another 4 catches, but for this time for 98 yards and a touchdown. He also, somehow, managed a rushing touchdown. Much to the chagrin of Gurley owners. I still have no interest in Tavon. On the season he is averaging 5.4 targets, 3.4 receptions and 40.7 yards per game. If those stats excite you it clearly doesn’t take much.

Malcom Floyd – Malcom in the middle of San Diego rewarded the few owners that started him with 92 yards and 2 touchdowns. If you were one of those owners, I’m not sure if I should congratulate you or laugh at you. Coming into last week Floyd was averaging 4.85 targets, 2.42 targets and 45.28 yards per game. He only had one touchdown in those first seven games. Starting him would have been ill advised. Moving forward I’d say the same.

Benjamin Watson – In the last three weeks Watson has been a very productive tight end. During that three game span he has averaged 7 receptions for 111 yards, scoring a touchdown in two of those games. He has the 6th most fantasy points amongst tight ends and currently has more points than Jimmy Graham, the player he replaced. I’m still not sold on Watson. Last week’s Saints game was such an offensive affair that I think even I could have put up a decent amount of points had I been in the game. I’m happy to say that I did pick him last week as one of my starts of the week, but moving forward I can’t make the same recommendation.

Jacob Tamme – Tamme has been hit or miss this season. And by that I mean he has had two good games and five not so good games. This past week he caught 10 of 12 targets for 103 yards and a touchdown. Great game, belongs on the waiver wire.

There you have it. Even a team constructed of only players found on the waiver wire that played in Sunday’s early games is strong enough to rival nearly any team in its path. If only C.J. Anderson could have made this list! Mr. Anderson…