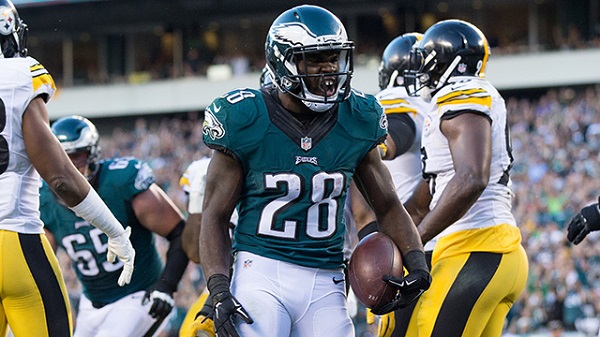 Welcome back, my lovelies, to another week of lovin’ from yours truly. How did you fare this week? Not too good from what I hear. Did you lose more valuable players to blown out ACL’s or other bodily injuries? Are you feeling like you are getting the run-around with this whole Ezekiel Elliot thing where one minute he’s playing and another he may not? I know. There is nothing worse that wanting to have a little fun and someone acting like an ex who won’t let go, and keeps hitting you up. Well, fear not. It seems that Elliot may be looking at his suspension soon, which means the door is open for some other talent to make its way into your life and satisfy all of your needs. Me you ask? I did pretty well this week. Of the leagues I am in that I actually pay attention to, I went undefeated this week. I have a few leagues which mean nothing to me, so of course, I treat them like anything which can’t meet my needs or satisfy me in the way I need it to…I ignore them and hope they will go away. So, with that in mind, let’s proceed like we are trying to get in the pants of some really hot young talent and get right down to it. Ladies and gentlemen, convicts and perverts, welcome to Hit it or Quit it, Week 10.

Robert Woods, WR, Los Angeles Rams – In Week 9, Woods caught 4-of-5 targets for 70 yards and two touchdowns. Granted, these have been the only two touchdowns of the season, but despite that, Woods has managed a healthy 50 receiving yards per game so far this season. It is worth keeping in mind that he will be a week to week WR#/Flex option, but you could do a lot worse. He also has a relatively favorable matchup in Week 10 when the Rams play host to the Texans. Look, we are getting late in the season, and let’s be honest here, you are one more injury away from having to draft someone from the field crew or concessions. Woods can give you some decent action, albeit not “blow your socks off with the most powerful orgasm of your life” action, but action nonetheless. At just 34% owned in most leagues, don’t be shy to grab him if you need a WR. Do it, you dirty little bird. Hit it.

Corey Clement, RB, Philadelphia Eagles – So, prior to Week 9, many a fantasy writer did not expect much from Clement due to the fact that Philly had Denver and the fact that Clement had yet to put up more than 30 yards in all but one game so far this season. Then they went as so far as to basically label him Fantasy Herpes, and encouraged everyone to stay away. And stay away everyone did…and they all missed out on 25.00 juicy fantasy points as Clement rushed 12 times for 51 yards and a touchdown. Oh, I forgot to mention that he also caught his lone target for a touchdown. He led the Eagles backfield in touches and was definitely Philly’s bae in the red zone. Picking up Clement will insure you someone with exceptional pass protection skills. Not sold? Worried about Jay Ajayi’s addition and how this will cut into Clement’s work? Don’t. There is no reason to suspect that Clement won’t maintain his weekly role following the Eagles’ Week 10 bye. At just 1% owned in most leagues, pick him up for use in Week 11 before everyone else does. Stop at the pharmacy for your supply of Valtrex then go on and Hit it.

Marqise Lee, WR, Jacksonville Jaguars – Marqise Lee has to be one of my most favorite pick-ups in most of my leagues. He was under-rated and overlooked and so far this season, he has kept me more satisfied that most men I have had the displeasure of experiencing. In Week 9, Lee caught 8-of-12 targets for 75 yards and a touchdown, and with Leonard Fournette listed as inactive, was front and center. If you did not know that he was dealing with a knee injury, you would have no idea watching him play. Currently, he has at least 70 yards in three consecutive games and is looking at facing the Chargers in Week 10. At just 37% owned in most leagues, Lee definitely can give you that hard-pumping action you have been dying for. Okay, well, maybe some of you aren’t looking for that type of thing, but I am. Take it from me, Lee is reliable and has yet to not satisfy me. Wrap it up and Hit it.

Deshaun Watson, QB, Houston Texans – Okay, I know that this drop is pretty obvious for most, but I felt compelled to add him to this article because some idiotic fools still are holding onto him, wasting roster space. 46% of fools in most leagues to be exact. Either people aren’t paying attention to what is going on, they don’t care, or they are in denial, but no matter the reason, Watson can kiss his 2017 season goodbye. What is concerning about his ACL injury (aside from it being an ACL injury) is that it is the opposite knee from a previous ACL injury in college. As someone who has torn a knee playing sports in the past, I can tell you it never really heals right and you will always know. So, when Watson comes back, you will be looking at a QB in 2018 who is playing on two bad wheels. This is heartbreaking because Watson had been pretty solid as a QB1 prior to this. The good news is (like I mentioned before) he will be back at the start of the 2018 season, so there is that. All sexual innuendo aside, get well soon, Deshaun (and hit me up if you need some private physical therapy). Quit it.

Wendell Smallwood, RB, Philadelphia Eagles – Wow, it seems like I have Philly on the brain. Probably because that city is going to enjoy having me inside of it in about a week, for about a week (be ready, Philly, I promise to be gentle). It seems like only a few weeks ago, most of the articles I was reading were doing nothing but singing the praises of Smallwood and the benefits of partaking in such. Well, I have always been a girl of large appetites so I never fully bought into this one, and it is probably good that I stuck with my gut. Smallwood was all but a non-factor in Week 9, catching 1-of-2 targets for an impotent nine yards. With Corey Clement and LeGarrette Blount doing all the hard pumping, Smallwood became just that. Right now, he is just not a reliable fantasy option because he has two giant pieces of meat ahead of him, but that does not mean you can’t stash him on a bench somewhere, you know, in case of a little Black Swan action. Don’t know what I am talking about? Read a book you savages. Anyway, for now, there is more talent out there who will be more reliable for you, so for now, go for the bigger package. Quit it.

Well, there you have it my favorite degenerates. Week 10’s Hit it or Quit it is in the bag. Remember to follow me on Twitter @Soxfan012 for all of my musings and general awesomeness. Until next week, remember to always…ALWAYS wear a rubber! Kisses!