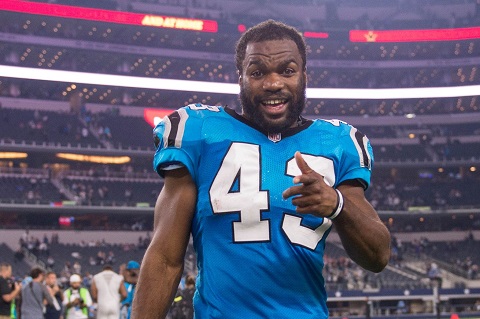 Welcome back, my Horde, to another edition of your weekly vice, Hit it or quit it.  Well, it looks like I managed to make it to Week 2 before my Black Widow Curse cost me some of my players.  Not to mention that I got my ass beat so hard in all of my leagues this week that even Ray Rice thought that the pounding I took was excessive.  It was definitely a rough one, but thankfully, I am someone who likes it rough.  And knowing all of you (the way I think I do) you like it rough too.  I hate to say it, but I really do love it when I end the season with pretty much a whole new roster than what I originally drafted and actually come out on top.  Now is our time to shine and really work over the rest of the people in our leagues.  So, without further foreplay, let’s get down to business and see what we can do with each other in this week’s edition of Hit it or Quit it, Week 3.

Fozzy Whittaker, RB, Carolina Panthers – Okay, I have to admit, “Fozzy Whittaker” sounds like some strange sexual practice (hence my title this week) and to be honest, if I did not know what I know about football, I would think that it was.  Go on, try me out.  Go and ask your girlfriend (or wife) if you can give her a Fozzy Whittaker tonight and see what she says.  I’ll wait…See!  I was right, wasn’t I?  I may have to get this one into the Urban Dictionary, but I have to come up with what it is first.  In the meantime, he will have to remain a Running Back for Carolina.  With Jonathan Stewart succumbing to my Black Widow Curse in Week 2, Fozzy Whittaker had to step up in the first quarter, and step up he did.  Overall, Whittaker finished the game with 16 carries for 100 yards and another three catches for an additional 31 yards in Carolina’s Week 2 win over San Fran.  Sure, he left for a little bit there with a suspected concussion, but really only missed one drive.  For now, it is looking like Stewart will miss some time with the hamstring injury, which leaves a lot of room open for Whittaker to step in and meet your needs.  Don’t be put off with Cameron Artis-Payne either.  He has been inactive since the start of the season and even if he does activate, he is still looking at time behind Whittaker.  I know you are all trying to be more adventurous, so what better way than to participate in a little Fozzy Whittaker?  Go on.  Hit it.

Quincy Enunwa, WR, New York Jets – Those of you who have been reading my Hit it or Quit it for the past few years know a lot about me.  One thing that I have made known is that I like a man who is versatile and can be used in as many ways as possible.  Quincy Enunwa seems to be emerging as one of those kinds of men.  Not convinced yet?  What if I told you the third year player was targeted as many times as Brandon Marshall in Week 1?  No?  What if I told you that the Jets seem to be using him in any way they can?  Bunching him up as a slot receiver and using his body to shield the ball from defenders, lining up in the slot formation (oooh, that sounds super dirty) thereby utilizing his physicality as a runner to pick up downs, and blocking like a Tight End.  Yes ladies and gentlemen, Quincy has it all.  He also managed to rope in 6 of 6 targets for 92 yards in Week 2.  Sure, I know some of you may be a little hesitant because he appeared to have some kind of rib issue that seemed to slow him down somewhat after the half, but there is no reason at this point to not consider him a WR4 for the Jets Week 3 matchup against the Kansas City Chiefs.  At just 10% owned in most leagues, let’s face it, you could do a lot worse.  You need him.  You want him.  Don’t hesitate.  Hit it.

Adrian Peterson, RB, Minnesota Vikings – Well, the AP bad luck has hit me again.  The last time I owned AP, I lost him at the start of the season because he decided to whip his kid with a switch.  Now, it seems the Fantasy Gods have destined for me to not get anything from AP as it seems that his injury in Week 2 is a torn meniscus and his status is up in the air.  Week 1 and Week 2 have not been kind either, since Peterson only managed to provide me with 3.10 and 3.60 points respectively.  Not nearly enough to satisfy a woman of my wants and desires.  Now this.  Okay, sure, AP has a history of returning from injury sooner than other players would, but come on, how realistic is this?  Owners like me may be looking for someone else to fill our needs in the meantime because he is looking at, at least, a few weeks missing.  And to be honest, unless he comes back and bangs harder than a convict on a conjugal visit, I am not impressed.  I am not saying drop him completely, come on, give me some credit here.  I am just saying re-evaluate your options.  The Vikings have been struggling to run the ball so far this season before Peterson got hurt, so it is likely that with this, they may become more of a pass-heavy team in the weeks to come.  For now, AP needs to be parked to the side until the full extent of his injury is out in the open.  In the meantime, get your freaky on with one of the other juicy suggestions I have for you.  Sorry, AP, time to rest up on my bench while mama gets her satisfaction elsewhere.  For now, it’s time to Quit it.

Jerick McKinnon and Matt Asiata, RB, Minnesota Vikings – So, now that AP is out of the way and mending on your bench, who do you wanna get your freak on with?  I am looking at McKinnon.  I know, I know, I can’t believe I’m saying it either.  I owned McKinnon a few years ago and let’s just say it was nothing to write home about.  Sure, it was a slot I needed filled at the time, but I don’t have to say that I am proud of it.  Now here we are, back at it again.  With Adrian Peterson looking at, at least a few weeks of R and R, the Vikings will be looking at McKinnon and Matt Asiata to step up and perform where Peterson fell flaccid.  It is projected that McKinnon and Asiata will double-team and form a 65-35 split, and although there is some talk with Asiata will be the goal-line man and punching it home, McKinnon is doing all the work and has more talent.  When I lost Peterson in 2014, Asiata ended up being a Fantasy dynamo for me and that could likely happen again, depending on how much time Peterson misses.  In the meantime, if you are looking to have those needs met and would like a little double team action, McKinnon will do all the foreplay while Asiata will give you what you want on third downs and goal line work.  Go ahead both are worthy of your love.  Hit it.

Kirk Cousins, QB, Washington – Unlike Zach Robinson, I can’t bring myself to say the name of this team, just like I can’t bring myself to tell you that Kirk Cousins is a QB worthy of your time and devotion.  Bottom line is, Cousins is not playing well and despite many weapons to his advantage, he has only managed to muster 5 of 7 passes for 34 yards, one touchdown, and two interceptions in the red zone this season.  Look, I am here to make sure that you are all satisfied and taken care of, and I can’t stand to see any of you suffer with someone who doesn’t give you what you need.  You can do so much better than a QB who’s own players have reportedly been complaining about because of his “lack of decisiveness, erratic play, and confusion.”  You need a warm and tender lover who will satisfy your every fantasy.  Cousins is not it.  Sure, they won the NFC East last season, but the Cousins of last season is not the one we are seeing now.  There has even been some talk that Colt McCoy would play better than Cousins.  Come on, my Lovelies.  Please, I hate to see you suffer.  Just don’t.  Find someone better.  Quit it.

Well, there you have it, my Horde.  Short, sweet, and to the point.  It was overall a quiet week on the waiver wire, and hopefully it stays that way.  For now, remember that I am here for you and it is my goal to make sure that you are getting as much satisfaction as you possibly can.  Love me, hate me, whatever.  I’m the one with the article.  As always, follow me on Twitter @Soxfan012 for all my shenanigans, daily musings, and overall awesomeness.  Until next week, use a rubber!