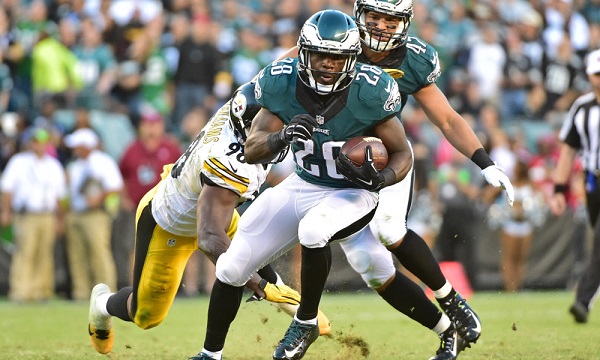 Well hello my lovelies!  I am so sorry I missed you all last week, but hopefully Matt Bowe took good care of you in my absence.  I know that no one can love you as much as I do, but sometimes a little variety is needed.  I know I left you in capable hands.  With that being said, how did you all fare this past week?  Me?  Well, not so well.  It seems that it took all of three weeks into the season before my Black Widow Curse decided to decimate half of one of my rosters.  It’s okay, I can adapt.  It would be nice to have a man who can actually finish for once though (in more ways than one) to the actual end without having to tap out prematurely.  But, c’est la vie.  I know you are all eager to see what I come back with this week because I know you are all hungry for what I have to offer you, and it is understandable.  I am quite addictive, I know.  It’s a curse in and of itself sometimes, but alas, what’s a girl to do?  Are you ready?  Are your hammies all stretched out and those little blue pills have been downed?  If so, let’s get this party started, shall we?  Ladies and gentlemen, convicts and parolees, I give you, Week 4’s edition of Hit It or Quit It!

Okay, look, I don’t feel good about this one either and when someone talks to me about Philadelphia, well let’s just say an unholy chill runs up my spine.  Anyway, even in the darkest recesses of the bowels of Pennsylvania there is a proverbial light at the end of the tunnel.  Enter Wendell Smallwood.  Hopefully, all of you fellow Darren Sproles owners have taken your heads out of the oven or nooses long enough to read this article, and if you are loyal Eagles Homers, then I have a possible solution for you.  Now, I am not one to enjoy or promote Smallwood (of any kind) but this one will do in a pinch.  In Week 3, Smallwood played 43-of-76 snaps, which happened to be 21 more than LeGarrette Blount.  Smallwood also managed to have the ball in his hands for just as many carries as Blount, despite not finding the end zone as many times.  Going forward, it looks like Smallwood may be the better fantasy option.  So don’t be afraid of things that come in small packages…even wood.  Go on, Hit it.

Are you sensing a theme here?  I know, I was told that I needed to show more love to some of the dirtier towns by some of my readers and I am always one to please.  Owned in just 2% of most leagues, Alex Collins isn’t the prettiest of choices right now and may be looking at a little too much value on the wire this week, but you could do worse.  Rushing nine times for 82 yards in Baltimore’s Week 3 loss to Jacksonville.  He is currently involved in a three way with Terrance West and Buck Allen right now, but is showing promise to emerge and be given more opportunities.  His involvement in that little love triangle with West and Allen also garners him some upside but there is a limit to what he will be able to have left for you.  In the meantime, you need a Running Back…he is a Running Back.  As a filler, he should be picked up in most leagues.  Go ahead and do this one dirty.  Hit it.

I am putting this one on here for one reader in particular who happens to be a Giants fan.  I know, I feel sorry for him too, but it is what it is.  In Week 3 Shepard caught 7-of-10 targets for 133 yards and a touchdown primarily due to a new Giants offensive strategy of trying to get the ball out of Manning’s hands quickly.  Which is no easy feat because we all know how much Eli loves to handle balls…(bad um tss).  Anyhoo, Shepard  led Giants receivers in playing time and he is looking to have the eye of Manning as his first read on quick throws.  The G-Men have Tampa Bay next weekend and their defense is pretty banged up right now.  If the Giants continue this offensive strategy, expect Shepard to continue to offer up some serious fantasy meat.  I can see all of your pants starting to tighten in the crotch area as you read this.  Go on you saucy little monkey, Hit it.

A broken arm AND a torn ACL?  Yep, my Black Widow Curse came out in full force on this one.  As a Sproles owner, it was inevitable.  When she wants to feast, she sometimes gorges herself and this time was no exception.  I can’t even go on with this one anymore.  Time to stick my head back in the oven right after I Quit it.

Three weeks into the season and Hunter Henry is looking at double goose eggs on 2/3 of those weeks.  What most people don’t understand is how is was not targeted at all in Week 1, had a pretty busy week in Week 2, then was ignored again in Week 3.  It kind of reminds me of what I did to that one guy who I’d call periodically when I wanted a little…ah, never mind, you get the idea; moving on.  In 2016 Henry was tied for league-leads among Tight Ends with eight touchdowns, but hasn’t been able to get in the end zone at all this season so far.  It is unclear what the issue is, but this one week on and one week off bulls**t is for the birds.  There is a lot of other solid Tight End action out there and you all deserve better than a booty call every other week.  Feel free to Quit it.

What it is like to be considered a fantasy dud?  Ask Kerwynn Williams.  See what I did there?  I knew you would.  All that build up about what a fantasy stud Williams was going to be was all but squashed in Week 3.  Perhaps it was the hype and he got performance anxiety and couldn’t, ah, perform, but Williams was so ineffective that the Cards ended up feeding the backfield to Chris Johnson.  Williams also didn’t see a single target in the passing game which makes Kerwynn Williams the biggest Quit it of the week.

Well, there you have it my lovelies, this week’s edition of Hit it or Quit it.  As always, love me, hate me, whatever, I’m the one with the article.  Be sure to follow my fine ass on Twitter @Soxfan012 and as always sacrifices to the Black Widow Curse are appreciated and never forgotten.  Until next week…