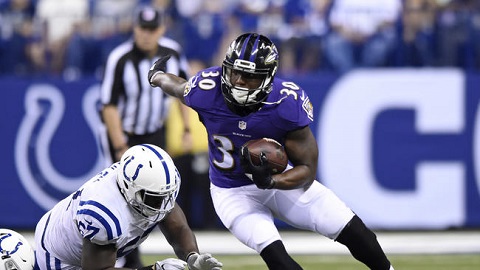 Welcome back, my Horde!  I am sorry that I once again had to leave you in the lurch last week.  I know how you so depend on your weekly interactions with me, not only for spank bank fodder, but your required human socialization as well.  It turns out that Mother Goddess was ill and being the sensational daughter that I am, she had to come before all of your perverted needs.  Needless to say, she is on the mend and has given me permission to attend to your needs now.  Ugh, it is so trying being so in demand, but I understand your addiction.  I am quite charming, after all.  So, first things first, how did you fare in Week 4?  Me? Not so good.  I was beaten so badly that Chris Brown Tweeted that he had nothing to do with it and was nowhere around me at the time.  I swear.  Look it up.  I am chalking this week’s shellacking up to being a good daughter and not prioritizing Fantasy Football over Mother Goddess’s health and well-being.  So, for those of you who went up against me this past week, enjoy the freebee, because I don’t come cheap.  I also managed to lose some of my muscle on my teams to my Black Widow Curse, so it is good to know that at least that is consistent.  I am sure that you all got nailed too (and not in a good way).  So, without further ado, let’s see what I can do to assist you in repairing your damaged rosters with this week’s edition of Hit it or quit it, Week 5.

Kenneth Dixon, RB, Baltimore Ravens – I know that those of you who have followed my work for years now know how I feel about having a little piece on the side.  I am guessing (since you perch like a gargoyle on my every word) have probably stashed something in your rosters when you drafted.  No?  Well, we can’t all be perfect.  And it seems that one stash that may have gone under the radar was Kenneth Dixon.  Out with a knee injury since the start of the season, it looks like he may be coming back soon.  And, since it looks like only about 25% of you went for the side piece, that means quite a few of you still aren’t on board with a little stash action now and again.  I know, I know, that whole “committee” thing in Baltimore has your taint in a pinch.  And I get that Terrence West seems to be the HBIC in Dirty Birdville right now, but its time to give that side piece a little action.  Dixon will more than likely be “eased” back into action, according to ESPN Ravens Reporter Jamison Henley, and will likely remain limited in Week 5, but there is a good chance he will rise to the top of the depth chart as the season progresses.  He may continue to be in a threesome with Justin Forsett and Terence West, but out of the three, its speculated that he may become the passing-down bae to Terrence West.  Some feel that he is not worth using outside of deeper leagues, but he really is a nice bench stash for now and a decent add in all formats.  So, throw caution to the wind, get the pinch out of your taint, unclench your b-holes, and Hit it.

CJ Spiller, RB, Seattle Seahawks – I can’t believe I am doing this.  This is about the most shameful thing I have ever done, and that is really saying a lot!  But, unfortunately, we have to sometimes do things we aren’t proud of, like calling CJ Spiller a Hit it.  Ugh, just the thought of it makes me feel dirty, but I feel compelled to do so.  Oh!  What hard times have befallen me!  Fickle fate of fantasy football!  Why do you mock me?!  The biggest turd of my roster the season before last (and someone I couldn’t quit fast enough) has now made it to the hit it.  I am not happy with it and I am not 100% on board with this, but I would be remiss if I did not at least give you enough to make your own decisions.  I must caution you and list a disclaimer here:  In no way do I endorse Spiller in 12-team leagues…at least, not yet.  Signed with the Seahawks mid-week last week, it was a surprise to see him in action over the weekend.  But he did see more action that C.J. Prosise.  That isn’t saying much though.  Spiller didn’t do a whole Hell of a lot.  He rushed 2 times for 12 yards and caught 2-of-3 targets for five yards and one touchdown.  You know what?  Come to think of it, that sounds about right for Spiller.  You also know what?  I am changing my mind and telling you to stay as far away from this as possible.  Don’t let some online hype about him sway you.  Do what I am doing, listening to my gut.  I think this is a Hit it or Quit it first for me.  What started out as a Hit it has now become a Quit it.  I’m bailing on this one because my women’s intuition is too strong.  It’s like getting a call from an ex.  You know how this one is going to play out.  I’m a woman.  I’m allowed to change my mind…Quit it.

Wendell Smallwood, RB, Philadelphia Eagles – Okay, now that we have that nasty C.J. Spiller nonsense out of the way, and I got a scorching hot shower to rid me of the filth that I felt for even considering him as a hit it, we can get on with our business.  Enter Wendell Smallwood.  This article this week seems to be RB heavy…probably because it seems my Black Widow Curse has taken a fancy to them this season.  Oh, well…onward…  Are you a disgruntled Ryan Mathews owner?  If so, I have to question your choices since he can’t seem to stay on the field. Blame my Black Widow Curse, if you will, but in the end, you were the one who drafted him.  If you are, then you may want to take a peek at young Master Smallwood.  In Week 4 against the Steelers, Smallwood whipped out 79 yards and a touchdown.  He has shown that he has really nice awareness to stay in bounds on runs and to do this as a rookie is really some feat, apparently.  Sure, he had a bit of a touchy training camp with a pesky quad injury, but there does not seem to be any issue with it now.  There is the potential for a lot of opportunities for Smallwood, even if Mathews comes back (and we all know if he does, it won’t be for long.  Am I right?)  So, should Smallwood continue to show his prowess, skill, and performance like he has, expect those opportunities to skyrocket.  Don’t let the name fool you.  He’s all man.  Be one too.  Hit it.

Ryan Tannehill, QB, Miami Dolphins – Okay, not going to lie, this one pains me a little bit.  As a former Aggie myself, I am a bit of a homer when it comes to my Alma Mater.  But there comes a point where loyalty is overcome by common sense and that is where I am with this right now.  It seems Tanny forgot how to football and could be looking at a benching if his performance doesn’t enhance.  He is also disadvantaged by a horrible offensive line and he may as well take his blankie and snuggle bear with him when he’s in the pocket because it seems like he becomes unaware of what is happening around him.  I have seen rookie QB’s with more pocket awareness.  He was also set up by some poor coaching choices.  Right now, Miami is a mess and not even Ace Ventura could solve this mystery.  If you must play him, he is a long-stretch QB2 at this point, but you would be better off just dropping your pants, bending over, and taking one up the pooper dry.  I’m sure that would hurt less than what Tanny would do to you.  Oh the shame!  Whoop, Aggies!  Tanny, you, not so much.  Quit it.

Spencer Ware, RB, Kansas City Chiefs – Seriously?  We are having this conversation again?  I am having Razzball flashbacks to one of my first Hit it or Quit it’s in like 2014.  SSDD (Same Spencer, Different Day).  Fumbles, shrinking touch opportunities, and the potential to lose his role to a returning Jamaal Charles.  Do I need to go on?  Okay, Charles is not exactly known for remaining healthy, I will give you that, but aside from a monster week in Week 1, what has Spencer Ware done for you, except cause you to re-evaluate all of your life choices?  Nothing, that’s what.  He is still owned at about 78% in most leagues, but I anticipate that number to drop considerably with Charles set to return.  Drop this load and make room on your roster for someone who will fulfill your needs.  You deserve it.  I’m staying consistent with this one.  I said it in 2014 and I will say it now.  Quit it.

Well, there you have it, my loyal Horde.  Another edition of Hit it or Quit it is in the books.  Remember, I am not making all-out demands here, just giving you some things to consider and look at before you make the best (or biggest) mistake of your lives.  Love me, hate me, I’m the babe with the article.  Remember to follow me on Twitter (@Soxfan012) for all of my shenanigans, musings, and general awesomeness.  The choice is yours, my lovelies.  Until next week, remember to use a rubber and never, EVER go college bar hopping with Ben Roethlisberger.  You’ll thank me later.