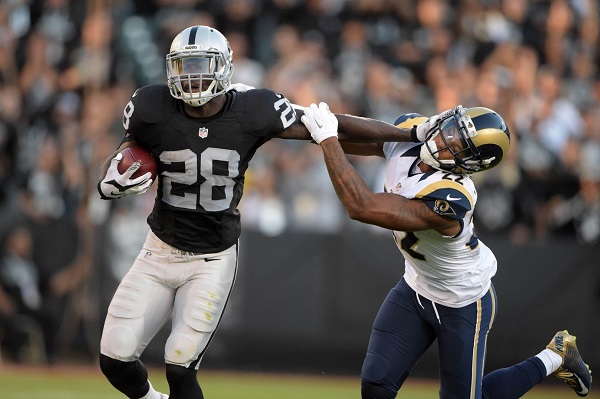 Hello my loves! Welcome back to another rendition of Hit it or Quit it. How was your week? Did you manage to avoid arrest for indecent exposure? Yes? What is wrong with you? You need to step your game up then, otherwise we can’t be lovers anymore. I had a fairly decent week until I got bent over and did raw in one of my leagues when I wasn’t notified that Michael Crabtree was out and ended up starting him. It handed me my first loss in that league and yeah, I am still salty about getting a case of the CRABtrees. Alas, such is my life. I am still sitting ontop of all of the men in that league, so the view is pretty sweet. Wait, that sounded dirty…heh, heh, heh… Now, I am sure you are all here because, like the song of the Siren, you couldn’t pull yourself away. Again, it is understandable, I am pretty awesome after all. In a week where the Black Widow Curse was pretty quiet (probably from all that man flesh she feasted on in Week 3), it is not guaranteed how long her satiety will last. So, with that, let’s get down to business and stop all this pillow talk. Ladies and gentlemen, convicts and degenerates, ask and ye shall receive. I give you, Hit it or quit it, Week 5…

Latavius Murray, RB, Minnesota – Are you worried about his ankle? Come on, has that ever stopped you before? I have seen and heard about some of the risks you all will take in your lives, and this one should be no exception. Murray feels that he is good enough to play even with his recovery time taking longer than expected. Look, I am a woman who is not a fan of long recovery time. When I expect you to go, you best be ready. It is never a good thing to keep me waiting, but I am willing to make an exception here. Right now, it is looking like Dalvin Cook may be done for the season and although Murray is not the best you can do, you could do worse (and I am sure you have). Entering the game after Cook went down (and not in a good way) Murray looked like complete sh**, but he figures to see most of the early-down and goal-line work, while Jerrick McKinnon is figured to see most of the pass-work. Are you looking for an RB3? Again, you can do a lot worse. Regardless of how ugly this pick may be, Murray is a must add on the wire this week. Suck it up, Buttercup. Put a bag over his head and Hit It.

Will Fuller, WR, Houston – Those of you who have been my loyal readers for the past 4 years know one thing: it’s that I love me a man who is good with his hands. Soft, gentle, caressing…yeah, that’s what I’m about and what gets me going. Fuller on the other hand has hands carved from marble by DaVinci himself. That being said, the boy is fast. I mean really fast and considering he had no practice time with Deshaun Watson heading into this past week, Week 4 was quite the decent showing. Catching 4-of-6 targets for 35 yards, two touchdowns, AND playing his first game following a broken collarbone suffered in training camp? Yeah, I can overlook the stone hands for now. Currently, Fuller is just owned in 32% of most leagues but should be on your WR4/flex fringe for Week 5. You know you want to feel a little “Fuller”. Do it, babes. Hit It.

Aaron Jones, RB, Green Bay – I am surprised that the press was able to make out any of the words Aaron Rodgers said about Jones, you know, with his manhood in Rodgers’ mouth and all, but hey, it is what it is. With my Black Widow Curse feasting on Ty Montgomery and Jamaal Williams, it is looking like Jones is in line to start Week 5 in Packertown. Granted, his performance in Week 4 wasn’t a memorable one, but he made due with what he had to work with. Much of the Packers Offense is hobbled right now, so that would be something to consider, but if you are willing to take a shot because you are in dire need of a Running Back, I wouldn’t kick you out of bed for picking Jones. At just 11% owned in most leagues, Jones should be a high target on the wire this week and would slide in nicely as your RB2. Pick him up, slide him in and Hit It.

Jeremy Maclin, WR, Baltimore – I think someone forgot to tell Maclin that there was a game this past weekend because he forgot to show up. It seems to be a trend for him as of late this season, and Week 5 is not looking like it is going to be the Maclin Show either. In Week 4, Joe Flacco (aka Bert) attempted 49 passes and even with all that action, Maclin was too busy doing his best Claude Raines impression. It’s anticipated that even with Oakland’s “just lay there and take it” secondary coming up in Week 5, Maclin won’t be much of a factor. Let’s just face it, Baltimore is a sh** show right now and Maclin is no more than a long shot at flex, and that’s only if you like taking one up the old pipehole…raw. Do me a favor, darlin’, you go out there and get you a receiver who is worthy of your lovin’. Maclin is not that dude. Toodles, Dumpling! Quit it.

Jeremy Hill, RB, Cincinnati – Remember a couple of years ago when people couldn’t wait to use their Hill? I do. I was one of them. But with a plethora of off the field troubles and being essentially useless as a Bengals running back, Hill has become the biggest quit it of the year thus far. Through the first four weeks of this season, he has yet to hit 30-yards from scrimmage in any game, despite being fed 7-8 touches per. Not to mention he won’t be able to offer you anything unless he can get in the end zone, but even that seems to be impossible for now. Sure, he may offer you some goal-line looks, but honestly, let’s face it, Joe Mixon is the HBIC in Cinci and is quickly blowing past Hill on the depth chart. I think the time has come. This one is over the Hill. Get it? Ok, yeah, just move on and Quit It.

Coby Fleener, TE, New Orleans – With Willie Snead and Josh Hill out, everyone thought that it was going to be a lock for Fleener. But in Week 4, he saw just four targets and has eight catches combined through four games. In Week 4, he caught one pass for 21 yards and aside from a holding penalty, you never would’ve known Fleener was even there. Hell, I am not sure even Fleener knew he was there. He was handed an opportunity, but has done absolutely nothing with it. Once Snead and Hill return, Fleener will go the way of most of my ex’s: Disappear into oblivion. Look, I know you need a tight end and I know pickin’s are slim out there right now, but come on, Boopy, go for Tyler Kroft or even Benjamin Watson. Fleener doesn’t deserve you. Do it. Quit it.

Well, there you have it my loves. Another edition of Hit it or Quit it is in the books. As always, remember, love me, hate me, whatever I am the one with the column. Continue to follow me on Twitter @Soxfan012 and be ready to slide into my DM’s! Until next week, sweet thang…