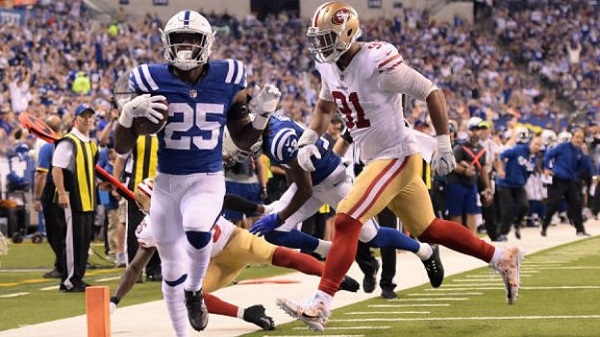 Want to nab him and hold onto him? Go on sexy britches, take a lesson from my playbook and Welcome back my lovelies, to another week of Hit it or Quit it. I honestly have to say that Week 5 has been the most carnage-inducing week thus far. The Black Widow Curse was certainly back and in full-on raging b*tch mode. Probably because she had been pretty quiet in Week 4. B*tches be trippin’ like that sometimes. But alas, here we are. I managed to make it out alive this week, but I know most of you are still laying in your kitchens with your heads in the oven. Don’t fret, my loves. I have always been here to satisfy all of your needs and this week is no exception. So, let’s cut through all the foreplay here, shall we? Bust out the lube and get ready. I present to you Week 6’s edition of Hit it or Quit it.

Marlon Mack, RB, Indianapolis – Oh, Indy. I spent a night inside you back in the day and oh what a night it was! But I digress. Let’s get back to you, my faithful horde. How is your Running Back situation? Not good? Well, I may have a solution for you. At just 9% owned in most leagues Marlon Mack may be the new meat you are craving to fill that hole of yours. Rushing nine times for 91 yards and one touchdown in Week 5, Mack may be on track for some more looks. He has certainly caught the eye of Head Coach Chuck Pagano who commented, “I think it would be wise to find ways to get him the football and get him more involved.” I know that Frank Gore’s presence and HBIC status in Indy concerns you, but the time may be on the horizon for younger, fresher talent and Lord knows, Mack certainly has more (ahem) stamina in that young tank than old Frankie-boy and is on his way to more looks as he continues to turn heads. At this point, Mack needs to be added in all formats but hold off on starting him Week 6 against Tennessee. Trust me. I know you are tempted to take him out for a test drive, but you may do what I did in Indy. Hit it.

Terrance West, RB, Baltimore – Even before going down with an injury this weekend, Terrance West was rapidly moving towards fantasy herpes. You know, many people had him but no one really wanted him? Yeah, pickings are really slim out there right now with this being a banner year for early injuries but even before this, West was being shut out by Alex Collins and Buck Allen. No one ever wants to be the third wheel and threesomes can be awkward when you don’t really bring anything to the table. West found this out the hard way. Currently looking at what’s being called an “extended absence” it seems that this threesome is over and the third wheel is removed. There is no reason to continue to hold on to West (if you are, let it go, Sugar Plum) in any formats. There is plenty of other talent out there. Do the humane thing. Quit it.

Roger Lewis, WR, New York Giants – Damn, Giants, you seriously pissed off the Black Widow Curse this week. You lose Odell Beckham, Jr. and just about every other receiver in the pack. Ok, I may be over exaggerating that a bit, but come on, you know I’m not. I’m pretty sure that things are so cursed for the Giants that even a Yinzer here in Pittsburgh who was wearing a Giants jersey over the weekend blew out his ankle walking up to the bar to get another Iron City Beer. That being said, the only healthy Giants receiver right now is Lewis. Beckham, Jr. is done for the season thanks to what looks like a broken ankle, Brandon Marshall is out at least for the next few weeks with an ankle injury, Sterling Shepard (also with an ankle injury) has an uncertain status right now…Damn, if I was Lewis, I would be walking on eggshells…not literally because I would probably slip and break my (you guessed it) ankle. If you want to stay loyal to your G-Men like I know many of you may, this is your only option right now. At just 2% owned in most leagues, consider Lewis a volume-based add for now, until things become a little clearer about his usage later in the week. If you want to do it, Hit it but watch out for those ankles!

Jerick McKinnon, RB, Minnesota – It’s official my degenerates! We officially have a good ol’ American gang bang happening in Minnesota with Dalvin Cook’s absence. Ok, so maybe not an actual gang bang. More of a committee between Latavius Murray and Jerick McKinnon. Murray will do all the heavy lifting on early downs while McKinnon is set to work with his hands on the pass and looking to change the pace of the game. Although Murray has had a bit of a tough time coming back following his ankle surgery, it is not unheard of for McKinnon to eventually end up doing much of the work (we’ve all been that person, right??) in the shirt-yardage situations. The call is up to you. McKinnon comes with some long-term benefits, while Murray looks to give you what you need in the short-term. It depends on what you want? Something to tide you over for now, or are you looking for a long-term commitment. Time is a-ticking and at 25% owned in most leagues, McKinnon should be picked up in all 12-team leagues. Make the commitment. Hit it.

Tyrell Williams, WR, Los Angeles Chargers – I know that I probably won’t be popular for this pick, but let’s be honest here, Williams has been more bust than boom so far this season and catching 1-of-2 targets for 22 yards in Week 5 against a broken and battered Giants team does little to offer any kind of hope. Maybe I am just a woman with too high of expectations when it comes to performance, but being disappointed by said performance really makes for awkward conversations afterwards. Although Williams is looking at a favorable matchup this week against a sh*tty Raiders defense, the potential appearance of Mike Williams could put a damper on Williams’ prowess. You can keep telling yourself that it is going to get better, or you can just accept that you aren’t going to get what you need or deserve and move on to bigger and better things. It’s ok, Poopie. Just Quit it.

Ben Roethlisberger, QB, Pittsburgh – Oh, man, how satisfying this last pick is. I certainly saved the best for last. Living in this city my entire life has taught me one thing: Pittsburgh sports teams are the worst teams on the planet. Not because of their inability to win, but because of the attitude and arrogance they employ. I could go on and make jokes about Roethlisberger having issues keeping his hands and his other parts to himself when there are drunken co-eds around, or I can just give you what you came here for, why Roethlisberger has become the biggest Quit it this week. Simply put, he should’ve retired at the end of last season, and had he not owed the Steelers money, he probably would have. Coming off of one of the worst weeks he has seen, old Big Ben is averaging just 6.5 yards per attempt (which is a career low) and was only able to produce two touchdowns in the last three games. Couple that with Roethlisberger commenting, “Maybe I don’t have it anymore” following his flaccid performance in Week 5, and you have the perfect storm of a QB you want to stay far, far away from. He is still 94% owned on most leagues and the only reason I can think of for this is that these people are masochists and they love having pain instilled on them week after week. He had failed to throw for multiple scores three games in a row and this week was the first time he had more than 300 yards since Week 10 of last season. Look, I know you think you are onto something here, but you aren’t. I care about you. I want to make sure you are satisfied and Darlin’, I can’t stand to see you subject yourself to this. Do it, Buttercup. Quit it.

There you have it my loves. Another week of Hit it or Quit it is in the books. As always, love me, hate me, whatever, I am the one with the article. Be sure to follow me on twitter @Soxfan012 for all of my daily musings, charming quips, and overall awesomeness. Until next week…