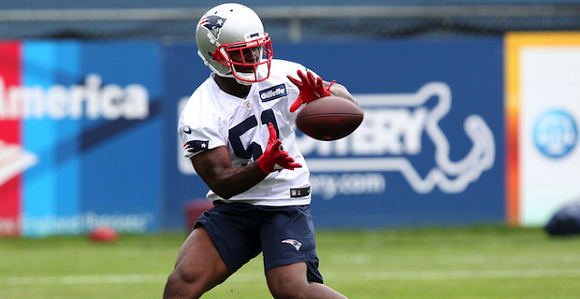 Reid here kicking off my weekly installment of Hot Take Tuesday for everyone. I’m going to, for the offseason at least, try and do a division a week and look to throw out one hot take per team. For this initial installment, I’m going to be looking at the AFC East. Hope you are ready for this heat!

New England Patriots: RB Sony Michel will end up as the top fantasy rookie RB by the end of the season.

I can only imagine how angry the Giants fans are after reading that. Well it has more to do with how I think the Patriots will play this season out that how Saquon Quadzilla Barkley will perform this year. But back to Michel, since this is his moment. His competition for snaps is considerably less worrisome than some of the other rookie RB’s. What I believe will separate Michel from the rest of the rookie class is the simple fact that they play in easily the worst division in football. I expect the Patriots to be up by a ton in almost every game this year, and there’s no Dion Lewis to siphon carries away. A second reason why I’m not scared about the other RB’s in New England is because using the 31st overall pick on a running back you sparingly use doesn’t feel like something even Bill would do.

NY Jets: No NY Jet RB or WR will be top-50 at their position.

Not much of a hot take here. I have no faith in the Jets O-line to hold up in pass protection. The RB’s are… less than inspiring, especially if Crowell gets a majority of the work. I think Powell and McGuire/Rawls siphon off enough carries to keep Crowell outside of the top-50 this year. As for the WR corp… uhh… Not really sure I need to go to far into this one. The QB talent isn’t strong enough this year (love Darnold next year) to really let this cast of characters pretending to be an NFL WR group.

This is a pure hunch. I thought he was the best TE coming out of the draft and I believe Miami will rely on him heavily. This Dolphins team is the ultimate wild card for projections. Tannehill changes the entire dynamic for the skill position players on the team. Gesicki will slide right in as the top tight end on the team and I think they’ll target him on play action in the red zone quite a bit.

Buffalo Bills: LeSean McCoy is not a top-20 RB this year.

Woah. I know. I’m supposed to be the big Bills homer here, but hear me out. The WR corp is atrocious. The O-line is suspect after Eric Wood and Richie Incognito are no longer members of the team. And we have no idea who will end up winning the QB battle (ps. I think it’s Nathan Peterman). With all that being said, McCoy saw his YPC drop substantially last year. Another factor is that Brian Daboll is the new OC in Buffalo and we have no real understanding of how he plans on working the offense. I think in PPR Leagues, McCoy will hover around RB-20 based on volume alone. Important to remember that they did bring in Chris Ivory at the RB spot, which could be another red zone vulture for sure.

That’s it for some hot takes this week. Tune in next week for me NFC East hot takes.