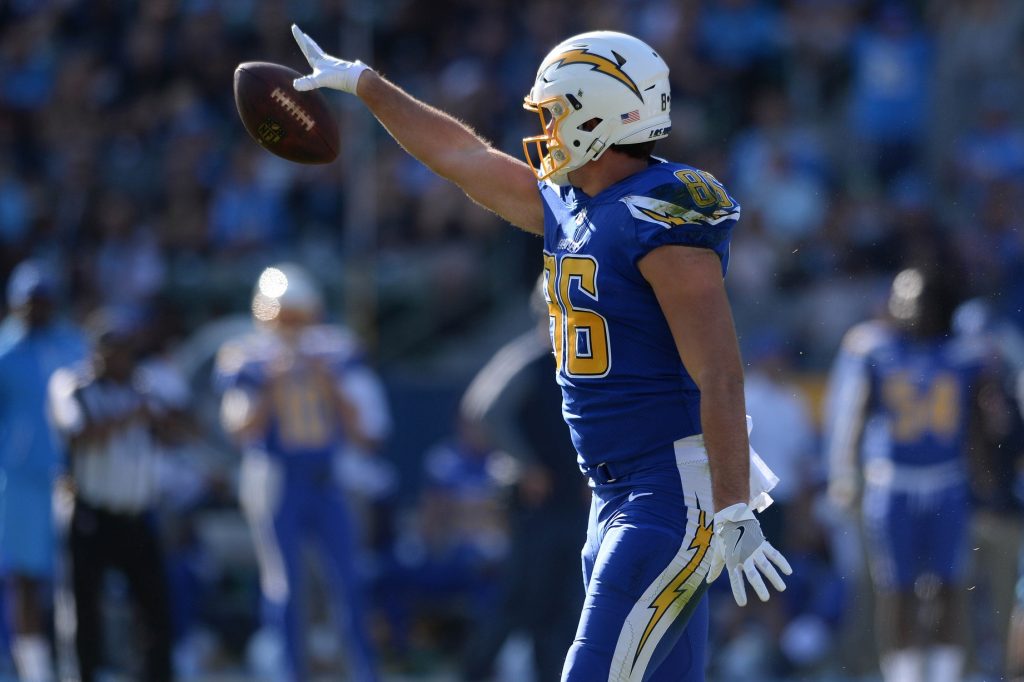 This final post in my recent series of taking a first look at each position will be a little shorter than the rest of my posts, just because I view this position pretty simply in 2019. If you aren’t attacking this position early with the likes of Travis Kelce, Zach Ertz and George Kittle, then you’re waiting until the later rounds like everyone else in your league. And that’s okay, because there are three specific Tight Ends that you should be targeting, and three very solid options at that.

This article will be a first introduction into my thoughts about the TE position for fantasy this year. As we get deeper into the training camp and pre-season, I’ll continue to update my feelings on the position, as well as detailed player previews as I see fit.

*Note – All ADP data corresponds with 10-team PPR leagues, and is courtesy of Fantasy Football Calculator*

If you don’t want to pay up for one of Kelce-Kittle-Ertz, I love the value in the 6th round for what should be the 4th-best TE in fantasy this year, Hunter Henry. While it’s never great to invest in a player coming off of an ACL tear, the good news for Henry and potential fantasy owners is that he returned to Chargers practice late last season, so he’ll be fully healthy for the start of training camp. Not only is Henry very productive in general, but with the departure of Antonio Gates, Henry’s usage rate will only go up as a result. From 2014-16, Antonio Gates saw 6.9 (nice) targets per game, so if Henry can maintain his current averages with this usage, his production will be similar to what George Kittle averaged last year. Henry has perfect value in the 6th round.

Thanks to the departure of Antonio Brown and Jesse James, McDonald has a great shot of expanding his role in the Steelers passing offense. Finishing as the #10 TE in PPR formats last season, he caught 50 passes on 73 targets for 610 yards and 4 TD’s. If McDonald can stay healthy, he’ll no longer have to settle for 50% snap rates with another TE on the field, and has a bunch of upside for a 9th-round price tag.

Hooper is about as sexy as a frog costume on Halloween, but he’ll get the job done for someone who punts the position on draft day. He finished as the #6 TE last season, and has increased his targets, receptions, and yards each of the past two seasons. I don’t love that Dirk Koetter is the new OC in Atlanta, but Hooper is a safe bet to continue to produce in Atlanta’s passing offense that will still be productive. And with a 13th round price tag, there’s almost zero risk with taking him on draft day.

Tight Ends I’ll Stay Away From

There is some reason to be optimistic about Engram in 2019 with OBJ leaving this offense, but with the addition of Golden Tate into the fold, there is even more doubt to his fantasy stock in 2019. Tate has garnered a bunch of targets over the years both in Detroit and Philly, and could definitely take away from Engram. Also, I’m never one to be shy about the fact that Eli Manning has sucked almost every ounce of joy and optimism I usually have for Giants receivers before the season, and he’s bound to do it again to both Tate and Engram as well. If I’m missing out on Kelce-Ertz-Kittle, I won’t be going for Engram or Ebron (more on him below), I’ll either go for Henry a round earlier, or wait even later for some cheaper options.

Ebron had an career-year in 2018, hauling in 66 balls on 110 targets for 750 yards and 13 TD’s. However, he’s a big regression candidate in 2019. There is little chance he’ll be able to follow up an astounding TD-rate that saw him score once ever five receptions. Factor in the return of Jack Doyle into the fold, and Ebron isn’t a good bet to come anywhere near his 2018 numbers.

What are your thoughts on TJ Hockenson and Noah Fant?

I think they’re fine super-late-round targets, but I don’t feel great about having them as my TE1 unless I’m playing in a super deep league.

I would keep Adams, Julio and Fournette. It’s a tough choice though…