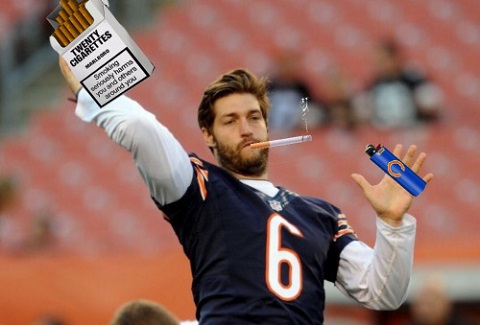 Welcome to the Razzball streamer article.  It has certainly been a week of surprise and self-reflection for all of us.  Whether you’re happy about the result of the election or not, it’s time for us to focus on things that we can change, our fantasy football lineups! The bye weeks continue to roll in/ and it’s been my job to help you with those fill-ins.  I hope you have found my weekly findings helpful as I’ve been lucky enough nail at least two players per week lately, usually at least one quarterback and one defense.  I was definitely disappointed that I missed out on the San Diego Chargers this past week though.  (I overlooked Mariota’s turnover tendencies.)  If I happen to overlook a player that you may like and I missed it, feel free to ask me in the comments section.  Let’s get to this week’s plays…

Jay Cutler, 21% Owned – Holy smokes, it is very tough to be a Tampa fan these days.  Even though Tampa’s pass rush has continued to get healthier, they lack pass rush and consistency in the secondary outside of Brent Grimes.  It has been two weeks in a row that the Bucs have been getting absolutely torched by opposing quarterbacks, and the week before the Derek Carr game, Colin Kaepernick even had a decent day.  Tampa has given up 8 touchdowns and over 850 yards through the air the past 2 weeks.  In rolls Mr. Cutler to visit the Bucs, whom haven’t won a game at home all season.  Cutler threw for over 200 yards and a touchdown in his return to the Bears lineup last Monday but he actually looked better and more competent than his stats showed.  I expect Cutler to put up over 20 fantasy points coming off of the bye.

Carson Wentz, 41% Owned – What Wentz wrong? (lololol) Carson started off the season looking like the surefire best choice for rookie quarterback, now he has come back to work.  Last week, we discussed his lack of fantasy points over the previous three games and you can go ahead and add another subpar fantasy day to that total.  Not all was bad last week for Carson Wentz though.  Despite his two first half interceptions, he was able to torch a much improved Giants defense for 364 passing yards.  The Eagles welcome the Falcons to town, whom despite all of the sacks they’re getting, they are giving up passing touchdowns.  Last Thursday, Jameis threw three of his own while Mike Glennon added one late.

San Diego Chargers DST, 42% Owned – I am a lot late to this party.  Since Joey Bosa has joined the defensive line, the Chargers have 3 games with at least 16 fantasy points.  They are creating turnovers, scoring touchdowns, and getting to the quarterback.  Whether stud breakout Jatavis Brown returns this week or not, I like San Diego’s chances of putting together another big game against the middling Miami Dolphins.

New York Jets DST, 42% Owned – Despite a disappointing performance last week against the Dolphins, I like the Jets this week against the Rams.  There is nothing in Jeff Fisher’s offense to like.  It’s worse than ‘7-9 bullshit’.  Todd Gurley is not putting up the numbers that he is capable of and Case Keenum failed to even put up 15 fantasy points against a Carolina secondary that is still far from figuring it out after the departure of Josh Norman.  In the two games previous to the Miami game, the Jets caused 5 turnovers combined and I’m sure one of the best defenses against the run welcome the challenge of shutting down Jay Ajayi.

Green Bay Packers DST, 46% Owned – The problem with the Packer D/ST play is the points that they have given up the past two games.  But those two opponents had Matt Ryan and Andrew Luck under center.  The positive note is that the Packers have caused 6 turnovers in the past 4 games.  Another positive is that turnover prone Marcus Mariota is waiting for Green Bay in Nashville.  Mariota is balling from a fantasy standpoint, but four turnovers in the past 4 games leads to positive points for our streamer, which we all love.  Let’s just hope the Packers can hold the Titans to around twenty points or less.