Welcome to the Razzball streamer article!  I’m coming to you live from my brand new laptop, and let me tell you, compared to my old lap top, it’s incredible.  I feel like I went from a Ford Fiesta to a Tesla.  So I know that I have expressed my annoyance in the past with Cris Collinsworth and how he commentates on Sunday Night Football.  That will never happen again… 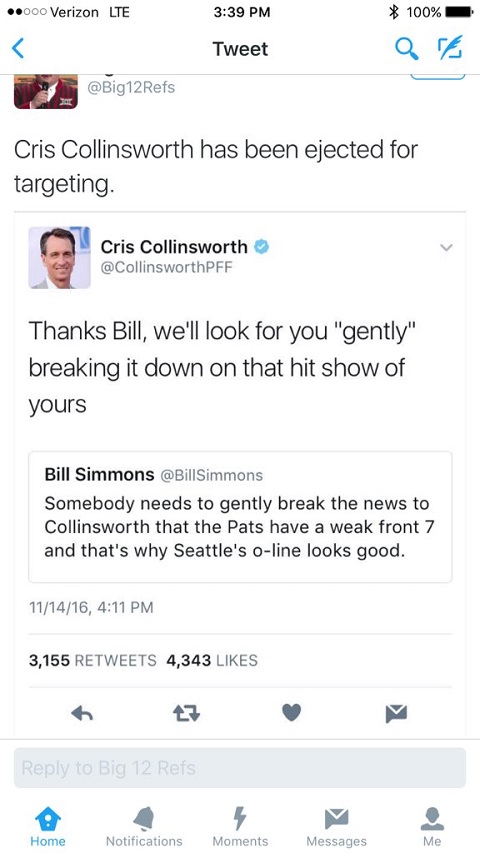 I have a newfound respect for Collinsworth after the way he absolutely roasted Bill Simmons on Twitter.  I am a big Bill Simmons backer despite some of the less than stellar takes that come out of his mouth and his obvious homerism getting in the way of having a respectable opinion.  He’s very entertaining and one of the best interviewers that I have come across.  Collinsworth’s timing could not have been better, he was lobbed a hanging curveball, and just like Kris Bryant he took it 450 feet into the left field bleachers.  Hopefully Simmons now realizes that he should give it a month before he tries to throw shade on twitter.  Now time for some streamers.

Colin Kaepernick 13% Owned – Kaepernick may be the best kept secret in fantasy football.  This is quite a surprise considering that his name can’t stay off of sports radio.  Maybe his political stance has something to do with this, but in our case, let’s look past his opinions and the 49ers record and get us some fantasy points.  Kaepernick has scored 23 fantasy points in each of the past two weeks and has scored no less than 15 so far this season.  He’s probably not even the best passer on his own team but like I mentioned in this post two weeks ago, the rushing yards are stacking up the points, making him usable if you have a bad matchup.  The 49ers welcome the New England Patriots this week and every Patriots fan including the aforementioned Bill Simmons is bitching about the defense that gave up 370 yards and 3 touchdowns to Russell Wilson.  I expect the Patriots to come out with a vengeance and for Colin to have a possible two full quarters of garbage time.  Perhaps Matt Patricia will bring out his famous prevent defense for a while.

Brock Osweiler 10% Owned – The weeks are few and far between that I would recommend Brock Osweiler.  One of those occasions would be when he is facing the Oakland Raiders.  Osweiler has scored 17 fantasy points on three separate occasions this season against teams who struggle against the pass (Chicago, Indianapolis, Tennessee).  The Raiders rank 25th in passing yards given up, 23rd in touchdowns given up, and they aren’t exactly racking up the interceptions with only eight on the season.

Miami Dolphins DST 21% Owned – The Miami Dolphin’s defense has been on an absolute tear in their last two games.  In just those two weeks, the Dolphins racked up six sacks, six interceptions, and three defensive/special teams touchdowns.  Between Suh and Wake, the Dolphins have all of the talent in the world to create havoc against Jared Goff in his first NFL start for a team that hasn’t scored a touchdown in two of it’s four wins this year.  Also, if you haven’t heard, Jared Goff had a bad training camp and he hasn’t started a game until week 11 for possibly the worst offense and history.

Cincinnati Bengals DST 28% Owned – The Bengals have under-performed this season on defense.  Teams being able to run on them has contributed greatly to this surprisingly disastrous season.  On two separate occasions this season, the Bills have been held to 7 and 16 points respectively.  And despite a few home game explosions, Buffalo has only cracked 30 once on the road.  Also the Bengals have created turnovers in three straight games.  I expect them to step it up in an absolute must win game.

New York Giants DST 15% Owned – The Chicago Bears are rolling into town bringing Jay Cutler, his turnovers, and his lack of effort with them.  There is also this weird week going on with Jordan Howard.  Howard was clearly shaken up after a 4th quarter play against Tampa and John Fox later confirmed this.  Jordan Howard is denying that he was injured at all and doesn’t know why coach Fox said this.  Either way, the Giants strive against the Bears’ biggest threat, the running game.  The Giants also have multiple sacks in four straight games, and Jay Cutler has a tendency to fumble when he is hit with the ball in his hands.