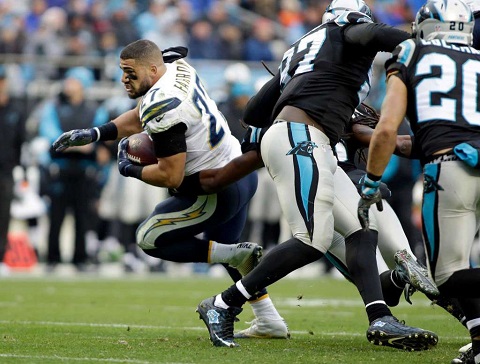 Welcome back to the Razzball streamer article.  For most of you still reading this article, you’ve made it to the semi-finals, congratulations. If you didn’t make the semi-finals and you are reading this, you are probably my editor (Sup, Jay). A key running back injury and a lingering wide receiver injury has led to me recommending more than just defenses this week.  So let’s get down to business with our second to last I Scream, You Stream of the 2016 season.

Kenneth Farrow RB, Chargers 29% Owned – Farrow didn’t have a break out performance by any means in his role filling in for injured Melvin Gordon.  Farrow’s stats, however, were serviceable and he looked pretty good to me when he touched the ball.  The 6 receptions were especially encouraging to me as a man of many PPR leagues.  With San Diego visiting Oakland this week, Rivers is going to need a safety blanket with Khalil Mack and Bruce Irvin coming after him.  While hauling in a few emergency passes, Farrow will receive the majority of the team’s rushing yards, and hopefully will find himself in the end zone at least once.

Taylor Gabriel WR, Falcons 52% Owned – From what I heard earlier this week, it doesn’t sound like Julio Jones is going to suit up against the 49ers.  This will not hinder the game plan of MVP hopeful Matt Ryan.  Gabriel is the big play threat of the remaining wide receivers and he was doing his thing before Julio went down as well.  Gabriel has six touchdowns in the past six games and I see him getting another one against a weak 49ers defense.  I’m starting Gabriel as a WR3/Flex play and not looking back.

Miami Dolphins DST, 56% Owned – The Dolphins face another must win game against the New York Jets this week and they sure as hell showed up to their previous must win contest.  Against Arizona, they sacked the quarterback three times and forced four turnovers while adding on some nifty special teams points.  Matt Forte might sit out another contest and Bilal Powell isn’t running against the 49ers defense.  The Dolphins allow only 234 yards per game through the air and Bryce Petty is bringing his two touchdowns and four interceptions on the season with him.

New York Giants DST, 31% Owned – This Giants defense didn’t miss a beat with JPP sitting out of the Sunday night contest against the Dallas Cowboys.  The Giants have multiple sacks in eight straight games and have scored at least 19 fantasy points in two out of their last three games.  Matthew Stafford will be playing in a cold weather game with a broken middle finger on his throwing hand.  Look for the Giants to be able to rush Stafford and for this highly touted secondary to capitalize on mistakes.

Tampa Bay Buccaneers DST, 13% Owned – Don’t shy away, I smell blood in the water in Dallas.  Dak Prescott has to bounce back from a bad performance in a prime time game against a defense who has ranked #1 in a lot of categories over the past four weeks.  Tyron Smith did not practice on Wednesday which could lead to a favorable condition for the Bucs if this trend continues going into Sunday. My one worry about playing the Tampa D/St is their rushing defense, especially facing one of the two best backs in the league.