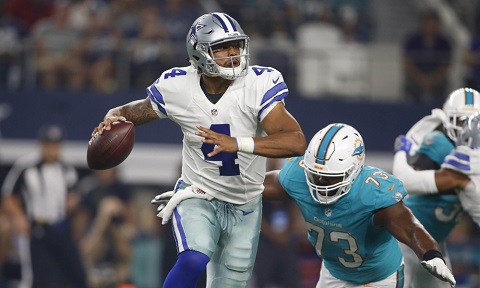 Welcome back to the streamer article.  We scored some touchdowns last week and some week 1 names turned in better performances in week 2.  I feel a lot better about the picks and I think we have a nice slew of streamers this week especially at the quarterback position.  As for the running back position, I am going to stay away from it.  I don’t like any of the match ups coming up this week from the bloodbath of running back injuries.  If I had to pick one, it would be Fozzy Whitaker from Carolina coming off of a 100 yard performance in relief of Jonathan Stewart.  If you are looking for running back replacements you should check out [email protected]’s week 3 waiver wire article and he can help guide you through it.  Or you are always welcome to ask me in the comment section.  Without further ado, here are your week 3 streamers, ownership percentages brought to you by Yahoo as of Tuesday evening…

I haven’t flip-flopped on my opinion of Dak Prescott.  He played a lot better in week 2 but I’m still not in a rush to go out and add him as a multiple week starter.  His matchup this week is absolutely beautiful against the Bears on Sunday night.  The Bear’s front seven is now more shredded than Phillip Rivers’ wife 2 kids ago.  Trevathon is having surgery on his thumb and Lamarr Houston tore his ACL Monday night without even celebrating a sack.  Eddie Goldman also has a high ankle sprain.  I can already hear Collinsworth singing Dak’s praises calling him the next great hall of fame quarterback.  It’s going to be so annoying.  Anyways, Prescott made Dez Bryant useful to owners last week on his way to 292 passing yards and a rushing touchdown.  I’m not worried about the Bears giving up an average of under 200 passing yards per game through 2 weeks, I don’t think they will be able to generate any pressure and the Cowboys should move the ball at will.

The older half of the “Garbage Time Twins”, a duo I made up that includes the former and Blake Bortles, put up a whopping 389 yards through the air last week in an effort to catch up with the Patriots.  Joe Flacco had an elite outing against the Browns last week and I think that Tannehill will do the same.  Devante Parker came on last week and Jarvis Landry had himself a very nice PPR day himself, so the weapons are still intact.

Here we are with possibly the best receiving threat left on the Browns until Josh Gordon comes back.  He will also be the biggest receiving threat when Josh Gordon fails another drug test by the end of November.  If you haven’t heard, Corey Coleman went down with an injured hand and is likely going to miss some time.  Terrell Pryor is averaging 16.67 yards per reception and should be able to haul in more than three balls from Cody Kessler against a struggling Dolphins secondary.  I like Pryor as a general waiver wire pick up because of the upside.

He did it! I was so happy when he had a good week last week.  I own Clive Walford in pretty much every league.  He is what I wish Austin Sefarian-Jenkins would be.  Anyways, the Titans have given up over 50 yards in both games to opposing tight ends.  I think Clive really gets the ball rolling this week, I don’t think he drops any passes and hopefully finds the end zone again.

The Bears offense is a joke.  Alshon Jeffery is the only playmaker that they actually try to get the ball to.  Jeremy Langford is averaging under 3 yards per carry and Jordan Howard has only toted the rock 3 times in his career thus far.  Jay Cutler will throw at least one interception, so that should give you some points.  I think an atrocious home loss to an Eagles team that is going to be exposed in the coming weeks could’ve been the dagger in the Bears season before it even really started.

68 percent of leagues aren’t paying attention to whom the Dolphins are playing this week.

Give me a follow on the Ol’ Twitter machine and tell your friends about Razzball if you like what you see.  Also, make sure you are checking out our weekly football projections.  The higher ups work really hard on it and it is very helpful  I’ll talk to you in the comment section, and I’ll see you next week.