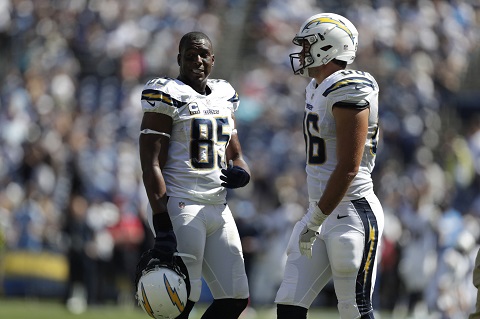 Welcome back to the Razzball streamer series!  Once again, we had a pretty solid Week 3, so I’ll look to keep the ball rolling into Week 4.  We have our first London game on the slate this week.  I’m always way more excited for London games during the week knowing that I can watch football at 8:30 A.M. than I am when I actually am about to… but I am going to go ahead and enjoy the prospect of watching 14ish straight hours of football. Today’s big streamer is Hunter Henry (13% owned), but even I’ll admit that this is an iffy play based on the health of Antonio Gates. But if Gates doesn’t play I expect Henry to eat… he saw his share of targets on his way to 5 catches for 76 yards against the Colts last week and New Orleans would be a great match up to continue that trend.  Philip Rivers will be attacking this weak defense through the air…

Last week I predicted that Collinsworth would call Dak Prescott a Hall of Famer and he blew me out of the water by comparing him to Roger Staubach.  My head almost f*cking exploded.  I’m turning my anger towards Collinsworth into a positive and we are going to have some fun with it each week.  Collinsworth’s takes include so much hyperbole and so little fact that he makes Donald Trump look like he has a doctorate in statistics.  This week I think Collinsworth’s darling will be Alex Smith.  I don’t imagine that Cris will call him a Hall of Famer, but I imagine he will say something along the lines of:

“Alex Smith really is the glue that holds this Chiefs team together.  Alex doesn’t get credit for being one of the most consistent week-to-week quarterbacks that we have ever seen in this league.  And I’ll tell you what Al, I will be the least bit surprised if Alex Smith can string together some playoff wins and get the Chiefs to the Super Bowl this year.”

Now let’s get to some streamers, shall we?

Trevor Siemian, 21% owned – This is easy.  Trevor Siemian really got it going last week against the Bengals defense on the road.  Now he faces a weaker opponent in the Tampa Bay Buccaneers.  With Trevor steadily building a connection with Emmanuel Sanders and Demaryous Thomas I think this is a no-doubter.  Each opponent through the first three weeks have thrown at least two touchdown passes.  Last week, Semian threw for four touchdown passes and 312 yards.  I will be starting him over Jameis Winston without second thought.

Marqise Lee, 1% owned – Marqise Lee has back to back weeks with five catches.  The yard totals have been mediocre but in PPR leagues, one is rarely upset with a WR3/flex option who hauls in five balls.  The Colt’s gave up over 30 points in the first two games of the season and still gave up 330 passing yards to Philip Rivers on the way to a season low of 22 points.  For at least one more week, Lee should continue to be effective and I am predicting his best 2016 game to date.

Adam Humphries, 4% owned – Humphries appeared in our waiver wire article this week, and for good reason.  Jameis Winston has been targeting Adam a lot on short and intermediate routes.  Vincent Jackson has basically been phased out of the offense.  Last week, Adam Humphries collected 100 yards on 9 catches in garbage time against the Rams.  I expect there to be a lot of garbage time against the Broncos this week as well, and the general consensus is the Broncos will try and lock down Mike Evans. (Shout out to this week’s In This League podcast episode with Howard Bender on the Mike Evans bit.)

Dwayne Washington, 31% owned – Dwayne Washington and the Detroit Lions have a gravy matchup against the Bears this week.  So far, Washington has been fairly ineffective for fantasy owners but this could be his break out week.  The Bear’s front seven is still very beat up and gave up 140 rushing yards to Ezekial Elliot last week, whom up to that point had not been off to a great start in the NFL.  Another reason that I like this play, is because I think that the Lions will jump ahead pretty early and Washington will get a healthy portion of carries in the 3rd and 4th quarters.

Dallas Cowboys DST, 5% owned – The Cowboys have forced a turnover in each of their first three games and haven’t given up more than 23 points this season.  I think the 49ers match-up is a medium ceiling,low floor play if you don’t have a good defense you use on a weekly basis.