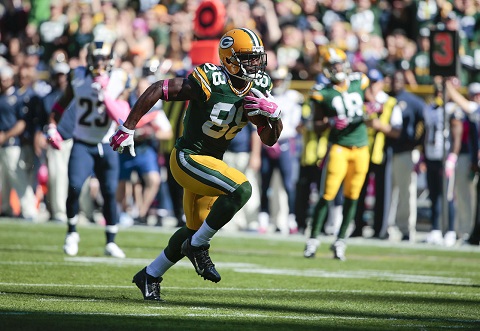 Welcome to the Razzball Streamer article. I’m going to keep the intro short tonight as I prepare for my debut podcast appearance with my fellow Razzballians.  We will talk about football, West World and perhaps even the debate, so be on the look out for that to come out.  We have had quite the week of running back injuries, surprise bye week torn ACLs, and other really weird stuff.  So we have plenty of streaming options which makes my job easy.  So let’s get right to it!

Ty Montgomery, 31% Owned – Montgomery had himself quite the week against the Cowboys and is in line to see a lot of touches against the Chicago Bears with Eddie Lacy being held out with a kankle injury.  Even if he doesn’t see enough carries from a traditional running back sense, he should be able to see a lot of touches as the 3rd receiving option.  The match verses the Bears is also pretty nice as Aaron Rodgers looks to quiet his naysayers.

Alex Smith, 32% Owned – Let’s go back to the well once more.  Alex Smith was a no-brainer last week against Oakland but the weather did not cooperate.  I’m willing to try anything twice, except for a lot of things, but I would try streaming Alex Smith twice.  New Orleans is still very trash against the pass, even if their pass rush did look better against the Panthers last week.  Like I said last week, Alex Smith is able to take advantage of good matchups (see: Week 1, San Diego, and garbage time during Week 4 against Pittsburgh).

Jaquizz Rodgers, 34% Owned – It looks like Doug Martin will be out at least for this week.  Jaquizz was great against Carolina going for over 100 yards rushing and he saw a lot of touches as the only real viable option out of the backfield.  The 49ers are tied with the Indianapolis Colts for giving up the most fantasy points to running backs (141.)  I expect my Buccaneers to be up 63-0 by halftime so that should lead to a lot of touches for Jaquizz in the second half.  In all seriousness, Koetter is trying to eliminate mistakes from Jameis Winston by establishing the run, so the work will definitely be there for him.

Andrew Hawkins, 0% Owned – Terrelle Pryor being is bothered by a hamstring strain and did not practice on Wednesday, you may not know this unless you are a Terrelle Pryor owner.  Players do not play well when they try and play through a hamstring injury.  I’ve seen Mike Evans do it plenty of times.  Hawkins has at least 48 yards in the past 2 games including a touchdown two weeks ago.  One would think that Hawkins is next in line to grab targets from Kessler who is low-key not that bad.  I could see Terrelle Pryor being a decoy if he’s on the field which should be good thing for Hawkins, I’m telling you, hamstring injuries are very uncomfortable when your legs are your biggest weapon.

New York Giants DST, 14% Owned – They are playing Jeff Fisher’s offense after a long flight to London.  If you’re just joining us, the Rams don’t score very many points.

Baltimore Ravens DST, 48% Owned – Baltimore’s defense is coming off of 2 straight games of scoring at least 10 points. The Jets are coming off a 3 point performance against Arizona.  Not having Eric Decker has really derailed Fitzpatrick’s offense.  The Jets are turnover prone, so this should be a home run.