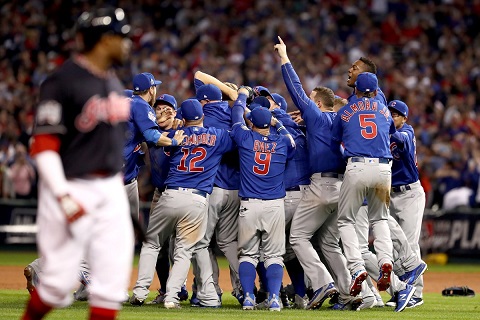 Welcome to the Razzball Streamer series… I am writing this a day later than usual because Game 7 of the World Series had me too stressed yesterday.  I’ve been a Cubs fan since a kid, one of my favorite memories from when I was young was seeing Sammy Sosa hit a game changing home run in the 7th inning against the Diamondbacks while me and my dad cheered from seats down the 3rd baseline at Wrigley Field.  Last year, we went to a couple Cubs games at Miller Park in early August when they were in the heat of the Wild Card race.

Nothing compares to last night.  I wasn’t within a 300 mile radius of Cleveland, but the energy at my house was unreal.  I got to watch it unfold with my wife, my dad, my kid, and a couple of my good friends.  It is still surreal that I cared about baseball in November.  I’m 28 years old and can’t imagine what it was like for fans twice or three times my age to finally see the Cubs win the World Series.  I guess it is just nice to be in the winner’s circle for once.  I’ve never been in a better mood.  So I’ll try and pass you these good vibes with some good streamers for Week 9!

Ryan Tannehill, 32% Owned – A familiar face from last week’s steamer article Josh McCown torched Revis and the rest of the Jets defense so I’m going to double down and go with Ryan Tannehill.  Tannehill has two 300 yard games through the air this season and I think number three happens this week.  Along with giving up the most yards through the air this season, the Jets have given up the 7th most touchdowns and rank 25th in yards per attempt at 8.0.

Colin Kaepernick, 14% Owned – Colin Kaepernick has put up decent fantasy days in both of his starts so far this season.  His lowest rushing total to this point is 66 yards, that’s 6 points right there before you even get to the defense that he will be throwing on.  The New Orleans Saints are already in the 2000 yard club in passing yards against seven games into the season.  Just like the Jets, the Saint also have given up 8.0 yards per attempt.  A little pressure should be lift off of his shoulders with the return of Carlos Hyde.

Dallas Cowboys DST, 38% Owned – The injuries to Morris Claiborne and Barry Church hurt the secondary a lot but I think Dallas is still a good play against the Browns.  While they rank in the middle of the pack in passing defense, it is their run defense that carries them.  Dallas has only given up 3 rushing touchdowns this year while also ranking 7th in rushing yards against.

Detroit Lions DST, 10% Owned – The only reason I want to play the team who ranks dead last in 3rd down defense is because the offense they are playing against is amongst the most atrocious dumpster fires in the NFL.  Their offensive line is clueless, Stefon Diggs has cooled off, and Matt Asiata is clearly not a game changing back who can make due with a bad line leading the way.

New York Giants DST, 10% Owned – The New York Giants are in the middle of the pack in passing yards given up but rank 6th in touchdowns given up.  The Giants have also given up the 8th least rushing yards and only 5 touchdowns on the ground.  Carson Wentz has scored 7, 8, and 11 fantasy points consecutively in the last three games.