As we all know there are many ways to skin a cat and drafting your fantasy football team is no different.  Don’t draft a QB early.  Zero RB strategy. Grab at least 2 RBs in the first 3 rounds. Which one is right? Well the one that wins of course as each season presents us with different options depending on trends in the NFL. With IDP leagues becoming more and more popular and many trying them out for the first time, what are some strategies that will help you win?

I’ve covered defensive back strategy and the theme there was to wait on them. I recommend the exact opposite approach to the defensive line position.  Pounce! Jump on one and then do it again. I’m going on the assumption that you will be starting at least two defensive linemen. Do you need to take them with your first two defensive player picks? No, but you have to pay close attention to your draft.

I pulled data from my home league to illustrate why I believe this strategy is one you should follow. Again, as I’ve said over and over the point system of your league is the most important thing when formulating your strategies. Our league is big play heavy with only ½ pt per tackle, 3 pts for sacks, forced fumbles, fumble recoveries, interceptions and 2 pts for passes defensed. Many leagues are now attempting to balance out defensive scoring by assigning different values for each tackle/sack/etc based on position. This doesn’t change my strategy as there is a big dichotomy between the high end defensive linemen and the rest as my rankings article suggests.  Once you get beyond the top 25, there isn’t much of a difference between the players after that.  Remember to check your host site as some high scoring linebackers such as TJ Watt and Shaq Barrett may carry a DL/Edge designation in 2020 and this will alter your rankings. 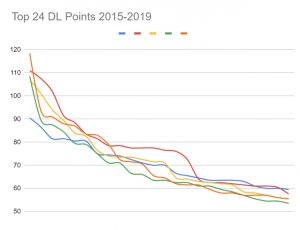 The first thing you notice is that once you get past the midpoint of each line, it flattens out indicating that there are decreasing differences between players after DL12 in these five seasons.  Having one of the top 12 is essential, but two, gives you a distinct advantage.  2019 saw the lowest point scoring DL1 at 90.5 and the highest was 118.5 in 2015.  The low points fall between 53.5 in 2016 and 59.5 in 2019.

Now let’s look at the midpoints. In 2019 it was 70, a difference of 20.5 from the top and only 10.5 from the bottom. This turned out to be the smallest differential from top to bottom as 2019 was the only year with the DL1 scoring less than 107. Every other year the difference between DL1 and DL24 was over 50 points. There is a clear advantage in taking the top of this category but what if you’re unlucky enough to take the preseason DL1 but he ends up as the DL5?

There is still a roughly 20 point advantage between the average top 12 DL and the second tier DLs. By acquiring two of the top 12 you put yourself at an advantage of about 40 points over someone who waits on the position even if you just get an “average” top 12 player.

Ok, so I told you to take two d-linemen, but aren’t linebackers the bread and butter of IDP? They are and they will be the most consistent scorers but the difference between the first and second tier is smaller and securing two top linebackers is not as advantageous. Let’s look at the same parameters for linebackers over the same time frame.

First let’s look at 2018 and 2015 where there were two outstanding seasons that were outliers. In 2018 a rookie named Darius Leonard burst on the scene and outdistanced his fellow linebackers by 23% and in 2015 Lavonte David did it by 19%. If you take them out the average difference between the top scoring LB and #12/13 is 21 (30.7 with them) compared to 37.5 for the linemen. The top to bottom difference averages 35.3 compared to 50.8 for the linemen.

This smaller differential is why you can go after your linebackers AFTER you get your linemen. Do you have to go DL, DL, LB, LB? No, but I’d take my second DL before my second LB in most situations. Taking two linebackers first will not win you your league unless you get lucky with one of those outlier seasons. Taking two defensive linemen gives you a better chance at separating yourself from the pack. If you add into being stealth about taking certain DL and LB based upon your scoring system, you can dominate the defensive part of your draft.