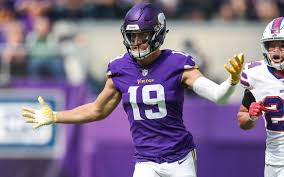 Sometimes relationships grow cold. At the beginning of a relationship: you get butterflies in your stomach, you want to pick up every check, and you always want to be around that person. As time goes on, little annoyances start to happen. You start to notice some flaws. Your patience gets a little shorter even if you don’t say anything at first. Over time, you become more distant. You want to hang out with people that make you feel good and before you know it, you’re 13 Budweisers deep at the gentleman’s establishment getting the number of an exotic dancer named Lola.

The previous two seasons, I was a big fan of Adam Thielen. I would send gifs of his routes in group chats when someone would dare say that Stefon Diggs is a better receiver than him. I’d specifically switch from the Red Zone Channel over to the Vikings’ game every time that I knew that they had the ball just to catch a glimpse of Thielen making a first down grab. All of a sudden about halfway through last season, something got between us. His name is Mike Zimmer. When the season is over, it was time to tell Adam Thielen that I wanted to see other keepers.

Adam Thielen did something remarkable last season. Through the first eight games of the season, Thielen had at least 100 yards in every single game. In 7 of 8 of those games, Kirk Cousins targeted him at least 10 times. Things. Were. Great. Hind sight is 20/20 and I’m sure that almost every Adam Thielen owner wish they traded him at that point because we could have gotten almost any player we wanted. Shout out to the owners that did sell high. I have a job waiting for you.

One problem that happened in Minnesota was that the passing game became almost irrelevant. In the first 8 games, Kirk Cousins attempted at least 34 passes in every game. Over the final 8 games, he only attempted more than 34 passes three times including zero of such games over the final four. In the final nine games, Stefon Diggs saw double digit targets five times. Adam Thielen? twice. What did Adam Thielen do to you, Kirk?

Or was in all Mike Zimmer? It seems like the month of December was chocked full of Mike Zimmer making comments about wanting to pound the rock with Dalvin Cook as the Viking’s playoff hopes continued to slip through their little purple fingers. Were there mistakes made in Zimmers’ eight eye surgeries. It appears so. The Vikings fired fantasy football wet dream John DeFilippo and replaced him with Kevin Stefanski. Stefanski happens to be the longest tenured member of the Vikings coaching staff. He’s obviously a Mike Zimmer guy. That’s like a company’s union representative being best friends with the CEO.

It isn’t crazy to at least consider taking such a talented player at his current ADP in the middle of the 3rd round. Personally, if I’m taking a wide receiver in the 3rd round because someone took Damien Williams before me, I’m going to snatch up Julian Edelman, Keenan Allen, or maybe even Amari Cooper. Perhaps time will heal and Adam Thielen and myself will find our way back to each other.