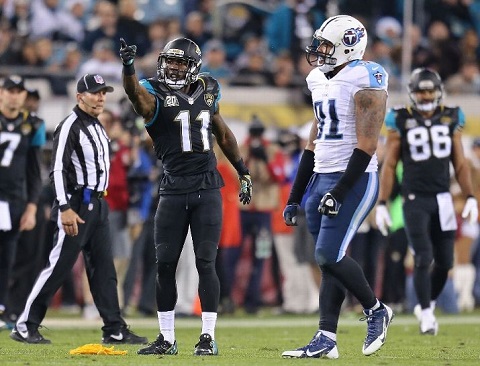 So, I’ll be honest… I’m not quite sure if what I saw last night was an okay game or a boring one. True, we are talking about a prime time game that featured a then 2-12 Titans team vs. their ultimate mirror universe nemesis, the also 2-12 Jaguars. Let’s just say if they figured out how to include both the Raiders and Buccaneers on the field at the same time (why isn’t this a thing?), I would have fainted. And while there was some subtle competency from Charile Whitehurst (perhaps trying to grab the attention of Washington) at the beginning of the game, driving 12 plays and 84 yards for a touchdown, the game kinda settled into a mix of “gee, this seems like a good time to try heroin” to “I was promised derp! Where is the derp?” So, in the end, there was a mildly entertaining game between two teams that kinda stink. Which, I guess seems fitting for the end of Thursday Night Football this year, in that, this was probably a top-5 game for them this season. Scary, I know. So… with a Jaguars win and a Titans loss, the resounding takeaway probably is: YOUR MOVE JETS.

Toby Gerhart – 12 CAR, 53 YDS, 1 TD and 1 REC, 7 YDS. Left the game in the fourth quarter with a “rib contusion”. I’m not sure when he’s ever healthy, but he looked moderately okay-ish running between the tackles. Which only took, you know, 15 games. Better late than never I suppose…

Charlie Whitehurst – 24/35, 287 YDS, 1 TD and 3 CAR, 12 YDS. And thus they buried Clipboard Jesus, who would rise three days later, and wonder where the the team bus went without him. It’s too bad… Whitehurst’s mullet had finally found a city it felt comfortable in.

Bishop Sankey – 14 CAR, 44 YDS and 1 REC, 9 YDS. Bishop Sankey has a doppelganger named Sishop Bankey. This seemed like a situation where you’d want to know such a thing.