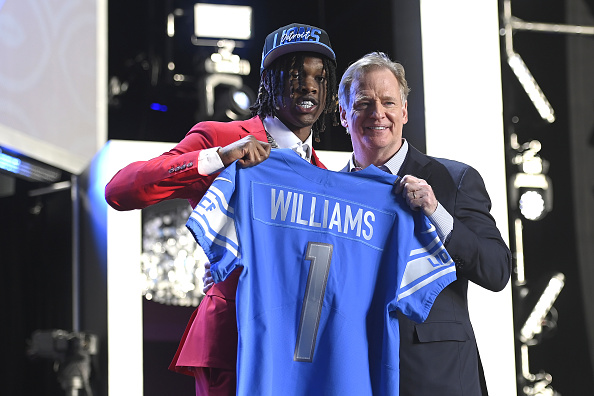 LAS VEGAS, NEVADA – APRIL 28: (L-R) Jameson Williams poses with NFL Commissioner Roger Goodell onstage after being selected 12th by the Detroit Lions during round one of the 2022 NFL Draft on April 28, 2022 in Las Vegas, Nevada. (Photo by David Becker/Getty Images)

What do Billy Corgan with Smashing Pumpkins, David Lee Roth with Van Halen, and Adam Lambert with Queen all have in common? All terrible frontmen leading great bands. We are looking at the Detroit Lions today. You see where this is going? The Lions all of a sudden assembled an elite set of offensive weapons at the skill positions, but are still led by Jared Goff, the NFL equivalent of that Youtube guy who took over from Steve Perry in Journey.

You may recall Goff from past hits of the 2021 season such as #27 in passing yards per attempt, #28 in fantasy points per dropback, and #32 in Red Zone passing accuracy. I’m not sure how much longer the Lions can fool themselves that Goff is the answer at quarterback, but you’ve got a nice window open right now with the offense and you don’t want to spoil the prime years of their best pieces.

Besides stud wide receiver Jameson Williams, the Lions went all in on defense in this draft, likely making head coach Dan Campbell a little tight in the pants area. Besides Williams, six of their seven other selections were on the defensive side of the ball. No quarterbacks were to be found. The Lions will go into the 2022 season with a depth chart of Goff and Tim Boyle once again. Perhaps they are waiting on the stud 2023 class of QB and won’t have high aspirations this season? But that’s a dangerous game of chicken to play and the Lions have the pieces to compete soon.

On this revamped offense, who should we buy and sell for our dynasty rosters? With so many young weapons, it’s hard to make any cuts. Let’s dive in and look at a couple of options.

When we reach May 10th, 2022, it will be just four months since Alabama’s Jameson Williams tore his ACL during the National Championship game loss to the Georgia Bulldogs. You might think that an injury that severe that was so recent might scare teams off of him at the draft. But that just wasn’t the case for the Lions. After they got their defensive showstopper in Aidan Hutchinson at #2 overall, they had no issues grabbing Williams just 10 picks later.

According to reports and workout videos posted to Twitter, Williams is ahead of schedule and plans to be fully ready to go by training camp. If we get a full year out of Williams, he automatically gives the Lions a threat at all levels of the field. Target monster Amon-Ra St. Brown will work underneath, T.J. Hockenson takes the middle of the field, and Williams with his 19.9 yards per reception in 2021 will play the long game. Add in De’Andre Swift to the mix and this all of a sudden becomes a pick-your-poison situation for opposing defenses.

The 2022 season may not be the time we see Williams’ massive upside. That may have to wait until 2023 when the Lions likely upgrade at quarterback. But that’s what makes Williams such an intriguing buy right now in dynasty formats. With Goff at the helm and the ACL recovery looming, the price on Williams will likely never be lower than it is right now.

I’m glad Chark got his bag of $10 million after being underutilized in Jacksonville, but he must look around the Lions’ offensive room and realize he is the fifth-best receiving option on a low-volume team. Detroit ranked 18th in passing yards per game in 2021 and just 27th in pass yards per attempt (6.5). That doesn’t look great for Chark whose breakout season came in 2019 when he averaged 13.8 yards per reception and ranked top-20 in the league with 1,452 air yards.

After a broken ankle in game four of the 2021 season, Chark’s time in Jacksonville was clearly coming to an end and he needed this one-year show-me deal to prove that he can produce at the level we saw in 2019. After a huge step back in 2020 and missing 75% of 2021 with injury, the deal he was able to get from Detroit is mostly signing bonus and incentive perks. His path to reaching those incentives gets a lot harder with Jameson Williams on the team.

Assuming Williams is healthy for the bulk of the season, Chark is going to have a hard time standing out from Swift, St. Brown, Hockenson and Williams. Early half PPR expert consensus ranks peg Chark at WR55, which is not a bad price of admission. But give me guys like Skyy Moore, Van Jefferson, and Jameson Williams being slotted behind him.