It’s hard to believe that 2 months ago, Donkey Teeth was sleeping in a dumpster outside of Krispy Kreme and burning expired donuts for heat. One day, his muscle shirt got singed by the flame of a glazed gone wrong. The scorch marks on his only shirt formed the shape of a running back, and that scorch mark turned into a prophecy. Donkey Teeth placed two bear claws on his hands and found the nearest internet-equipped machine where he typed, “Jonathan Taylor RB1” to all the people who would listen. Now that November has arrived and Donkey Teeth has upgraded his abode to a camper that he parks in a Taco Bell parking lot, it seems like people are finally understanding the meaning of Donk. Let’s see what other news we can dig up from the Sunday slate:

Jonathan Taylor: Say it 4 times fast: tuddie, tuddie, tuddie, tuddie. I couldn’t even write that four times fast. The Colts are officially Jonathan Taylor’s team and those fantasy football mavens that snagged him in round 1 are probably quite happy. Or, maybe you just can’t be appeased. Don’t worry, be happy! Taylor ran the ball 32 times, which is probably more interesting than the billion yards he racked up on the ground. Take a look at the cohort of players that had higher-rushing attempt games than Jonathan Taylor over the past 5 years. 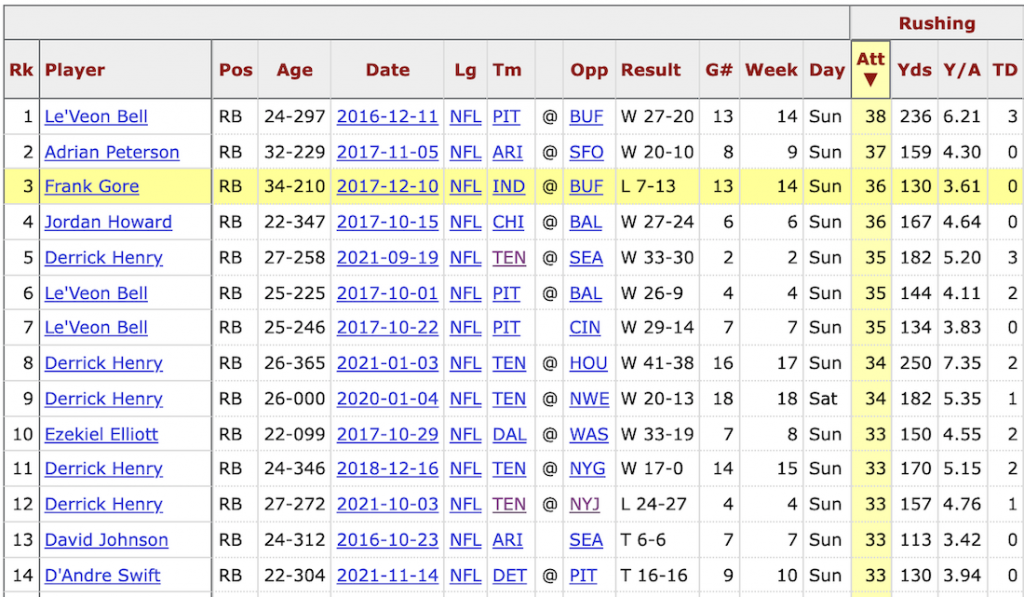 So, Le’Veon Bell and Derrick Henry are half that list. Also, D’Andre Swift is in great company. And Jonathan Taylor, I welcome you to “generational” talent. Jonathan Taylor is RB1 ROS, and Dynasty RB1, and DFS RB1, and worst ball RB320. Also, did anybody remember Adrian Peterson’s stint on the Arizona Cardinals? The second-leading rusher on that 2017 Cardinals team was Kerwynn Williams. Yeeesh. ENYWHEY. Congrats on calling the year of Jonathan Taylor, Donkey Teeth. You were the one who believed in him the most! I wished you believed in me half as much as you believed in Taylor. 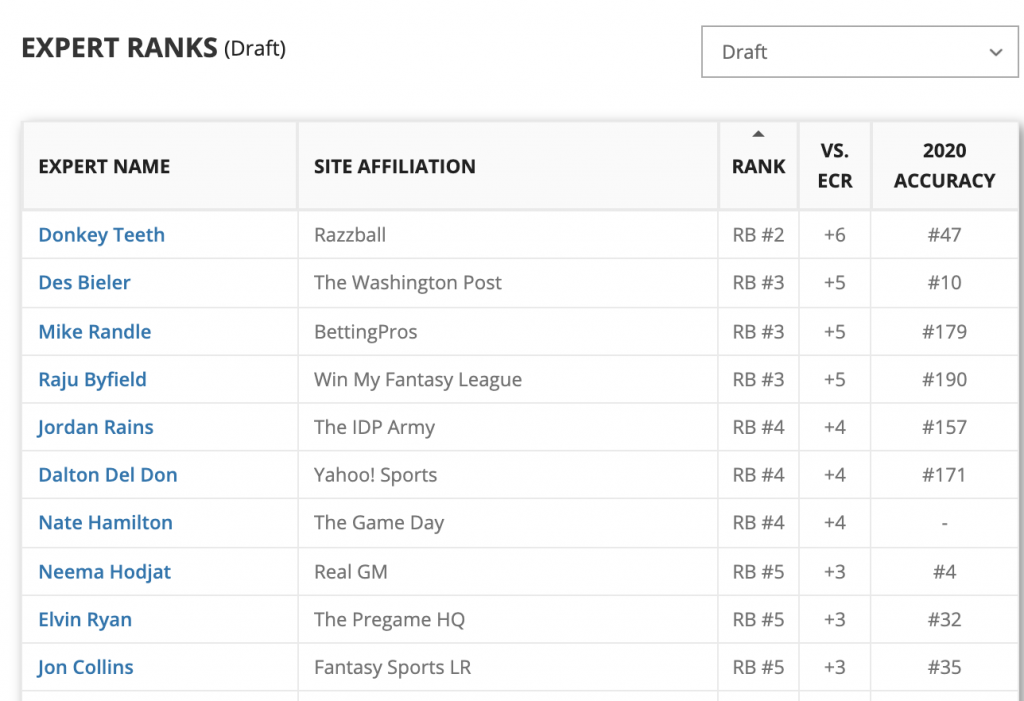 The Vikings / Packers Game: I had a feeling early in the morning that Vikings coach Mike Zimmer was playing for his job: his team has a losing record, the Vikings hosted the Packers at home, Aaron Rodgers has barely practiced in a month, and Aaron Jones was out of the game. If the Vikings wanted to stay in Wild Card competition against the [checks notes] Panthers, Saints, and Washington Football Team [starts laughing manically], then the Vikes needed a win. Like, this is the kind of game that an NFL manager throws everything at because it could literally be their career. Mike Zimmer, noted cornerback guru, has a bottom-run DEF and a losing record despite a fully-gassed up team and an NFC North featuring the Bears and Lions. Yeesh. Fortunately for my DFS lineups, the game blew up in a major way for us fantasy managers — Kirk Cousins put up 341 yards and 3 TDs and Justin Jefferson snared 8 receptions for 169 yards and 2 TDs. On the Packers side, Aaron Rodgers gathered 385 passing yards and 4 TDs while Marquez Valdes-Scantling and Davante Adams each topped 100 yards receiving with 3 combined TDs. The Vikings still can’t stop opposing offenses in the second half of games and they pulled off the win largely because the officiating booth overturned an INT against Kirk Cousins late in the game. This makes the Vikings a good target to stream against for the rest of the season, and just like we saw in the 2nd half of the 2020 season, Kirk Cousins could be one of the top fantasy QBs ROS. Last year, Cousins was the QB6 to finish out the year from this point in the season due to the failing Vikings DEF. That DEF continues to struggle, so it wouldn’t be surprising if players like K.J. Osborn or Tyler Conklin are late-season injury fill-in saviors for your team. Meanwhile, any fellow fans I’ve got out there in the Bold North…we’re stuck riding out the year with Mike Zimmer.

Justin Fields: Left the game with a rib injury. Coincidentally, McDonald’s is re-bringing back the McRib. People: it’s correlation, not causation! With Andy Dalton taking over for the rest of the game, Darnell Mooney finished with 121 yards receiving and a TD. Fields was heating up for fantasy managers but a rib injury can slow down a QB both on the ground and in the air. The Chicago Bears have a short week and face off against the hapless Detroit Lions on Thanksgiving, so don’t be surprised if the Bears play it safe and rest Fields this Thursday while the Red Rocket fills in. Andy Dalton is one of the better backups in the league — indeed, he was supposed to be the QB1 in Chicago this year — so keep Mooney in your lineups.

D’Andre Swift: Speaking of that little man among the giants on the “I’ve rushed more than 32 times in a game” that I posted above, Swift gained 136 yards on the ground and snagged 3 catches for no gain. The Lions were without QB Jared Goff today (and they’ll likely be without Goff on Thursday against the Bears according to ProFootballTalk), so the entire offense again rests on Swift’s shoulders. Although I was the most aggressive ranker on Swift in the pre-season, I don’t feel like celebrating that hit…the Lions are on track to be winless…again…I can’t cheer for that. [sigh] On the plus side, maybe some top draft picks will change the direction of the franchise [uproarious laughter drowns me out]. But if you’re a dynasty manager, Swift is probably the highest upside acquirable player on the market right now. No, you’re not pursuing Swift right now. As things go, Swift will have some lackluster weeks coming up — he can’t be the entire offense all season — and then you swoop in at the very end of the trade deadline and snag him for next year. Hopefully the 2022 Lions have…you know…anybody who can help Swift.

Miles Sanders: Sometimes process fails. Even satellites fall from the sky and we can’t predict where they will spread their radioactive ashes. And sometimes, we don’t know what the Eagles running backs will do. This week, Sanders came off of IL, and on a team that had all but relegated him to a committee-back role, he ended up with 16 carries for over 90 yards. Second-half surge? Sure, whatever. We all like Sanders on paper…or silicon, or whatever. Coming into today, the Eagles gave Sanders less than 10 carries more often than they gave him more than 10 carries, and that sentence is so awful I’m just gonna stop it and apologize. Over/Under 10 rush attempts — flip a coin! But for cereal, we’re talking about an RB that every fantasy manager was benching when he was healthy who is suddenly coming back from injury and getting 16 touches. Add and start at your own risk. The Eagles are still a Hurts-first team, and successful Sanders is more in-game mechanics than pre-game plan.

Michael Carter: I’m not going to point at correlation/causation too much here, but when anybody who isn’t Zach Wilson is the QB in New York, Carter does well. OK, not Jonathan Taylor well, but you wouldn’t complain about a 70-yard rushing performance right now, would you? Carter is RB2/FLEX as long as the likes of Mike White or Joe Flacco are calling games in New York.

Elijah Moore: It’s time to get excited about the 2nd half Jets! Joe Flacco showed that he still has some NFL relevance and gave Elijah Moore the first hundred-yard game of his young career. You want an exciting waiver wire add? (That add is Moore and not Flacco, just so we’re clear) Over the past 3 games, Moore has 25 targets, 260 yards receiving, and 4 touchdowns. The only problem is that you need to deal with the Jets being a carousel at QB. If the Jets resort to “Zach Wilson is the future of our franchise,” then you run like Forrest and find another FLEX play.

Cam Newton: Feels like playing a game of “Would You Rather” and both the choices are kinda meh. Would you rather eat the roller grill hot dog or 1AM Taco Bell? I’ll take the devil I know, thank you very much. Cam threw for 2 TDs and added another one on the ground against the Football Team from the Capitol, which is great for a Panthers team that has been ravaged by injuries and has a long history with Cam. Yes, Cam has been efficient so far. And looking at his schedule…actually I really like the matchups against the Dolphins and Falcons coming up. So, I’m not giving Cam the go-ahead because he’s reinvented himself. Last year, Cam finished as QB18 on a per-game basis, which is wholly uninteresting. Also, while Cam was on the Patriots, he didn’t have a running back like Christian McCaffrey to compete with. Do we think Cam stays on pace for 9 rushing TDs and topping CMC in rushing yards this year? Yeah, you’d rather take the roller grill hot dog, right? So, add Cam at your own risk, but expect more of a floor performance than a transcendent beef and bean burrito.

Deebo Samuel: Of course, when we’re all debating if Jeff Wilson or Trey Sermon were going to replace the injured Elijah Mitchell, it was the wide-receiver Deebo Samuel that finished the game as the 49ers top rusher. Deebo’s been lining up in the backfield recently to help distract the coverages that he’s been attracting. Just imagine that Deebo is an influencer in the backfield and the rest of the 49ers are the average looking Joes and Janes who don’t get free products. Deebo’s rushing yards are great for fantasy managers because they give him a yardage floor not seen with receivers who aren’t named Cordarrelle Patterson. Also, it’s been great for Brandon Aiyuk, who has had 7 or more targets in 3 out of his last 4 games.

Zach Ertz: 2 TDs and he’s been pulling down 5 or more targets basically every game. A lot of the pre-season doubters on Ertz stemmed from the fact that the Eagles wanted to trade him, and nobody really thought…OK, when he’s traded, he’ll be used, right? He’s not the top 3 TE that he used to be — I mean, aren’t we all? — but he’s definitely a starter in almost all formats right now.

Russell Wilson: I get it: sitting out too long in a league like the NFL can lose you your job. It wasn’t long ago when Peyton Manning needed neck surgery and found himself out of a job in Indianapolis…only to return and win a Super Bowl in Denver. Russ, we know your finger is hurt, but let Geno manage this one until you’re healed. Sometimes cooking isn’t about the quick fire, but the low and slow. Wilson was one of the few predictably reliable fantasy QBs coming into this year, and we’re witnessing a great football player become absolutely humbled. Last week — the first week since Wilson returned early from a finger injury — the Seahawks were shut out for the first time in a decade and Wilson completed only 50% of his passes for 161 yards and 2 INTs. Remember: Wilson has Tyler Lockett and D.K. Metcalf as his receivers. Like, you or I could show up to that offense and be somewhat productive with D.K. Metcalf. This week, Russ faced off against a demolished Arizona Cardinals team and put up another lackluster performance of incompletions and no yardage. OK, 200 passing yards. Bleh. I hate to say it, but I’m OK with you moving on from Russ now. A healthy Russ is a top fantasy QB. Whatever we’re watching right now, it ain’t healthy for anybody.