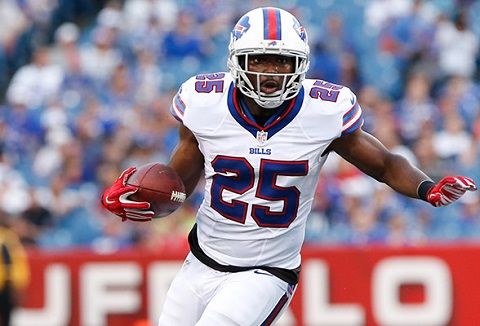 Compels me to write about him, that is, because he’s ranked too low. Specifically, LeSean McCoy being ranked behind Mark Ingram is something I just don’t get. Nothing against Ingram, I like him. I just like McCoy better. Here’s some last minute draft advice with #analysis, starting with the reasons why McCoy should be ranked higher than Ingram…

It turns out that those four “reasons” are basically one reason. They are all about one guy who’s done it before and one guy who… struggles to consistently perform. Now here’s where the #analysis really begins. I’ve listed every decent fantasy season either of these two players has amassed, sorted in order of fantasy points scored.

But fine, if I must, here are the points for Ingram:

In reference to number 1, I guess the argument for a higher ceiling would be in part that Saints offense is better than the Bills offense. I would counter this by saying it doesn’t matter because Ingram’s never done it before and until he does it.. well, as my good friend Scott Pianowski would say “I refuse to get drunk on optimism” (that’s sort of an inside joke between me and a commenter, see the comment section of my post here).

So about number 4.. both guys missed 4 games which makes those 140+ fantasy points each of them scored all the more impressive. But that was last year and we don’t get last year’s stats, we get this year’s stats. I think what McCoy has going for him is that he only scored three touchdowns to Ingram’s six. Both totals could rise but which total looks so low it almost has to rise? Wait am I arguing for Ingram or McCoy here? I mean touchdowns are good, right, and Ingram scores more, you say!

Yes, but it’s about what’s going to happen this year, not what happened last year. So maybe McCoy’s low TD total happened for a reason, maybe it didn’t.  Maybe that reason was Karlos Williams. Maybe it wasn’t.  Karlos Williams happens to be gone now. Also.. regression to the mean anyone?

So, about those ranks.. currently this is what Fantasy Pros ECR for running backs in this range looks like:  8. Devonta Freeman, 9. Mark Ingram, 10. Doug Martin, 11. LeSean McCoy.  Here’s the argument I would make for McCoy versus the other players.

McCoy versus Freeman:  McCoy’s workload is more of a sure thing. McCoy has a longer track record. Devonta Freeman is possibly just as much of an injury risk as McCoy.

McCoy versus Martin:  Doug Martin doesn’t stay on the field enough on 3rd downs and when the Bucs get behind. Doug Martin is possibly just as much of an injury risk as McCoy.

But it seems like I’m going out on a limb with these things. How can I be right when so many others disagree? I guess you’ll have to explain it to me.

Lastly, who else around here loves LeSean McCoy?  Tehol Beddict, that’s who.  I think if he read the above analysis he’d smile and say “Boom shakalaka”.

Jonathan Stewart RB20. I don’t see how a feature back with no competition on a pretty good offense can be ranked this low.  He’s got an injury history, sure.  I guess I like players with injury risks.  It’s a theme, I like the value when all the risk is already built into their cost.  I think he is an incredible value right now.  Carlos Hyde is being drafted 16 spots ahead of him and C.J. Anderson is being drafted 20 spots ahead of him. I don’t get it.

I wrote about Ryan Mathews being underrated previously but on second thought I think he’s about fine where he’s going.  I would target him at about his ECR of 55 overall. Like Jonathan Stewart he has no real competition. I prefer him to players like Jeremy Langford and Matt Jones for talent and job security reasons.  I prefer him to Frank Gore because of Gore’s age and I prefer him to Giovani Bernard because Mathews has a higher ceiling due to workload. Those are the running backs ranked right behind him, which I think is correct.

I want to like Melvin Gordon at his ADP of 66 but I’m just not sure if his workload will be high enough because Danny Woodhead cuts into it.  If you think his workload is safe because he’ll mostly limit Woodhead to passing down work then of course you’ll be targeting him and that’s fine.

Christine Michael is someone I really like as a late round draft choice in leagues of any size. I think there’s a shot Thomas Rawls doesn’t play or plays very little in week one. Of course if Rawls is active but plays very little that won’t help you much in week one because you probably wouldn’t have started Michael anyway due to Rawls being declared active. I think it’s somewhat unlikely, but what if Michael just proves to be better than Rawls? The way that I can see this as a possibility is if Rawls isn’t the same player he was last year due to this ankle injury, which is taking forever for him to get over. It’s probably taking forever because it wasn’t only reported as a broken ankle but also as torn ligament(s).

I guess you could believe Pete Carroll and ignore the risk. He’s saying Rawls will play in week one. Then surely as Romo’s back is just fine, Rawls will play!  According to a Seahawks.com post from back in April Rawls said he hopes to “be ready for camp”. I don’t even know what “be ready for camp” means. Presumably ready to practice. But he wasn’t, at least not from the onset. So that sort of tells you that things aren’t going quite as well as he once hoped.  Anyway, Christine Michael’s overall rank is 141, I’d target him about 15 spots earlier to see what kind of role he has during the first week. I wouldn’t necessarily be worried over Rawls as it is still likely he’ll have his starting gig to begin the season but own Michael just in case. For the upside.