At this point Malcom Floyd is a sleeper.  Everything is looking great for him fantasy-wise.  He has a great quarterback in Philip Rivers (must be a tiny guy if he’s inside another guy, but whatever), he is finally a starter, and Vincent Jackson will miss some game(s) because of his drunkenness, and VJax possibly could also miss a big chunk of games if he holds out.

But I say, “at this point,” because this idea is spreading through the fantasy world like Mrs. O’Leary’s cow just kicked over a lantern full of Malcom Floyd sleeper articles. Who knows how long Floyd’s ADP will remain where it is.  Right now it is at 112 which still makes him a sleeper-worthy pick up, because even if VJax gets back on board and is only suspended a game or two, Floyd is still the #2 wide receiver on a darn good offensive team. 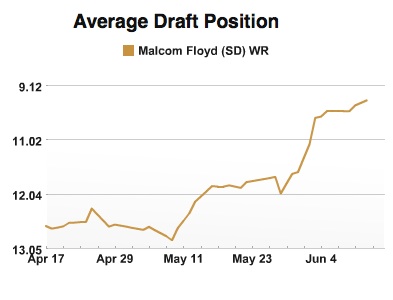 As you can see Mr. Floyd’s ADP over at Fantasy Football Calculator is on a rapid rise.

What you have to do at this point is weigh your options.  If you can grab him in the tenth round you are golden, but say he moves up to the 7th round?  Yes, he has the upside to go there, but his downside can be pretty down when you think that he could have Gates, VJax, Sproles and all of those random WR’s that San Diego seems to get into the endzone, all taking looks away from Floyd.

So you have the Three Floyds, the VJax-less Floyd that becomes the #1 receiver on a high scoring offense, the Floyd who gets a lot of reps with Rivers while VJax is pouting and who builds up a good repertoire with Phil, that leads to more looks even if Jackson doesn’t miss much time, and then the Floyd who gets hyped into going too high and gets lost in the shuffle of a lot of good offensive weapons.

I’ll go with the Malcom in the middle, which makes him a good pickup as a 3-4th receiver. And a dead ringer for coach Payton.  Just watch that ADP and don’t get all crazy!