National Football Post columnist Matt Bowen was gracious enough to answer a few questions for our crazy little blog. He played strong safety in the NFL from 2000-06 with the St. Louis Rams, Green Bay Packers, Washington Redskins and Buffalo Bills.  You should follow him on Twitter because he’s a good guy and has great insight. 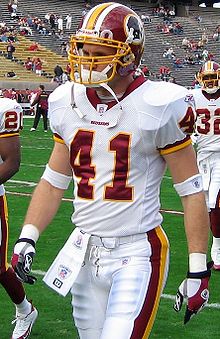 Doc: I’ve always had trouble judging just how good Donovan McNabb is.  He puts up good numbers, but was also in a system that produced good numbers for the position.  I like Kolb based solely on the system and the two games we saw last season when Donovan went down.  Am I overvaluing the offensive system and undervaluing McNabb’s ability? Do you think Kolb can produce for a whole season?

Bowen: The questions I have about Kolb don’t have as much do with system but what we can expect over the course of an entire season. Andy Reid’s west coast system will produce numbers, but how does Kolb react to a 2-game skid, to adversity, to an injury? There was so much we knew about McNabb because he was a proven player and played on the game’s biggest stages. Kolb has the ability and talent to show us numbers, but playing QB in this league is about so much more.

Doc: Watching L.T. last season it looked like he had lost his ability to get to the few holes the Charger O-line provided.  He has always been able to work in space and create, but I haven’t seen that from him for 2 years.  The Jets have a much better O-line, but how much do you think L.T.’s poor yards per carry were the O-line vs. him breaking down?  What do you think L.T.’s role will be in the Jets’ offense?

Bowen: I think LT will produce more out of the pure fact that the Jets O-Line is one of the best in the league, but I wouldn’t put too much stock into him. He didn’t show that ability to get to the second level of the defense once he hit the hole last season.

Doc: Here at Razzball we were pretty hard on Todd Haley while he was sitting Jamaal Charles for LJ, so when J.C. finally got his chance we of course took credit for all of his success.  Now that Thomas Jones has arrived and Charles has proven he can handle 15-25 carries a game, how do you think they’ll be used?  And will I once again be lashing out at Haley?

Bowen: I still see Charles as the back who will get the most carries, but with Haley handing over the keys to Charlie Weis, there will be some give and take. I would look for Jones to play a big role in the red zone, which might cut down on Charles impact in Fantasy.

Doc: I saw that you felt the signings of Willie Parker and Larry Johnson could motivate Clinton Portis to work a little harder and maybe put his game back together.  I agree, but also fear Portis might need a team of the Six Million Dollar Man surgeons to keep him whole for an entire season.  Who do you think will end up with the most touches for a Redskins’ running back?

Bowen: I see Clinton Portis as the starter heading into camp, but I do feel that job is up for grabs with a new head coach. Portis will have to earn his job and we should know who will carry the ball first by mid-August.

Doc: Early last season Joe Flacco looked poised to have a breakout campaign, but injuries slowed him down in the second half.  With the acquisition of Anquan Boldin do you see him becoming a fantasy type quarterback or will the Ravens continue to gear their offense toward the running game?

Bowen: Baltimore is still a running football team but the addition of Boldin does give Flacco an underneath option and will alter the play calling in BMore. Look for the Ravens to use Boldin in the bunch and stack sets where he can catch the ball in open space, which leads to YAC. But, he isn’t a vertical player.

Doc: The Raiders’ situation is always one to avoid in fantasy football, but they do have some talented or should-be talented offensive players like Darren McFadden, Michael Bush, and Zach Miller.  Do you see Al Davis trying for Jason Campbell or Marc Bulger or does he think Russell is still the quarterback of the future? And do you believe it will be a Smash and Dash type situation with Bush as the Smash and McFadden as the Dash or do you see one out playing the other?

Bowen: I would avoid Oakland if Russell is the guy, which it sounds like he is going to get every chance possible to start. The issue is that the running game will suffer with Russell because of the turn overs and the field position he puts them in.

Doc: I am looking forward to grabbing whatever running back the Chargers end up drafting/trading for.  If you had to put money on it, or at least someone else’s money, who do you think the Chargers will end up with at RB?

Bowen: If I am running the Chargers I draft–or trade for–a power back. Think of Marion Barber or rookies Ryan Matthews, J Dwyer or T Gerhart…. The Bolts run a downhill power attack under Turner, basic and effective.

Doc: You wrote that Mike Martz can use Greg Olsen more effectively than he has used tight ends in the past, which has been a concern for his fantasy owners.  How do you think Matt Forte will fare under Martz’s tutelage?  Is his starting position under peril with the acquisition of Chester Taylor?

Bowen: I think both Forte and Taylor will see touches…. I would have to think that Taylor could be the guy based on the money paid, but both will be dynamic under Mike. He uses his backs very creatively out of the backfield and will align them removed from the formation as well. They should have an impact in the passing game.

Doc: Do you ever play fantasy football?  What do you think its impact has been on the fan base?  You can tell us what you really think.  We know we’re nerds.

Bowen: Have played fantasy for the last two seasons. Rolled with Chris Johnson last year, so I ended up in my league championship… huge impact on the NFL and the biz of NFL.