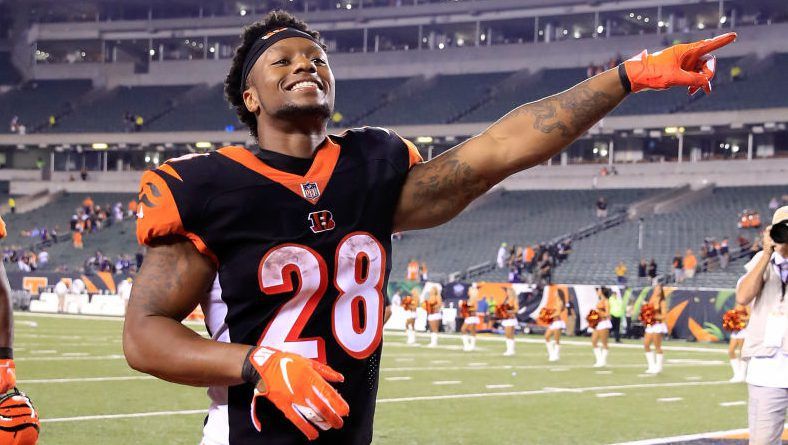 You know that things are mixed up when the Browns and the Bills beat teams with a combined 6-2 record coming into Sunday. More on one of those games after the jump. In the primer, I always give our readers a weather forecast. Let’s be clear, rain really doesn’t matter as much as you think it does at this time of year. Pat Mahomes threw for over 300 yards against a very good defense. The weather wasn’t the reason that he didn’t throw for a touchdown, it was the Jaguar’s secondary. 60 degrees and rainy is a lot different than 37 degrees and rainy and I’ll do my best to express that going forward.

It was pretty hard to predict Miami’s backfield coming into this week. I thought that Frank Gore would lead the backfield in rushes and he doubled Drake’s touches on the ground. However, Kenyan Drake had the better fantasy day and was able to wipe some of the sweat from the brows of his fantasy owners. Drake led the team in receiving yards with 69 (nice) and was able to score a touchdown. Other than that, there wasn’t much going on with the Miami Dolphins offense besides giving two touchdowns to the Bengals. Kenny Stills just isn’t living up to the hype.

Joe Mixon returned to the Bengals backfield and made his presence very well known. He rushed for over 90 yards and caught a touchdown pass for the 4-1 Bengals. The big question coming into this week was who would be the valuable Tyler Eifert replacement? C.J. Uzomah and Tyler Kroft combined for 3 targets and Uzomah caught two passes for 43 yards. Tyler Boyd came back to Earth while catching 4 balls for 44 yards. A.J. Green led the team in targets and capitalized by with 110 yards.

Blake Bortles threw the ball 61 times and didn’t have single 100 yard receiver. Bortles also threw four interceptions. This offense is such a mess. T.J. Yeldon continued to be the YPC king averaging 5.3 yards per carry on the day while catching a touchdown pass. Donte Moncrief led the Jaguars with 15 targets but wasn’t able to score a touchdown.

Pat Mahomes threw his first two interceptions of the season on Sunday but ran for a touchdown and threw for over 300 yards against a stout secondary. This is a great sign that he can hold his own against any defense in the NFL. Kareem Hunt has continued to bounce back from a slow start while running for 87 yards and a touchdown. Tyreek Hill has been slowed down from his blazing start but not necessarily to a screeching halt. He carried the ball twice for 25 yards and caught 4 balls for 61 yards. Travis Kelce finished 2nd at the tight end position behind only Zach Ertz with a 100-yard day.

Cam Newton didn’t have his finest effort of the season but he was able to lead the Panthers to a W. Christian McCaffery didn’t quite get to the 100 yard mark, but he was able to score on a Cam Newton pass in the 4th quarter. Curtis Samuel came alive with a very nice touchdown catch, but other than that, the ball was pretty spread out among Panther’s targets.

Saquon Barkley has put together a really good season so far. Even when he’s not able to find much production on the ground, he is able to scrap together some very fantastic days. He caught two touchdown passes and one of them was from Odell Beckham Jr. Speaking of Beckham, he had a fantastic day after his controversial interview. Beckham doubled everyone on the Giants in targets and caught 8 balls for 138 yards and a touchdown.

This was finally the game that Antonio Brown owners were looking for. Brown went for over 100 yards and scored twice. James Conner took advantage of a weak Falcons defense and gained 185 total yards while scoring twice. Roethlisberger had a good day because he was playing at home. Although 250 yards isn’t much to write home about, three touchdowns is pretty serviceable. Juju Smith-Schuster also caught a nice touchdown pass.

Calvin Ridley came back to Earth and wasn’t able to find the end zone. However, Mohamed Sanu did score once and had four catches for 73 yards. Julio Jones was held scoreless again and was held to a bland 62 yards on 5 catches. Austin Hooper led the Falcons in targets and caught 9 of them for 77 yards. Nothing happened on the ground in Devonta Freeman’s return. Neither he or Tevin Coleman were able to get anything going.

Aaron Rodgers had a huge day despite missing a couple of his key weapons. This is the first time this season that he has justified being the first QB taken in fantasy drafts. Davante Adams took advantage of trying to catch up with the Lions on the score board by turning 12 targets into 9 catches, 140 yards and a touchdown. The split in the backfield wasn’t beneficial for anyone from a fantasy football standpoint. Aaron Jones paced the Packers with 7 carries for 40 yards but Jamaal Williams was close behind carrying the ball 6 times.

I was a year early on Kenny Golladay but it doesn’t matter because the kid can play some football. Golladay caught 4 passes for 98 yards and a touchdown. Golladay also led the Lions in targets. Kerryon Johnson is obviously the most explosive and talented back in the Lion’s backfield, but that doesn’t mean Legarrette Blount can’t poach a couple of red zone touchdowns. You’re going to have to keep an eye on Kerryon Johnson’s status going forward because he got a little banged up on Sunday.

Demaryous Thomas finally busted out of his slump and had a good fantasy day. Thomas had his lowest target total of the season (6) but turned them into 5 catches for 105 yards and 42 yard touchdown. Emmanuel Sanders was targeted 12 times and caught 9 passes for 72 yards. Phillip Lindsay continued to lead the way in the Denver backfield with 12 carries for 61 yards. There is no positive way to look at Royce Freeman only touching the ball 5 times no matter how big of a hole the Broncos were in. This backfield is being mismanaged and its frustrating.

It was apparently avoid Quincy Enunwa day. After being Sam Darnold’s favorite target through the first 4 games of the season, Enunwa didn’t catch a single pass on Sunday. Robby Anderson, however, had his best game of this young season turning 3 catches into 123 yards and two touchdowns. This was Darnold’s most promising start since week 1 against the Lions. This is going to remain a split backfield despite Bilal Powell’s fumble. Isaiah Crowell did have a MASSIVE day taking 15 carries for over 200 yards and a touchdown. For whatever reason, Powell carried the ball 5 more times than Powell. Sell high on Crowell if you can.