Breaking News: There is a report coming out that states Drew Brees has a torn rotator cuff and will miss the rest of the season. (There are now other reports being released that he’ll be out for “several” weeks or miss no time at all…) As of this writing, nothing has been confirmed yet, but if the original report is true, then the entire Saints offense takes a huge hit, especially Brandin Cooks and Brandon Coleman. It would have affected Marques Colston, but he’s been dead for two years. More importantly though, this news will give us a Sunday Night Football Week 4 match-up between Brandon Weeden and Luke McCown. Oh boy.

Tonight on Monday Night Football, Todd Bowles has the chance to start the season with a 2-0 record. What other Jets coaches have started 2-0, pray tell? Well, Weeb Ewbank didn’t do that back in 1963, but I believe an Ewok in Return of the Jedi was named after him. In the great (lol) history of the New York Jets, you have to go just a mere few decades back when in 1994 (gasp) Pete Carroll accomplished that feat. He then went 6-10 and got fired. Al Groh went 4-0 in 2000 (after Bill Belichick abruptly resigned), finishing the season 9-7, missing the playoffs. And then, of course, Rex Ryan started 3-0 in 2009 where they lost the AFC Conference Championship to the Colts. I think it was because Mark Sanchez was overweight at the time. After all, the defense just got too tired carrying him all season. Fast forward to present time (I know it’s hard for Andrew Luck to adjust from the paleolithic period) and we might have a Jets team that is capable of not being the Jests, if you know what I mean. Going against a Colts team that many favored to walk into the playoffs (mostly because Luck’s back has a caveman’s width to carry such things) and beating them would confirm that these are not, in fact, your run-of-the-mill-sh*t-the-bed Jets that we’ve come to love and pity. Or at least it would confirm that they are waiting until midseason to spiral into the abyss. So until then! 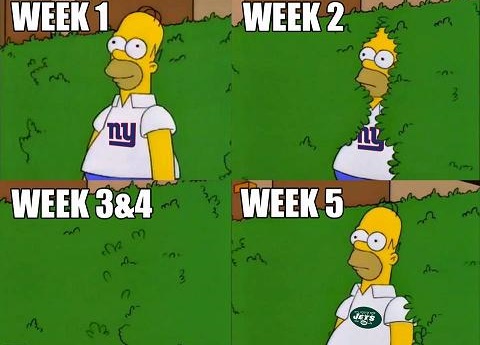 13.7 – The percent of the teams that lose their opener and went on to win their division since 1978.

∞ – The amount of times Fitzmagic will happen tonight.

Bilal Powell gets the ball when Chris Ivory should have.

Fitzpatrick does something that makes you want to call him Fitzmagic. (Baby sips…)

Jeremy Kerley does something good.