After giving away a win to Peyton Manning and the Broncos last week, the Chiefs look to move to 2-1 against the Packers who are from the bay that is green. I believe that’s also the name of a Dr. Seuss poem. Or maybe I’m just a poetic person. OR MAYBE WHO CARES. Much like how I feel about this game. Sure, on paper the match-up is interesting, only because the principle cast involves guys like Jamaal Charles, Randall Cobb, Aaron Rodgers, Eddie Lacy… okay, I’m seeing a theme here. The principle cast is essentially from Milwaukee. But don’t let that dissuade you from not being entertained, we actually get another chance in our lives to see if Andy Reid will find some way to psychically eat his timeouts. I’m assuming he’s done so with the challenge flags, thinking they were ribs with ketchup on them. The game will essentially come down to how healthy Eddie Lacy and Davante Adams are, both suffering from ankle injuries this week. Both have practiced this week and are probable for tonight’s game, but if we’ve learned anything from semi-injured players miraculously being able to be suit up for their games this year, it’s that they’ll break your hearts and then punch them in the crotch. A heart-crotch punch, if you will. (See Anderson, C.J..) I’d say we’re in for an interesting game, but since it’s Monday Night Football, I’ll just say we’re in for a game. A football game, hopefully.

2 – The number of touchdowns Denver scored in the last 36 seconds to win the game in Week 2 against the Chiefs.

5 – Chiefs turnovers against the Broncos in Week 2.

5 – Apple turnovers that Andy Reid can eat in one sitting.

18 – Consecutive home games that Aaron Rodgers has not thrown an interception.

2005 – The first overall pick this year was Alex Smith. That’s the joke. 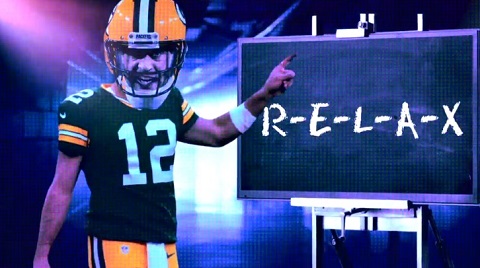 Jamaal Charles isn’t involved in the play but should have been.

When given the opportunity, I will never not use this. You have my word.

Chiefs – Whatever, just as long as they lose.*

Packers – Whatever, just as long as they win.*