I remember back in the olden days when watching NFL games I had to wait every ten minutes for Verne Lundquist to tell me the scores of each game with absolutely no context.  Kind of like when Tom Hanks was stuck in Apollo 13 and was without power.  Just like that.  But finally the NFL has gotten a bunch of young hot shot NASA genius types together in a room which are lead by our guest today, Scott Hanson.

Mr. Hanson is the host of NFL RedZone which is like fantasy football crack.  No longer do you have to wait for highlights.  RedZone is all highlights, but live!  I decided to get the sports package that included NFL RedZone last season and my quality of life increased tenfold.  And Hanson beautifully weaves the games together in a poetic tapestry of blood, guts and ballet.

I caught up with Hanson via Twitter and he took some time to answer a few questions.  Follow him @Hansonscott and get NFL RedZone.  You won’t regret it! 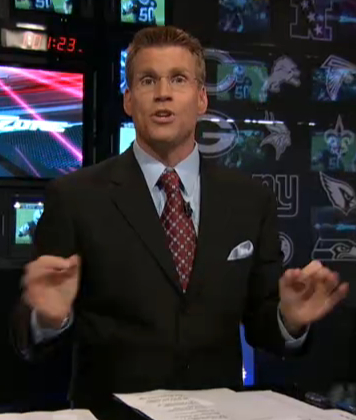 1. How did you prepare for your first NFL RedZone broadcast?  It seems like something that has never been done before.  No commercials, constant evolution in the games, and you have to keep it all together.  That first Sunday had to be nerve racking!

As my mom jokes, “you’ve been preparing for this all your life.”  She was always amazed at how I could get excited about two or three games simultaneously.  And when I was younger in my TV career (at local affiliates), the best place to be was in the sports dept in front of our wall of monitors with a bunch of games going on.  As for 6-7 hours with no commercials… there was no preparing for that.

2. Being a live program you are bound to make a gaff here and there.  Are there any that stand out in your memory?

When Ryan Fitzpatrick took over in Buffalo, I called him Sean Fitzpatrick (the name of a buddy of mine) a few times.  Sean has never started for the Bills that I know of (but might be worth consideration.)

3. With NFL Red Zone coming to mobile devices do you think we’ll see an uptick in church attendance?

I apologize to pastors everywhere if so.

I don’t know the percentage, but fantasy players are absolutely on our minds when doing the show.  I told our audience in week 15, I wanted them to tweet me their fantasy stories when Jerome Harrison went for 286 and 3 TD’s.  People’s seasons lived and died on that one performance.

5. Fantasy football often is blamed for watering down loyalty to individual teams, but also praised for spreading knowledge of football and a variety of teams and players. Do you feel that NFL RedZone might lead to fans viewing the game differently?

I said in the first :30 seconds of the first show that we hoped this would change the way people watched football, and I think we are on our way.  Now, I don’t ever think we will replace people’s love of watching “their” team.  But when your game is not on, come on over to us and watch every game.

6. According to the Wall Street Journal “the average amount of time the ball is in play on the field during an NFL game is about 11 minutes.”  Do you feel the NFL RedZone is a response to this disparity?

I think the American sports fan loves “action.”  And NFL RedZone is concentrated action.  You just have to trust us, and we’ll take you where you need to go, when you need to be there.

7. How do you see NFL RedZone evolving for next season?  Are holograms in the future?

We’re already planning some new bells and whistles, but you’ll have to tune in to find out.  Possibly more cowbell.  Or holograms of cowbell.

8. I know you have some restrictions on what you can show and when.  Do you think those restrictions will stay the same, shrink, or get stricter?

The funny thing about that is I’m the last to know.  Sometimes they tell me in my ear as we’re live.  I don’t feel the product has ever suffered though.

9. Since you know what it’s like to be kissed by Chad Johnson, do you have any tips for the contestants of his new reality dating show “The Tournament”?

Turn the other cheek.  And perhaps lace up some Reebok Zig Techs in case you have to run away.

10. Is Brett Favre’s lawn as magical a place as it looks? And did you find the fountain of youth somewhere on his property that Ponce De Leon searched so long for?

Yes, it is rather enchanting.  Whether it be the semi-trucks whizzing by at 80 mph, honking their horns as if they were the first to pass by all day… the smell of manure being spread on the back 40… or the fire ants which wait for a miss-step and devour any food accidentally dropped by a TV crew… it is a place for reflection, introspection, and absolutely no decisiveness.

11. After sitting 7 hours behind the NFL Red Zone desk do you ever think a catheter might be a way to go?

I have some very funny answers to this, but can’t risk it here.  Just know they were very, very funny responses.

12. Do you ever play fantasy football?  If so, what do you think your best team name has been?

I do.  All of my team names have been inside jokes though.