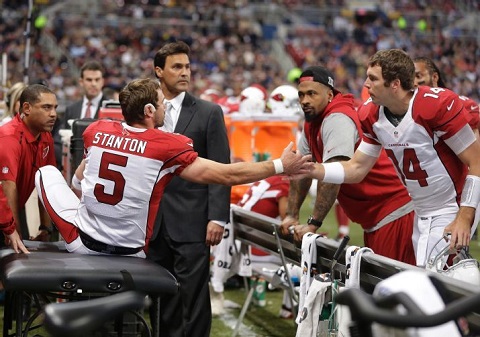 So, that was an interesting game. If you don’t like touchdowns that is. To be fair, we weren’t promised anything, and with Thursday Night Football hosting at least 485 blow-outs thus far, I guess last night’s game could be considered a welcome change of pace. Sort of like going from watching a giant monster truck crash into a mobile home to watching paint dry. Yeah, a lot like that. But hey, it’s not the Cardinals or Rams fault. They actaully seem to be quite similar; good defenses, less-than-stellar offenses, and, of course, there’s the injury bug. Sam Bradford is old news at this point, and Carson Palmer is, just, well, old I guess. Andre Ellington is a recent casualty. And, of course, Drew Stanton had his ankle implode in the third quarter, ushering in the age of Lindley. Ryan Lindley. Just think of it this way: we are living in a world where Lindley might possibly end up leading the number one seeded team through the playoffs. Yeah, note to Cardinals players… you can go ahead and schedule all those free weekends in January now…

Ryan Lindley – 4/10, 30 YDS. Somewhere, a CFL quarterback sits in a corner and weeps at the fact that Lindley is in the NFL. (To be fair, he does have the arm strength to stretch a defense horizontally, no offense Chad Henne.)

Kerwynn Williams – 15 CAR, 75 YDS and 2 REC, 11 YDS. Is it just me, or does he sound like a car dealership? Kerwynn Williams Ford and Pontiac. See! I had thought that Stepfan Taylor (14 CAR, 61 YDS) would get the first chance and they would go from there, but as of now, it looks like a true RBBC.