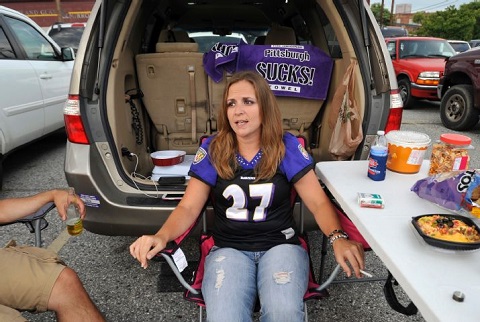 They don’t call it the Charm City for nothing!

God, these teams are both terrible. At least that’s what I got from last night’s game. I remember when this matchup was good. Now it’s like watching a fight in the old age home between two withered, senile dudes in diapers. One thing’s for sure, The Ravens overcame a lot of adveristy last night, if adversity means the Steelers. And, to Pittsburgh’s credit, they all looked remarkably calm for being on a boat that’s sinking. For the complete recap of the game, I’ve compacted it into one sentence for each team, so as to limit your suffering: Ravens — Six trips inside the 20 and two TDs. (Thanks, no, we were just looking.) Steelers — Even by Todd Haley standards, that was some sh*t playcalling. (“HOW DO I FOOTBALL?”) But hey, you have to admit, Joe Flacco looked at least 2% more elite with that rugged beard.

Benard Pierce – 22 CAR, 96 YDS and 1 REC, 7 YDS. Yes, he had a better night than Justin Forsett. I’ll wait a little bit longer before I eat crow, because I am in belief that three quarters of 3.0 average-yards-per-carry until garbage time against a terrible Steelers team isn’t really convincing of anything.

Justin Forsett – 8 CAR, 56 YDS and 4 REC, 16 YDS. While I’m on the Forsett bandwagon, that’s only in terms of this specific tandem. I was adamant that spending a top waiver wire claim, unless you had a black hole at the position, was probably over doing it, and I have to say that I’m not sure I want any part of the Ravens running game right now.

Dennis Pitta – 3 REC, 30 YDS. So… anybody else that started Pitta this week want to play leap frog with a dumpster right now?

Torrey Smith – 1 REC, 10 YDS. Soooo, has someone formed a search party yet? (Told ya! Makes up for telling you to bench Pierce, right? RIGHT? Look, I’m always low on Smith, and really will choose any warm body to start over him. His production is too random for a team that doesn’t gain yardage in huge chunks… basically what his only purpose is. Little did I know that Flacco agrees with me… which makes me feel elite.)